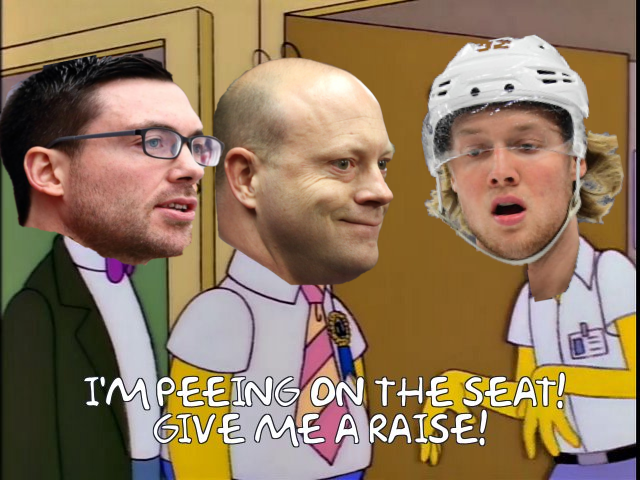 Stan Bowman certainly has a type. He likes ‘em fast. He likes ‘em to have big shots. He likes ‘em to have potential that’s eminently tappable. And StanBo gets what he wants, even if it takes trading a statistically solid 20-year-old defenseman from a team that is seriously going to ice Olli Maatta and Brent Seabrook as its second pairing, anno domini 2019. That’s how we end up with Michael Nylander’s son, aka William Nylander’s brother, staring down a spot on the first line.

A Brief History: In the process of prominently displaying my ass over the Alexander Nylander acquisition—or being one of the young go-hards spit roasting Stan Bowman as McClure so eloquently essentialized it—I accidentally did a primer on Nylander. Here’s where we landed on him back in July.

We worried about where a guy like Nylander would fit, acerbically wondering whether Mayor Jeremy would try to shove him into a spot on the top line to prove what a monumental genious Stan Bowman was for getting him. And lo, dear reader, that’s precisely what they’re doing.

The calls for Nylander to play with Kane and Toews began almost immediately, based primarily on a first-round pedigree, Nylander’s genetic stock, and the consistent beat writer drumbeat that this year won’t be so bad and that Nylander may have just needed a change of scenery. I’m here to shit in your milkshake. It’s what you come here for.

Nylander has played 19 games in the NHL. Twelve of them came last year, where he saw most of his time with Conor Sheary and Evan Rodrigues, who were, I guess, the second or third line. There weren’t many patterns in his stats there, other than he and his mates were consistently and deeply underwater in both GF% and xGF%.

Now, Buffalo’s offense as a whole did suck, so it’s possible that coming over to the Hawks—who, despite eating glass on defense, are still a strong offensive threat—might goose those numbers. But watching him in the pre-season, where he’s slotted to the left of Toews and Kane, hasn’t really fleshed that out.

Nylander hasn’t looked bad by any stretch. He obviously has decent vision, good speed, and a good shot. But his play away from the puck has tracked fairly in line with what both scouts and Sabres fans (pardon my redundancy) hated most about Nylander. In short, he tends to loaf when he doesn’t have the puck. When he’s not loafing, he’s floating on the perimeter, hanging around the fringes (you’d think that would tug at our heartstrings, but alas).

This isn’t to say that pre-season hockey is representative of, well, anything. But for a former first rounder with a supposed ton of offensive potential who had trouble cracking the Sabres’s roster over the past three years, it’s sort of all we have. It’s not great, it’s not awful. It’s just there. And against what’s primarily been AHL rosters, you’ll pardon us for occupying a David Byrne headspace about that.

It Was the Best of Times: Nylander rewards the organ-I-zation’s belief in the Strome Effect and unearths the offensive monster inside of him. He fills out the Top 6 next to Toews and Kane, scoring 30 goals and potting 80 points. He becomes more engaged away from the puck (e.g., finding seams in the slot, continuing to develop his ability to set picks for Kane), forcing opponents to focus their best defenders on this line and opening up the ice for the DeBrincat–Strome–(heavy sigh) Shaw line. He’s the missing piece of the Hawks’s all-offense, all-the-time strategy.

It Was the BLURST of Times: Nylander does what he’s always done: flatters to deceive. He’s caught scratching his ass when the puck isn’t on his stick, which forces Toews to revert to the defensive side of his skillset, essentially neutering Kane’s playmaking. But the Hawks keep him in the Top 6 for half the year, because Stan Bowman is a trade genious who was in the GM chair for three Stanley Cups, which is definitely not something a cold glass of orange juice could have done with the rosters Uncle Dale served him on a platter.

As the Hawks sink farther into the abyss as the year slogs on, Nylander ends up in the AHL in favor of, like, John Quenneville.

Prediction: Nylander will get every chance to stick on the top line because DAT DYLAN STROME WUZ BAD BEFORE DEY TRADED FERIM MY FRENT. But he’ll end up on the third line with Saad and—fuck I guess Kampf?—because Kubalik is the actual guy who belongs in the Top 6. He’ll be Brendan Perlini II: showing flashes of the potential everyone keeps saying he has that are overwhelmed by lackadaisical off-the-puck and defensive play.

We want him to succeed. We want it to be a just-needed-a-change-of-scenery situation. But Alex Nylander’s career thus far has been a lot of peeing on the seat. It’ll be a Grimey ride.