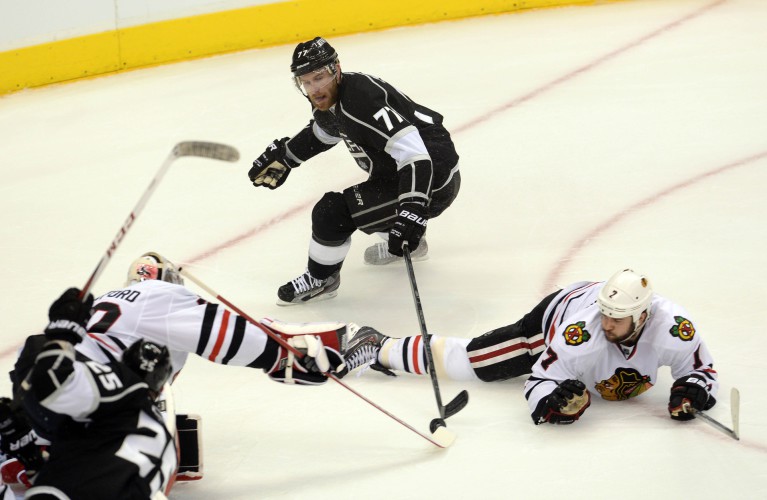 While the Hawks weren’t near the top of their game and the Kings certainly upped theirs, we’re talking about a broken-stick goal and some pretty nifty Quick saves in the 3rd leading to a one-goal loss in a building where the hosts haven’t lost in two months. Excuse me while I set my hair on fire. Oh wait, I don’t have any hair. So I guess we’ll just calm ourselves down with the notion that it was highly unlikely that the Hawks were going to get both of these games and move on to Thursday night. Deal?

-But you want analysis, so let me do my best. The Kings clearly were determined on not letting the Hawks have such an easy time of it out of their zone. And at home, where they can pick the matchups, they got to isolate Rozsival and Leddy against their top line and shield Voynov and Muzzin from having to do too much work in their own end where they struggle. And here you get tonight’s first goal where 8 and 32 got a little yippy, Voynov was allowed time to pick his head up, and there you go.

-The Kings also made sure to be more careful with their dump-ins and keep them away from Crow. While no one will ever confuse Crow’s puck-handling skills with Fatso or Mike Smith, he did a very effective job of either stopping the puck around the boards and letting someone retrieve it with speed or passing it himself past the first wave of Kings forecheckers. Tonight, you saw a lot more chips and cross-corners and off the glass, where they could be right on the first d-man to retrieve it. They also once again collapsed on the Hawk forward supporting, cutting off those short passes that the Hawks had used so well in the first two games to get out.

Next game the Hawks will have to do a better job of reversing the puck and moving it a little quicker to get themselves out of trouble. They may have to do more five-man breakouts than four-man, but at some point that will open up the chips into space in the neutral zone for their forwards to flag down.

-Ok, so I guess the big complaint tonight is Patrick Kane. Let’s address that. While we’d like more from Kane and have called for so all playoffs long, people are acting as if he can just turn on a switch and the Kings have nothing to do with it. Both Scum last round and L.A. this one probably have a list of tasks somewhere, and I bet stopping Kane is right near the top if not first. As soon as Kane gets the puck he has two guys flying at him, and Handzus isn’t quick enough to get somewhere to give him an outlet. Kane seemed to be cycling back more to try and get the puck deep and carry it up, but even there the Kings improvised and cut off his space.

Asking Kane to go flying into people along the boards and suddenly turn into T.J. Oshie or something is folly. Yeah, he probably could try and engage a little more in some scrums, but he’s not going to physically dominate anyone.

Q could give him some help by flipping him with Hossa, so that Bickell and Toews could open up some space for him better than Sharp and Handzus can. But I’ve been saying that so much my throat has become stripped to the point I’m vulnerable to the cancer you get from going down on Catherine Zeta Jones, apparently (a trade I think a lot of us would happily make, by they by).

It’s not that Kane isn’t trying or doesn’t care or whatever other Seuss-ian nonsense is floating out there. He’s being specifically targeted. And with those two guys flying at him all the time, that’s why Handzus has had more space than we ever thought he’d get.

-Despite his silly high-sticking penalty, Duncan Keith continues to be everywhere. Best he’s played since 2010, if not even better than that.

-This was one of my points about the Kings before this series, and that’s they really struggle to get away from you. They don’t have the offensive punch, especially without Richards and Kopitar struggling, to blow you out. While they were dominant for most of the first two periods, they let the Hawks hang around and that’s going to bite them in some other game they lead somewhere around here. Usually they’ll take those odds because Quick makes it work. Not so sure it will here every time.

-Jeff Carter was excellent, especially in his own end, which is not a part of the game I thought he had.

-Drew Doughty was mostly strong, but his bad tendencies came out to let the Hawks back into this one. He chased into the corner after the draw even though Regehr had Hossa covered. Even if he hadn’t fallen down, he wasn’t getting back to Bickell who had all day to walk out in front. He simply tries to do too much at times, which is natural for someone still only 23.

-I thought that was as smooth and controlled as Crawford has looked all playoffs. As good as he’s been, there are games where he’s making the saves but he doesn’t look square or fluid. Tonight he did.

-Dave Bolland played 7 minutes. And that’s with some penalty kill time. It’s obvious the book on him is shut.

-Oduya’s game is heading in a direction that doesn’t make me feel good things in my tummy. Stop the rot.

While everyone is going to say it’s a series now, that can be mostly snuffed out with a win on Thursday. Which wouldn’t have been all that far away tonight. I kind of feel like I did after Game 3 against Minny, not that the Kings aren’t significantly better than the Wild. They are, but it feels like the Hawks don’t have to change all that much to overturn a pretty small margin here. That’s what I look for in Game 4.