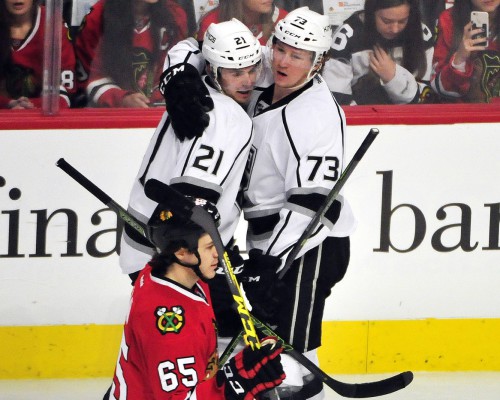 When you play two first place teams in a row, and you lose by a combined score of 10-2, that’s not exactly encouraging. If you chalk it up to the normal nonchalance of the Hawks at this time of year, that’s pretty extreme nonchalance even from them. While this one looks bad, I’m not sure it’s quite as bad as the scoreline would indicate. Although, when they don’t get a power play goal, this has kind of been what it has looked like.

But to the point, in the first two periods when the game was still either tied, within one, or within two, the Hawks got some prime looks from down low. They hit the post twice, they missed the net twice, and had one or two others saved or deflected that on another night would have turned the game in a vastly different direction. Falling behind the Kings is never a good idea because they can just sit around their net and dare you to get shots through from the point, which is what they did basically after Lecavalier scored. But early in the game, the Hawks could have put themselves right there.

That said, through two periods, the Hawks had six even-strength shots. You’re not going to win any games with that total, even if that’s what the Kings specialize in. The past three games the Hawks have played three of the best ES teams in the league. They’ve gotten one point. And I don’t think that’s an unfair measurement of what they are. Let’s get to it.

-Ok but the first two Kings goals are excellent proof that the Hawks have some problems on defense. While the first one wasn’t the best rebound from Crow, Rozsival was at the top of the circle when the puck was lying right in front. On the second, Seabrook got way too distracted by the puck, was too far over on the left side, and then couldn’t catch up to Milan Lucic who isn’t exactly a burner. Hey, guess who had the worst Corsi mark for the Hawks tonight? No go on, guess. I bet you can do it.

-For some reason Q thought he would pair Seabrook and Hammer tonight, and that slow-footed pairing basically allowed Lucic-Kopitar-Versteeg to get just about whatever they wanted tonight. I thought the Hawks had the other three Kings lines pretty well collared, but that one went nuts against a pairing that couldn’t win any of the races.

-Strangely, Q wasn’t as match-y up-y with his forwards, as Teuvo’s line saw as much time against Kopitar as Toews’s did.

-Speaking of Toews’s line, somewhere in these last 12 games it might be worth seeing what Weise can do with Toews and Ladd and what Hossa can do with Teuvo. Because it’s hard to ignore that Hossa isn’t a top line player anymore. There was a telling moment in the first, on the kill, when Hossa skated the puck into the Kings zone and tried to kill time by “posting up” on Schenn along the boards. Schenn took the puck away from him as if he were an AHL-er and never saw a weight room. I’m not saying Weise and Hossa should permanently switch, but see if it’s a viable alternative when things go sideways.

-One day someone is going to ask Q to explain what it is TVR does well. I can’t wait, because I can’t figure it out.

-The Kings’ kill was aggressive as I’ve seen any team be against the Hawks’ PP this year, and the Hawks actually navigated around it very well. They just couldn’t get anything to go in.

-At least they didn’t give up a PP goal?

-Crow definitely gave off an air in the 3rd of, “If these fuckers aren’t going to bother I don’t know why I should.” At least Hawks fans should hope so. But it is worth noting that Luongo, Mrazek, and Holtby, all the goalies that were performing at the same level as Crow for most of the season have all suffered a recent dip. If Crow is having one right now, that is a major, major problem. But you can’t be upset about it, because he’s been playing so far above his head and bailing his team out so much that you can’t ask for that forever.

-I think Panarin and Kane just tried another cross-ice pass that didn’t work.

The schedule lightens up now. The Flyers on a second of a back-to-back, Jets, Wild, one date with the Stars before a sojourn to the wastelands of Western Canada. If the Hawks want to get healthy, they’ll have every chance. The Blues did them a favor by coughing one up to the Flames somehow.