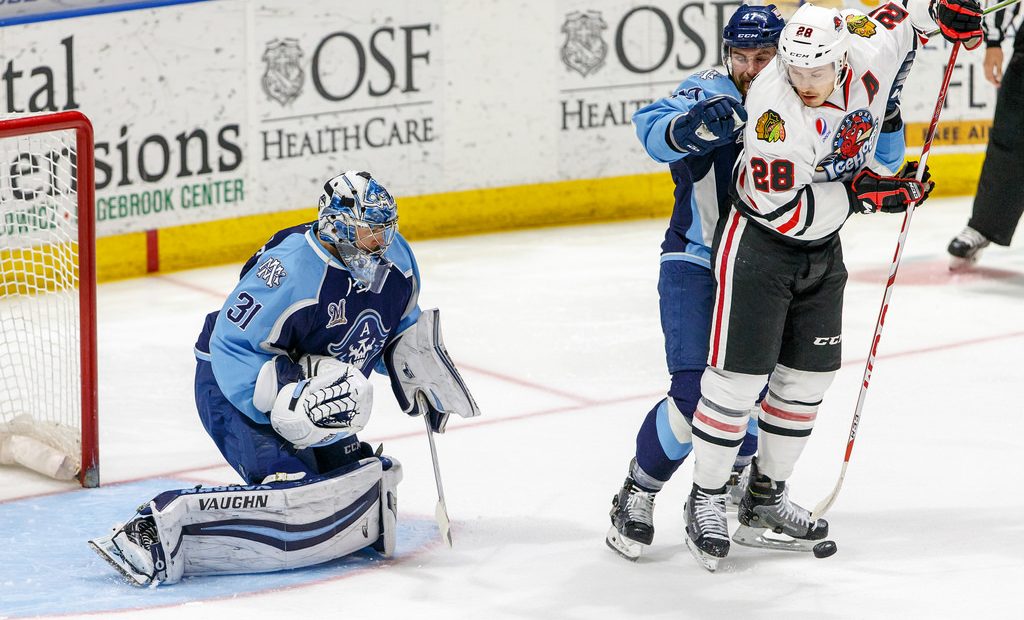 The goal of the Rockford IceHogs as the Blackhawks AHL affiliate is pretty clear cut. Winning is secondary to pushing talent through the I-90 pipeline. Success means that Stan Bowman can stock his roster with quality players (or offer that talent around the league for annual cup runs, take your pick).

Obviously, Chicago’s run at the top of the NHL has prevented Bowman from selecting an franchise-type skater in the first-round the last several seasons. There are plenty of difference-makers on the current Hawks roster that honed their games in the Forest City. Corey Crawford. Niklas Hjalmarsson. Andrew Shaw.  (oops).

By the way, Rockford apparently beat Milwaukee 5-2 Tuesday and then dropped a pair in Charlotte over the weekend. Didn’t catch a second of one game; I was behind a sound board making sure an audience could hear a tale as old as time this week.

I promise that you’ll get the usual breakdowns starting with next week’s post. Until then, I thought I’d shine a beam of light on some of the fortunes of Chicago’s recent picks toiling in Rockford and…well…other places.

The IceHogs have two of the Blackhawks recent first-round selections among their top scorers this season. That would be Mark McNeill (2011) and Ryan Hartman (2013).

McNeill had a pair of goals in a 6-3 loss to the Checkers Saturday. He is now pacing Rockford with 37 points and is tied with Tanner Kero for the team lead in goals with 19. He’s been wearing an A on his sweater for most of the last few months since coming back from a lower body injury that saw him miss a month of action.

When McNeill first came up in short stints with Rockford after his final two junior campaigns, I have to admit that I wasn’t impressed. He just didn’t seem comfortable. Once he became a full-time Hog, however, he has shown a nose for the net.

After leading the team in goals (23) a year ago, McNeill has played some pretty consistent hockey at the top of the lineup. He has points in 21 of his last 28 games.

As I mentioned last week, McNeill is a restricted free agent come season’s end. I’d imagine he’s done enough to get a bit more rope from the organization. At this point, he’s a property worth hanging on to (or at least trading for some kind of return).

Hartman was Rockford’s most improved player over the course of his rookie season in 2014-15. He takes a lot of penalties and quite often they’re reckless ones, but he has 33 points (14 G, 19 A) and is a plus-14 in 55 games this season.

Like NcNeill, Hartman has a shot at some kind of role next year in Chicago depending on how the cap chips fall. Time will tell if they become regulars or not. It’s been a mixed bag for the Hawks top picks of recent vintage:

2012-Teuvo Teravainen has a pretty decent future with Chicago.

2010-Kevin Hayes never so much as laced up a skate for the organization. He has (I’m choking back a little bile here) been productive as a New York Ranger.

2009-Dylan Olsen-Struggled in Rockford for parts of three seasons after leaving college halfway through his sophomore season at Minnesota-Duluth. Is currently struggling for the Florida Panthers.

2008-Kyle Beach is only the second Blackhawks first rounder in the last 30 years (Eric Lecompte was the other) never to have played in an NHL game. It took me a while to track him down, but after starting the season in Austria, Beach signed with the ECHL’s Missouri Mavericks. After going scoreless in seven games, he went back to Austria.

I won’t pick at scars and list all the productive players that came before and after Chicago selected Beach with the 11th overall pick. But hey…without Beach, you wouldn’t have Brandon Mashinter (who has 57 more games in the NHL than Beach) to kick around, would you?

Might we see 2014 first-rounder Nick Schmaltz in Rockford before too long? Someone who’s seen him rack up eight goals and 32 helpers for North Dakota this season knows far better than me. I suppose if Schmaltz decides to leave school early he could get a cup of coffee with the IceHogs as soon as this spring.

This Week With The Hogs

Rockford dropped out of first place in the Central Division standings and are now just behind Grand Rapids as of today. The IceHogs host Charlotte on Tuesday night before heading into three games in three days for the first time this season.

A home-and-home with the Chicago Wolves Friday and Saturday will be followed by another game at the BMO with the Checkers Sunday afternoon.