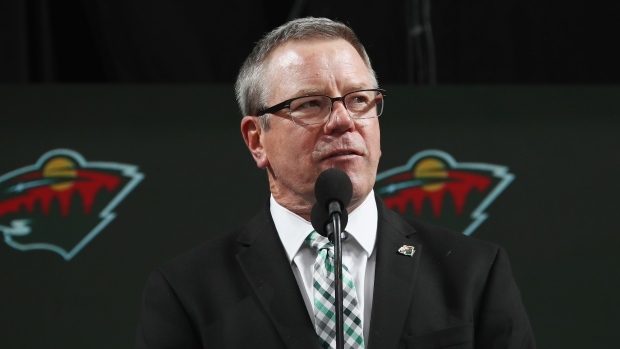 Maybe it took me a week to really come to terms with this breakdown of Paul Fenton’s firing in Minnesota. Maybe I needed a week to remember why I should care about the Minnesota Wild (and I still don’t). Maybe it was just the time of year and things are moving more slowly. But if you haven’t read Michael Russo’s article here, you really should. Just not for the hilarity or schadenfreude of it–and there’s plenty–but then come to realize that it’s probably hardly unique in the NHL.

I can’t decide what my favorite part was. The immediate dismissal of a pretty impressive analytics team that’s so NHL it seems too scripted to work. The never actually scouting Viktor Rask before trading one of your best players for him. The being at the Pats Super Bowl parade mere weeks before the trade deadline while the Wild were self-immolating. The constant fear of leaks. The fascination with players who suck, and have clearly proven they suck.

And it’s easy to point and laugh…but can’t you see some elements happening here? Especially the fascination with certain players, i.e. ones that have played for them before. While I don’t think the Hawks just skip the due diligence part of players they trade for…Kimmo Timonen would like a word. Yeah, that was a long time ago, and recent trades like Caggiula have worked out ok (though they seem to have soured on Perlini pretty quickly, but he was the throw-in in that deal). Still, their fascination with players they already know has a very familiar ring to it.

Also you could probably make a link to the dismissal of analytics here as well, as there’s simply no way the Hawks have paid any attention to it, otherwise you wouldn’t be trading for Olli Maatta.

What’s kind of amazing is how bad Fenton was allowed to be at his job. Can you imagine some of this going on in any other sport? I mean, maybe with the Pirates or Knicks or Raiders or something, but those are known basketcase organizations. The Wild aren’t supposed to be that. They’re not the model franchise or anything–even though they loved to tell people that–but they haven’t been moronic. They just haven’t been all that noticeable. This is noticeable.

And this was hardly Fenton’s first job, and you can easily see where he’ll get another because this is the NHL. No one ever dies in the NHL, they’re just moved to a different office…or wherever Bob Pulford is now.

I suppose the question I have to ask is where was any of this when it was actually going on? I know the answer is that people are way more willing to talk when the dude has already been canned and there’s no fear of repercussions, but surely someone or someones knew about some of this while it was happening. Wouldn’t an outing and reporting of it had a chance of stopping the idiocy to come?

The protection of information is hardly germane to the Wild and Fenton. We see it with every team in hockey, and increasingly sports. These days, when teams have their own bullhorns–website, twitter, instagram, facebook, all with their own staff and writers–there’s little need to get anything to the press unwillingly. You can spin anything how you want before anyone even knows it’s a thing. Still, you have to feel that Fenton’s trip to the Pats’ parade from his job in St. Paul is something that should have been a big deal at the moment. What happened there?

You can’t help but think of the dysfunction in the Hawks’ front office, and yet we’ve had to (get ready Fifth Feather) read tea leaves to even suss that out. It was clear that Q and Stan Bowman couldn’t get along at the end, and were only getting along before because the team in place was winning. But we had to put it all together. Somehow, they were able to keep that all in house, and only after Stan basically admitted to spiking Q with Brandon Manning did we get official confirmation of how deep the dysfunction went. Five or ten years from now, the tell-all book is going to be comedy on a Python-esque level.

We know that the consolidation and shrinking of media is bad in a lot more important areas than sports. We know that everyone having an Insta or Twitter means players or anyone else can talk directly to fans with whatever message they want (that sometimes ends up way worse). We know teams have gotten better and better about keeping everything under wraps, even with all the avenues we have now.

I guess that’s how some of this patently ridiculous shit can go on with a team like the Wild even over as short of a span as a year. But I can’t imagine this level of mismanagement is unique to St. Paul. And you wonder how goons keep getting jobs…