One Day As A Lion 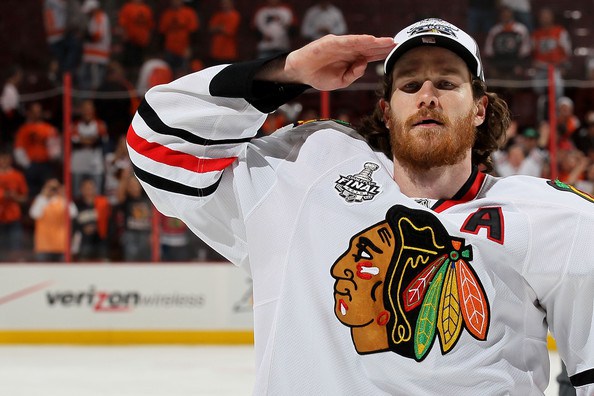 As Sam goes on his Duncan Keith Appreciation Week, I asked him if I could jump in on the fun, because we all need to express more appreciation for Duncan Keith. Sam has already gone through a lot of praise and declarations about Duncs the other day. Everything Sam said was A). correct, and B. awesome (Adam is on many drugs. -ED). Duncan Keith has meant more to this franchise and the decade of success we as fans were able to experience with them than a lot of people realize, and maybe even more than Keith would want credit for. What he has meant to the team is almost difficult to put into words, and yet Sam has done it well time and time again.

I am here to talk about what Duncan Keith means to me, which is just as sappy and emotional as it sounds.

Unlike most of the others around these parts, I did not grow up with the Blackhawks. I was born in 1994 (please don’t yell at me for bringing that up), so I grew up in Dollar Bill era of Blackhawks history. They were never on TV. The most exposure I got to the Hawks as a kid was using them in NHL 2K4 on my PlayStation 2. To give you an idea of how little that meant, Tuomo Ruutu was one of the best players on the team in that game, and he was a rookie. It had Eric Daze listed as the captain, and when I learned later that he was never the captain of the team I felt betrayed.

So when the Hawks went to the Western Conference Final in 2009, that was the first real exposure I got to the team. I had watched hockey sparingly prior to that, usually just the Stanley Cup Final, so I didn’t know who Patrick Kane or Jonathan Toews were; all I knew was what some of my friends were telling me – these guys are the truth and the future. The first Hawks game I ever watched all the way through was the clinching game against Vancouver that year, and then a few of the WCF games against Detroit. The only names I really recognized on the TV were from the Wings.

But my interest was piqued, so I started watching the Hawks regularly in the 2009-10 season. That season was also the first time we saw the full beauty and ascension of Duncan Keith. He was brilliant throughout the whole season and finished second on the team in points with 69 (NICE) in 76 games, which from the blue was a point total at the time that was seemingly reserved for Nick Lidstrom. He was the best player on the team in that playoff run – despite Toews’ team-record breaking production that ended up winning him the Smythe that Keith deserved – and the best defenseman in the NHL, and deservedly won the Norris Trophy over Lidstrom.

I played sports my whole life, and I was always more of a defensive player regardless of the sport. I was a shortstop and catcher, drawn to the positions because of how important they were to the defensive side of baseball. My 8th grade basketball coach always made me the primary defender on presses. I only played football one year, but I was a cornerback. Defense was my thing. So it was easy to be drawn to Keith, who was playing defense better than anyone else at the time.

I was a sophomore in high school (again, please don’t kill me for saying that) when the Blackhawks won that 2010 Cup, still young enough to play backyard sports with friends and at least pretend you were one of the players from your favorite team. A bunch of my buddies took to hockey because the Hawks were the talk of the town, and we had a whole ring of street hockey players (this is your only chance to make Jeffler jokes at me). I was a righty, but I still always imagined myself as Duncan Keith.

The next two years of Blackhawks hockey were not the best, as they bowed out of the playoffs in the first round in back-to-back years, but as I was finishing high school, the Hawks were one of my only reliable escapes from the typical bullshit of being a teenager, and Duncan Keith was the steadiest presence through all of it. He only missed eight games through those two years. And despite his best efforts, he wasn’t quite his dominant self.

Skip to me starting in college. There was no hockey for my first semester in 2012, which was probably a blessing, but once the lockout ended and we had that shortened 2013 season, what we got to experience was the most dominant three years of hockey Hawks fans had known to that point, and quite possibly will ever know. My memory of specific moments is sincerely awful, but there was never any secret that Duncan Keith was always the straw stirring the Hawks drink in that run, and as I was growing the most I ever had as a person, the Hawks were doing the most they ever had as a franchise because of him.

And let me tell you a bit more about this play that Sam talked about earlier today. I have to tell you guys, when Duncan Keith scored that goal, I almost jumped through the ceiling, and then had to keep myself from crying like a baby.

I had nearly died about three months earlier, after falling through a glass table in a truly exquisite show of idiocy – there wasn’t even alcohol involved in the incident, if you can believe it. My lung was punctured and collapsed, and over the next month (between March and April of 2015) I spent a total of 11 days in the hospital over different spans and ended up needing a surgery called a Thorocotomy which involved, as the surgeon described it, peeling scar tissue off my lungs like an orange peel.

I missed the rest of my college semester and was unable to do a lot of things I normally would’ve been able to do. The only normal thing in my life over those few months was the Blackhawks, and thus Duncan Keith being dominant. That playoff run kept me from falling into a dark place. Duncs’ goal in Game 6 let me release months of frustration and pain. Sports matter, guys.

I didn’t grow up with the Blackhawks through my youth, but I did grow up as a man with them, and I almost mean that literally because they were growing up as a team as I was growing up as a person. And as much as it must’ve been so beautiful for people like Sam, Matt, Slak, and others to get to watch it all happen as adults after slogging through the bullshit years, being able to grow up with this team was special. And Duncan Keith was a huge part of that for me.

So Duncs, even though you will probably never see this, ahead of your 1000th game, I wanted to write this and thank you. I might not be who I am today without you.