Once Again, Fall On Your Sword, Ajax 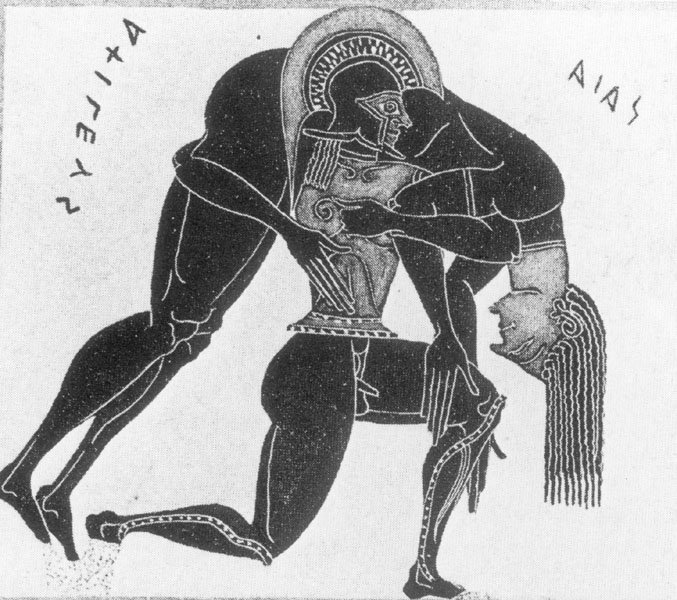 It’s the same call I made in October. I return to you, players, to do so once again.

I ask this of you not because I’m not sympathetic to your cause. From the word go I have found what the owners are doing to you disgusting, obstinate, and absurd. The thought of Gary Bettman smiling, having a cigar and a brandy while slapping the back of Jeremy Jacobs and Murray Edwards over a job well done makes me want to vomit up lunch from two days ago, then eat it up just so I can vomit it up again. I know it makes you feel that way.

But sometimes doing the honorable thing is one that is odorous to every sense. And this is starting to feel like one of those times.

Because what are you really trying to save any more? You’re already at contract limits. You say eight, they say 5/7. Even if you didn’t want to re-sign with your team, you could still get seven in a sign-and-trade (which owners should be embracing because now there’s even less risk of losing assets without any return).

And how many of you really want a lifetime deal? If you’re so committed to your team, you’ll sign another contract. Those of you coming out of your entry-level deals who have earned a big contract? Why would you give up the chance to sign an even bigger one when you’re in the prime of your career at 27 or 28? You don’t know what the market will look like then. You might not want to be left out.

And those of you older, signing the long UFA contracts? What if your team goes in the shitter in year four of your nine-year deal? What if you’re staring at a Cup-less future and you’re locked in, and then suddenly you become the subject of a media circus when your team wants to punt you. Is it worth all that? Isn’t that the same as being a free agent, with even less control?

The length of the CBA? Face it, you owe us at least eight years. And in that time both leaderships could have changed, things could have improved like they did last time and you might not even want out of it. If not for us, your sponsors who help pay your check want to see a long-term agreement. Think of your wallets. You are pretty good at that.

The 5% variance? It’s almost a non-issue with the contract limits. I know, logically if you had this, you wouldn’t need a length-limit on contracts. But logic skipped town long ago, waving its middle finger out the window.

Because, and you might not actually know this, the owners would be just fine without a season or a collapsing league. Sure, they might not like it, but almost all of them have other, profitable businesses. Which is how they got in position to be your owner anyway. The Wirtzes would probably do all right with just their liquor distributorship and realty group, for instance.

But you can’t. If you hold out, if you lose another season, if you irrevocably damage this league and send it on its way into the abyss, you will have nowhere to go. Every facet of the life you love now will be affected. And how many of you have a strong education or background to fall on? Where will you go? For most of you, this is all you’ve ever known.

If you are really willing to go to the wall, you better be willing to do it all the way. Don’t make us miss yet another hockey season so you could get one year added to your contract limit. If you really want to fight this to the end and beyond into the unknown, then you better be ready to blow the whole system up. I think the rebel part in all of us, no matter how small, would at least appreciate that. But it feels like if you were going to do that, you already would have. You may have missed that window.

And will the world end if you signed that deal before you right now? No, it wouldn’t. No matter how bitter you would be when you did it, would you be in six weeks? In six weeks, when you’ve just rolled up a 5-1 win over Columbus or Nashville or whoever, and you’re out celebrating with your teammates at Stanley’s or Houndstooth or whatever other obnoxious bar you like to go to (if you live in a different city I’m sure you have a list of names of terrible bars you know your NHL players go to),  all your drinks are comped and you’re the center of attention from everyone. All the guys are just trying to get close to you simply to say they did and all the girls are waiting to suck you off in an alley on a cold winter’s night simply because you asked them to. Are you going to remember why you were so angry now? Will you even remember that you were?

I know, it’s not fair. So maybe there’s something you can get out of this. You say that limits on length and variance in salary will squeeze the middle class. Could be right, though you could get familiar with the concept of “hometown discount” to combat that. But let’s say you come to the owners’ numbers, but with NBA-like exceptions. “Yeah, we’ll take 5/7 year limits with 5% variance, but we want Larry Bird, veteran, and mid-level exceptions.” In other words, stars could lessen their cap-hit to make room, each team could have one contract to a veteran of certain standards that didn’t count against the cap, and one $2 million slot that can go to anyone. Sure, you won’t get all of them. But if you couch it as making it easier for teams to be kept together and win instead of just trying to squeeze every dollar for yourselves, you’ll find sympathetic voices on the other side. Because the owners want to win on the ice as well.

It would suck, it would seem to be a waste of all you fought for, you’d have to hold your breath to do it. But you have so much more to lose if you don’t. And you’ll always know that you saved the league, and I bet within minutes of doing so, you’ll feel better.

We certainly will. And in the end, we’re the ones who matter. Because I’ll still be a fan after you blow your knee out or are camped in a dark room for months and are out of the league. My dollars last longer than your career.  You want to risk losing even more of them forever?