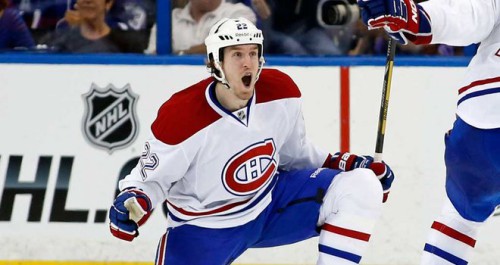 After the acquisition of Andrew Ladd, I figured the Hawks didn’t have room for much else. Shows what my math skills are. That’s why I work here and not there, right? Yeah, that’s it. Stan followed that up yesterday with the acquisition of Christian Ehrhoff which McClure already walked you through. Then last night Stan really pushed the chips into the middle  by saving Dale Weise and Tomas Fleischmann from the great sinking ship known as the Montreal Canadiens for the not insignificant price of Phillip Danault and a 2nd round pick in 2018 (because the Hawks aren’t going to give up any pick in 2017 when they host the draft that they don’t have to, which is a bit weird).

Essentially, Stan looked at his forward depth, and conclude he needed a whole new line. Which he did. And he got one.

Weise is going to generate a fair amount of debate. While he can be completely unhinged at times, he is a plus skater with skill, as his 14 goals on the season this year indicate. He’s toned down a lot of the bullshit in his game, as he only has 22 PIMs on the year. He certainly brings a physical element to the Hawks when that’s required. He’s basically Andrew Shaw if Andrew Shaw had a bad childhood. His peripherals aren’t impressive, but have improved every year in Montreal and he was basically right on their team possession rate for the season (which is still very good if you can believe it). The inflated goal total doesn’t appear to be from a spike in shooting percentage though probably partially drawn from a massive cushioning of his zone starts. He’s spent most of the season playing with Fleischmann and David Desharnais, who flat out blows. So wherever he ends up, either on Teuvo’s or Kruger’s wing, it’s probably going to be an improvement. His numbers could just be the result of hitting his peak at age 27, which is where that tends to happen.

Fleischmann might be beyond his usefulness, but I’m not convinced. He didn’t make much of a splash in Anaheim last year, and was discarded to the pressbox during their playoff run more often than he wasn’t. He’s chipped in 10 goals this season on the Habs’ bottom six, and he certainly can provide that if he has anything left for the Hawks who would encourage that sort of thing. This is a player who put up 35 points in the 48-game season of 2013, so in some ways he’s in the same mold as Ehrhoff. A talented player the Hawks are trying to harvest some of the last dash they have.

In the span of slightly more than 24 hours the Hawks went from basically having a bottom six that was Teuvo and trash to the deepest corps of forwards in the West, and possibly NHL. When this all shakes out I suspect we’ll see a reunification of Desjardins-Kruger-Shaw because Kruger isn’t going to have any time to learn new linemates when the playoffs start, leaving Weise-Teuvo-Fleischmann/Panik. Fleischmann and Teuvo together could be pretty fun to watch, with Weise clearing space on the wall and in front. Perhaps the most exciting thing about all of this is the Hawks have dropped whatever opposition they made up in their heads and have decided Teuvo is in fact a center and they’re going to give him every opportunity to shine there.

It’s not completely shorn up if Ehrhoff can’t turn things around on a second pairing, and Q has him skating on a fourth pairing in practice today so it may be a bit before he even gets a chance to try. If that is still a problem though, it’s still hard to see a team in the West that can do anything about it. The difference in goaltending between the Hawks and Stars is such a chasm that I can’t see anyway Dallas can overcome it. The Kings lack the depth the Hawks now have. The Blues… well, do I even have to say it? I suppose if I squint and John Gibson can play as well as he has this year in May, the Ducks would be the biggest issue. But not if Getzlaf is still on the Seabrook-training plan.

As for what the Hawks gave up… well the future is uncertain and the end is always near. Of all the products of the system that the Hawks have given up in the past two or three years (I’m not including Saad as a prospect here), Danault is probably going to be the most useful NHL-er. I see Cody Eakin in training wheels. But with Teuvo finally being moved to the middle, and there simply being no way that the Hawks would favor Danault over Kruger (and they might already have some sort of verbal agreement with Kruger) even though I think Danault could do Kruger’s job in time for cheaper, there just isn’t a spot for Danault, He would be wasted on a wing.

As for the picks… well, like we’ve said they wouldn’t help for two or three or more years after they took place, and by that time the Hawks will have taken their swings already. They’re looking at a chance to bunch 4+ Cups together here, and only a few teams have done that. Namely, the Habs, Islanders, and Oilers and Wings (though the Wings’ fourth came six years after their third but that’s semantics). Stan has clearly decided the opportunity to walk with giants outweighs some scorched Earth down the road. And there isn’t anyone who’s going to tell him he’s wrong.