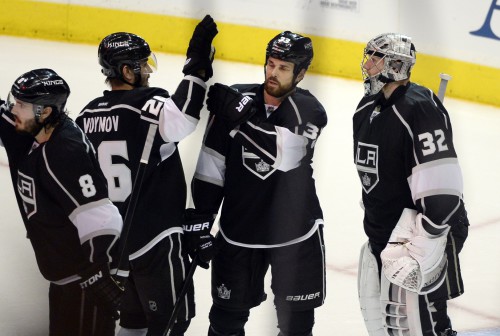 You know what’s weird? This is the first game this series where the Hawks have had the upper hand in possession, in terms of Corsi. You could make an argument that for most of this, they were pretty much where they needed to be. But that was the story when the PK was a sure thing. It most certainly isn’t now. That was the story when the Hawks didn’t make boneheaded mistakes or get bad bounces. They did tonight for sure. It’s why they find themselves trailing this series. It’s also probably why they don’t have any reason to panic. Hockey can be weird. It get weirder when you can’t kill the penalties you take, for whatever reason.

-I guess it’s easy to decide where to start. And that’s not totally fair. I’ve been accused of harping on the same points here, and that’s true. I’ve done it because they were my biggest fear about this team and what I thought might hold them back from a second consecutive parade. But as desperate as I am to not sound like a one-note band (and honestly, I don’t), the numbers can’t be ignored. 30.8%. 30.4%. 29.4%. These are the Corsi percentages for Kane, Sharp and Handzus. Hey, a lot of lines will probably get dusted by That 70’s Line on the Kings. But the Hawks aren’t supposed to be “a lot of lines.” I long ago accepted the Hawks couldn’t have a four line attack. You probably did too. But the least I expected was that the top six would consistently make noise. Half of this top six is getting absolutely crushed.

Is it all on Handzus? No. Sharp hasn’t been very good since getting accidentally clocked by Shaw. But it’s mostly him For the record, tonight saw Handzus unable to beat Matt Fucking Greene to the outside which then resulted in a delay of game penalty. While Oduya should have gotten back to the front of the net for the Kings’ second that flipped the whole game, there’s no question that Zus fell asleep on Carter in front. He then forced Leddy into a 3rd period penalty with a neutral zone turnover. But hey, he won most of his draws?

I feel like this is a bit like World Cup 2010, if you’ll allow me the soccer analogy. Every game Q has to switch Smith to Kane’s center. It’s like Bob Bradley getting credit for his game-changing subs, with everyone ignoring why he has to make them in the first place by getting everything from the start wrong. Hey, you put out that fire really well, but why did you start it?

-Obviously not a night Johnny Oduya will put in the portfolio, as he got caught behind the net for Carter’s goal and then split for Toffoli’s. Though Carter’s was a result of a puck bouncing off the ref, which can be attributed to luck.

-That said, the past two games have seen the Hawks with a chance to really separate themselves from the Kings and they haven’t done it. You can credit Quick, or you can credit it to poor marksmanship, or it could be both. Game 2 saw Seabrook have the 2-on-1 (really just a great save). Tonight both Hossa and Kane had prime chances. You can’t miss these against this Kings team. That may seem harsh, but here we are.

-I guess I make too big of a deal about faceoffs. I tweeted asking if Shaw had won a draw tonight. Turns out he didn’t. He still ended up a plus in possession. But maybe he shouldn’t be playing center then?

-Obviously, it’s the Kings’ second line that the Hawks can’t handle right now. And they’re getting Keith and Seabrook tossed at them mostly, though both their goals came with Hammer and Oduya out against them. I don’t know what to do about this. It’s going to be hard on the road in Game 4. It probably involves constructing an actual checking line with Kruger in the middle. Shaw and Saad? You tell me.

-A lot of anger against Crow tonight. We didn’t get the bounce-back game we were expecting. You’d like him to get Toffoli’s goal, but that still was a breakaway that should have never happened. They let Voynov fire from the Ladies’ tees, Carter was three feet in front, and Oduya blocked out Doughty’s blast. Still, Quick made the saves that have turned these last two games. Crow hasn’t. Pretty simple.

-Pivoting for Game 4, the adjustments that can be made aren’t all that complicated, it’s just up in the air if they’re enough. The Hawks need a second line, which means installing Ben Smith there, or Andrew Shaw. I’d prefer the former. Ok, so what do you do about a 3rd and 4th line? Trickier. Kane needs to play with Toews. If Sharp has as much jump as he did tonight, Hossa-Smith-Sharp shouldn’t get you killed. Shaw-Kruger-Saad sounds pretty good to me. Which leaves putting together a 4th line, which could easily be Morin-Regin-Versteeg/Nordstrom. I don’t know if that’s enough, but I know it’s better than the one line plus one or two players attack you’ve got now. Because what you’re getting out of five minutes of Bollig couldn’t really be more obvious.

Willie Mitchell was the second leading possession player for the Kings tonight, behind Kyle Clifford. Once again, the Hawks are simply not getting at bottom pairs. I don’t know if the layout I just put forth would do so, but I think it might. It’s got enough speed to make Greene and Mitchell and Martinez blink.

Unless Toews is just going to this himself. Which he might.

We’ve been here before. The Hawks looked just about as toast after Game 3 against Boston. They only need one in L.A., and if they get Game 4 they’re in that 2-2 going home spot we know they excel in. They get better as the series goes on. They are the Borg, they adapt. You’re just going to have to tell yourself this a lot on Sunday and Monday afternoon.