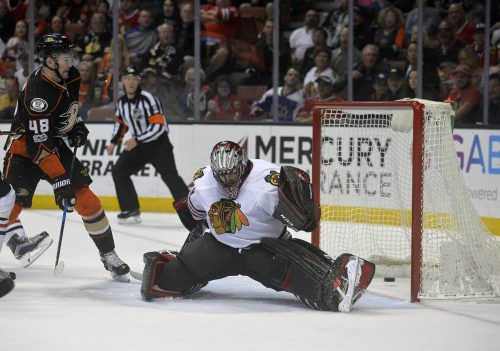 We’re in for another playoff run of Canadian and local media out there salivating over how much Kesler must “want it” while he slashes guys after face-offs, and then as soon as they run into any real team Getzlaf’s tail will go between his legs before rushes off to cash his check that he’s been stealing for years. Perry will stand around in the crease and a couple pucks will bounce off him into the net, and that’ll be it. They’ll once again depend far too much on Rakell and Cogliano to do their scoring, just as it was Beleskey, Maroon, and Cogliano in 2015 when we did this dance the first time.

In the meantime, the Hawks had to deal with far too much horseshit tonight and we can only hope no one was seriously hurt. Once again a Hawk had to pay the price for the Ducks’ need to protect Corey Fucking Perry–who is 6-4 let me remind you–who was probably diving anyway. This time the humanized form of whatever’s stuck in the grease traps needed a rookie in Nick Ritchie to sucker-punch Rozsival (with TOOTLBAN not a foot away, some deterrence). Hartman suffered from a slash from Kevin Bieksa, once again doing an excellent impression of Sean Rodriguez on ice. I look greatly forward to Bieksa once again taking an unfathomably dumb penalty when the Ducks absolutely can’t have it in the coming weeks, just as he’s always done when the chips are truly down.

The Ducks will surely pretend this is some sort of marker, setting them up for an even bigger crash. I’d rather they simply get swept aside by the Flames in Round 1, but if they somehow stick around to watch Toews carve Getzlaf into a puddle of dark meat again while Kesler waves his penis at things that would just settle with me. The only scare with this team is if Gibson or Bernier goes nuclear, a situation Carlyle will assuredly fuck up anyway while he finally tries to learn how to dial a phone.

Fuck the Ducks. Fuck Anaheim, a place that’s basically Charlestown except the mill is an amusement park, but the employees aren’t allowed to live anywhere near it because god forbid the tourists have to see the poors before they go pay 15 bucks for a fucking churro. It looks funny when the Bluths are on your TV screen, but if you ever met a real Lucille Bluth you’d want to perforate her with a cheese grater.

Oh, and now they use a terrible version of Bro Hymn, which is a pretty shitty song by as shitty band, as their goal song. They can’t even be jerkoffs right.