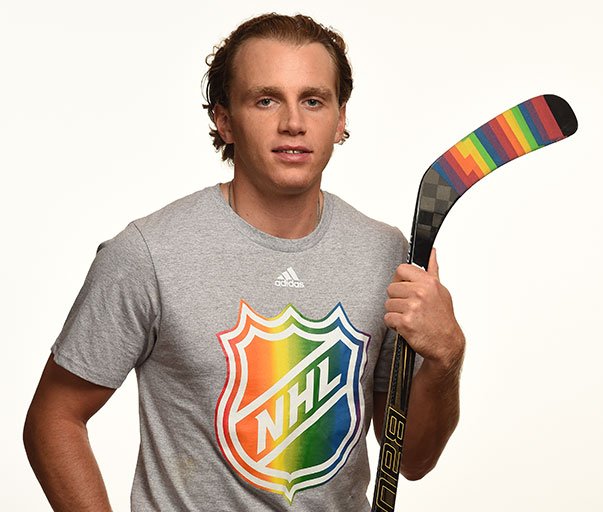 Please, tell me again what a marketing genius John McDonough is and how there should be classes taught at Wharton about his and Rocky Wirtz’s revival of the Hawks. Really, I want you to stuff me full of all your glowing takes and tributes until my eyeballs shoot out of my head like I was a Roger Rabbit character. I don’t even need oxygen anymore, that’s what I need.

We're hosting Hockey Is For Everyone night at the @UnitedCenter tomorrow!

There are 20 other players on this team. And believe it or not, some of them don’t actually cause bile to rise in parts of the fanbase, if not outright rage.

I don’t even know where to start with this. So let’s run through the possibilities of the Blackhawks marketing/social media team had go through their pea-sized brains to put this out. And believe me when I tell you that none of these are going to be encouraging.

One, they think the residue from the Kane ’15 stuff has all blown over, or the Madison escapades, or the hundreds of stories about him from around town that you know if you know exactly one bar employee, past or present. Because two years is so long in the internet age.

Two, they’re still actively trying to rehab his image still, even though the only thing he and the team really have ever apologized for is the negative publicity he has caused.

Three, they have no idea why this would be a problem.

That’s the good stuff there, people. Cut it up and snort it.

I get the Hawks can’t really help it if Chevy wants to use him and Toews in their ads, still trying to cash in on the “kids” angle from 2008 (and I’m sure they have to film these separately because I’ll let you in on a little secret, the two of them don’t really like each other). I suppose it’s not the Hawks problem if the NHL still wants to put this dickwagon front and center of their marketing campaign. But what they do on their social media and their marketing campaigns is certainly their choice. And this is the one they made.

What someone is going to have to explain to the Hawks staff, using very small words I’m sure, is that Kane stands for everything that You Can Play is supposed to be against. It’s not just the player himself of course, but his raft of fanboys and sycophants who rubbed their own shit on their chest before professing their love of Kane and their declaration of hatred or even violence against anyone who just wanted the Hawks and their fans to pause for once second two years ago. That would be the opposite of welcoming. That’s intolerance, it’s hate, it’s lack of understanding or empathy.

This is where I want McDonough to come out and tell me he’s not tone deaf again, because I haven’t had a good, hearty laugh in a while, one that causes my stomach to lock and nearly vomit. I’d be lying if I said, as a Hawks fan mind you, that there isn’t a part of me that doesn’t rejoice that the Hawks haven’t won a playoff round since they completely embarrassed themselves and sickened some fans on that September day in South Bend. And that part of me thinks they probably shouldn’t until Kane retires to whatever Frat House for 45-year-olds exists somewhere and McDonough and Rocky get to be completely exposed for the frauds they most certainly are.

Speaking of which, do the Hawks think they and Kane are 100% insulated from ducking the #MeToo wave? Because I’d be willing to bet that will end in one hell of a surprise, somewhere down the line. And I’d wager as well that one day we’re going to find out the Hawks cut a check or two or 12 or 100 to keep Kane and /or someone else out of the headlines once or twice, given the Mossad they have following around their players at night. And we know about Kane’s “fixer” in Buffalo. Look what happened to Shaun White yesterday. Took all of five minutes for Twitter to be like, “Hey, this guy is a douch-canoe with a settled sexual harassment suit in his past.” Maybe it’s a forlorn hope, but I get through the days knowing that it’s coming for everyone, even if I’m dead when it happens.

What’s so galling is that it’s so simple for the Hawks in cases like this. Fuck, Tommy Wingels helped found You Can Play! He’s sitting right there. Just accept your star winger is a fuckstick, and that you don’t have to put him on the front page of things that are about acceptance, tolerance, and understanding. Or do I have to remind you about the anti-semitic remarks in Madison again?

The Hawks still operate in service, or in fear of, the loudmouth, male portion of their fanbase that, as stated earlier, rubs shit on their chest. That’s the reason they’ve never hinted at changing the logo or the name. That’s why they’d never appear to be gun-shy about Kane. Because they fear the rantings and ravings of that group, even though we all know that’s the group of fans that would never go anywhere and in fact would be first in line to buy the new jerseys should they ever change the log. So does the NHL as a whole. Speaking of which..

Hey @NHL, maybe try not to be a tone deaf mickey mouse ass league by not featuring two players accused of rape in your Valentine's Day ad campaigns you morons. pic.twitter.com/4hsmWFDqAB

Maybe it’s coming for the whole league one day. A boy can dream. Until then I’ll just sift through this waking nightmare.