No Time Left For You: Predators 6, Blackhawks 2; Series tied 1-1 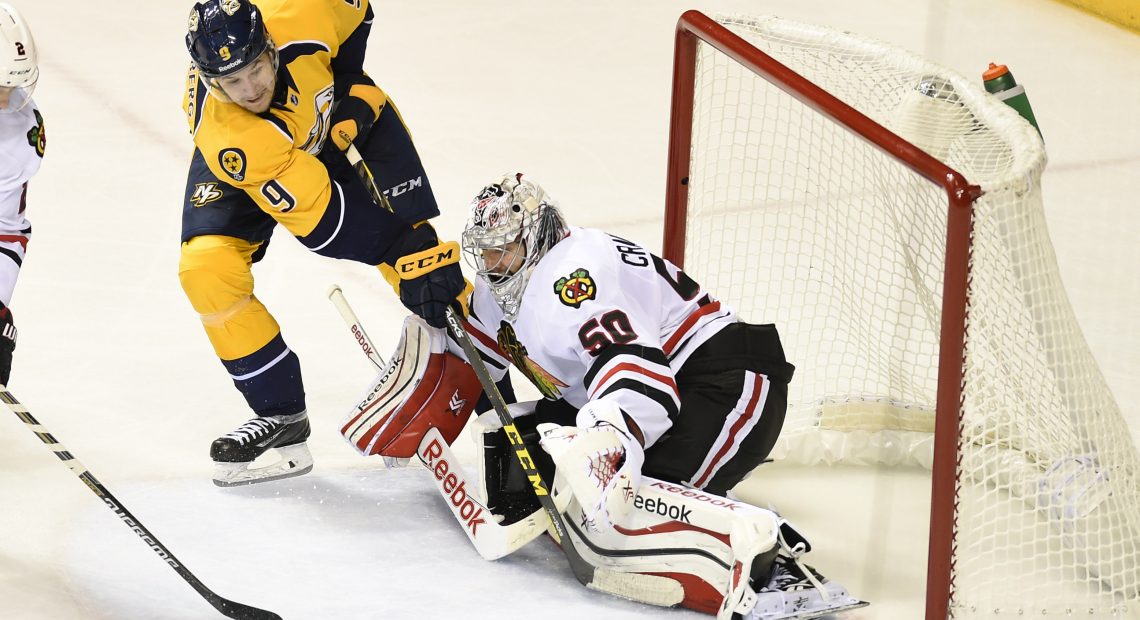 There were a couple times in the 80’s when the Hawks would make it to the Campbell Conference Finals; they’d split the first two games and their win would be a massive blowout. The Vancouver game where Roger Neilson infamously waved his towel on a stick that was later hilariously immortalized in a statue and against Calgary where the Hawks smoked the Flames in the Saddledome and took the series back to Chicago tied at 1.

Both series ended up in the opposition’s favor after 5 games. This really has nothing to do with anything other than to remind everyone that no matter how ugly a playoff loss gets, it ultimately has no bearing on how the rest of the series plays out.

Tonight’s game, whether the game ended 3-2, 6-2 or 1,432-2 still only means the series is tied at 1. I think people need to remember that more than ever. Things are getting weird around here.

–I guess we should broach this whole goalie thing which is taking on levels of stupid that usually are reserved for the gridiron in this city.

First of all, I don’t know when “riding the hot hand” became a goalie that had one really nice game. Let’s remember this: In the final 20 games when Joel Quenneville desperately needed the Hawks to gain points in the standings, he turned to Corey Crawford 17 of those times and only used Scott Darling in back-to-back situations or meaningless games.

This isn’t an ’08-09 situation when he alternated between Nikolai Khabibulin and Cristobal Huet or a ’09-10 situation where he shielded Antii Niemi with favorable starts until he ultimately turned to him. Scott Darling was an absolute afterthought and no one ever said “HEY WHAT ABOUT PLAYING DAT LOCAL GUY WHO SPENT 15 YEARS LIVING IN DA SUBURBS BUT HAS ALSO LIVED JUST AS MUCH TIME OUT OF DA GREAT STATE OF ILLINOIS, MY FRENTS.”

If Corey Crawford has proved anything, it’s that he deserves the benefit of the doubt. We can literally go down the list of times he’s bounced back from stinkbombs if that would make any one feel better.  But I really don’t think this warrants that.

All that being said, knowing how negative the energy might be at the United Center on Sunday with the mob looking to turn on Crawford at the first sign of distress, I can’t really blame Quenneville if he decides to give Darling another shot.

But let’s not kid ourselves if it does go down that route. Darling left a ton of rebounds for Nashville in Game 1 and on their second look at him, you may want to stick the “hot hand” down a garbage disposal. And then what?

–It’s probably another important reminder that tonight’s tilt was a one goal game with 8 minutes left in regulation. This was still right there for the Hawks to push into overtime.

Then, whatever happened. Same stuff as always, actually. Keith overcompensating for Rozsival. Seabrook contemplating the difference between nachos with seitan and nachos with ground beef. We’ve seen this. And then we’ve seen it corrected the next game. Deep breaths, peeps.

–I said a little while ago that the West would come down to luck and health. After two games, the Hawks are up considerably in the health department. Nashville was without Mike Fisher tonight and then later lost Shea Weber to a lower body injury when his ankle/knee got tangled and twisted.

The longer this series goes, the more this will come to the forefront.

–In years past, Joel Quenneville generally coaches a helluva Game 2 and you can really to see his matchups start to take shape. But that’s usually because the Hawks desperately need a win after coughing up Game 1.

This year was different of course as the Hawks won Game 1, so I’m not sure if Quenneville felt like he could be a little more liberal/experimental in his matchups or maybe the Hawks just didn’t play that well in front of him and it didn’t make a lick of a difference.

I guess we’ll just have to wait and see in Game 3.

One thing they need to find out is who will be the Nashville defensemen to pick on. With Anton Volchenkov likely banished to the pressbox for Cody Franson for the foreseeable future, that seems like the most obvious target. And of course, the whole Shea Weber thing needs to play out too.

This eventually led to Nashville’s third goal as they won the face-off, pinned the Hawks in and scored on a scramble.

Please, for the love of all things holy, change this rule that defies all logic.

–Nothing is fucked here. For God’s sake, get Antoine Vermette in the lineup. Let him start taking face-offs and start to flip the script on these lopsided stats.

Get Duncan Keith a partner he doesn’t have to babysit. Figure out which Nashville lines the Hawks can tear apart offensively with the last change and stop with the silly penalties.

These are all easy fixes. Get to it.