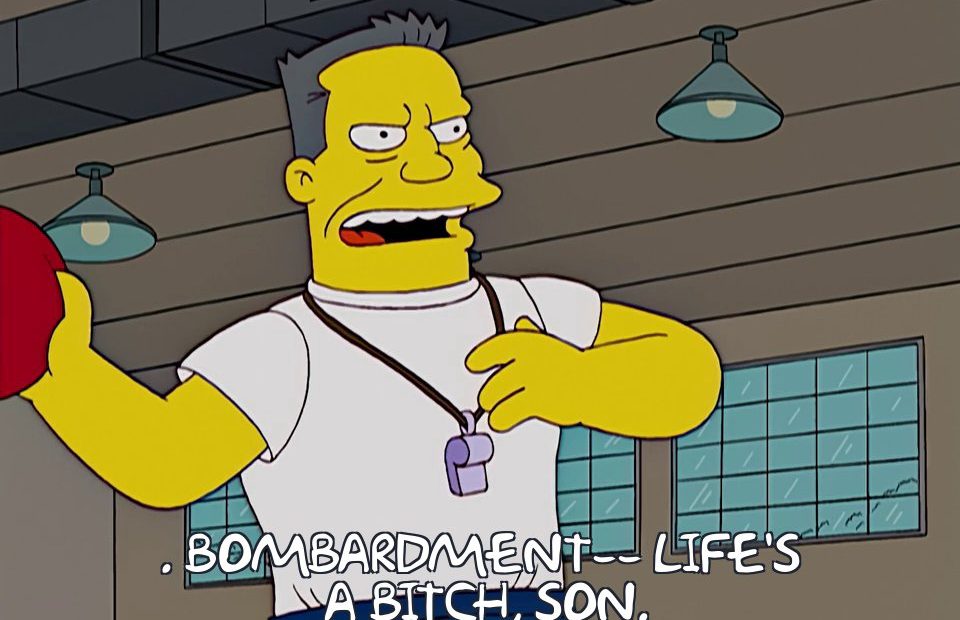 Y’know, I didn’t think I’d enjoy the Knights playoff run, however long it went. But I gotta admit I was all in on their WWE intros for Games 1 and 2, because VEGAS. And as the Kings have descended deeper and deeper into being boring, stupid, and ugly, I’m all for Vegas ridding us of their presence as quickly as possible.

Elsewhere, the Caps refuse to learn the same lesson over and over and the Flyers are cute. Let’s spin this right round, baby.

Well it’s nice that the Flyera and Brian Elliot gave it a shot in Game 2, but I think they should probably get used to this. And frankly this is the normal state of Cold Ones. They get a playoff flameout from their goalie, we spend all summer listening to the drama of how they’re going to solve it this time, and then it happens all over again the next season. We’ve been doing this most of our lives, pretty much since Hextall retired. This time the rumors will be Holtby or Grubauer, or maybe Reimer out of Florida, or something equally as silly. Anyway, the Flyers blue line isn’t very good and is getting exposed. That’s really what matters here.

As much as some series look like mismatches, a sweep is a rare thing. Even when the Hawks were actually good for so long, they only did it twice and were only swept once (as we all know). That’s out of nine years. So with the Jets travel problems–and yes the temptation is to say these are professional athletes and flying in on the day of game shouldn’t be a problem especially when it’s only like an hour flight but think about how you feel after flying–it’s not surprising the Wild were able to come up with one inspired effort in this series. They’re still utterly fucked and really need to get out of the way to get to the series we all want to watch.

This was a weird one. John Tortorella did not deserve that win because of the shell the Jackets went into in the 3rd and OT. The Jackets have easily chased down the Capitals when behind, and the best plan against them is to keep doing that. Sure, it’s easy to back up when you have Bobrovsky behind it all, but you can’t expect him to make 60 saves every time. The Caps are hardly a great defensive team, and were having goalie issues. What happened to the “Safe is Death” guy? The Caps really should be up 2-0 this series.

But they’re not, and it’s partly because they employ the league’s biggest moron. Who was a 1st round pick, by the way. Twice this series Tom Wilson has picked up an unconscionably dumb penalty that the Jackets have scored a tying goal on, and yet they still toss him out there regularly and/or he won’t change his ways. He should have been stapled to the bench after yesterday’s. And really the Caps ran around most of the game like that, and still had the game in the palm of their hands. I gotta say the highlight was in OT when Kuznetsov was set up in the slot by Ovechkin and he decided to try and set up Wilson instead. That’s the mark of a team that doesn’t want to take responsibility. And yet the Caps could easily take the next two in Ohio because the Jackets haven’t really done anything except accept what’s been handed to them. This isn’t over yet.

This series has been unwatchable. And it got more so last night when it became clear the Kings have run out of answers or ideas, and hence tried to goon the Knights out of the building with a bunch of bullshit before and after whistles. As you can see, it worked a treat. The Kings still can’t score, are barely trying to score, and deserve to be with their ass in the dirt as they are. The Knights kept their head down, didn’t fall for any of it, and then undressed Oscar Fantenburg for their winner. Drew Doughty also got lost for their third goal, which is wonderful. The Kings have been boring, unimaginative, and frankly a pox on the playoffs and I’ll be glad when they’re gone. Oh, and then there’s shit like this from their feed:

Get out of my life.