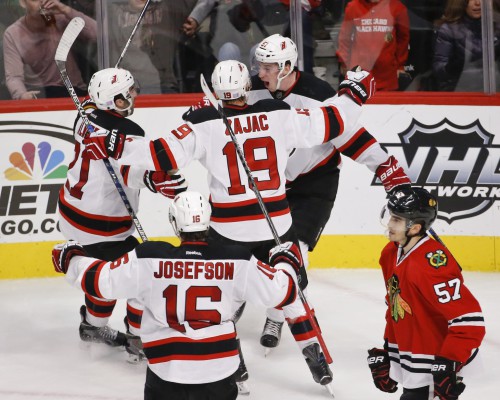 Well, at least they don’t play the Devils again. And at this pace they won’t have to worry about a Final rematch.

The Hawks tried something new against New Jersey this time, taking a lead and hoping that would force the Devils to be a little looser in their structure. But it was the Hawks who ended up employing that, with a couple defensive gaffes, some less than stellar goalie play, and a poorly timed penalty all adding up to a loss. Combine that in with the Hawks barely looking threatening after the first 20 as the Devils were once again able to basically put sand on their flame, and especially when they got a lead. Capped off by no line other than Kane and The Sons Of Rasputin able to get on the scoresheet, and the Hawks are dancing with .500 again by the pale moonlight.

We’ve been over and over the problems with the defense, and Viktor Svedberg certainly didn’t cover himself in glory at any point tonight and I wouldn’t be surprised if they punted him back to Rockford before he had a chance to shower. But that isn’t the sole explanation for the Hawks basically getting nothing from their other three lines.

Then again, we’ve been over those problems too. If it’s my job to point out the emperor has no clothes, I’ll do it. This was the second straight game Jonathan Toews had one shot. He only had one attempt at even-strength. This sounds a little worse than it is, because he only averaged slightly over two attempts last season. He has four points at 5-on-5 this season. That just isn’t going to cut it for a player who averaged 2 points at evens per 60 and is now at one.

Looking over his career, before last year Toews consistently managed three attempts per game at evens. Last year it dipped when he was taking on the other teams’ best every night consistently. Maybe this was a little more predictable than we thought? He’s either hurt, or really pacing himself, but Toews carrying a season long possession rate of just 50.6% signals something is off, when he’s accustomed to being one of the more dominant possession players in the league.

Then again, maybe Andrew Shaw just kills everything he touches.

As for the third line, it’s been in flux all season and as McClure mentioned in the preview, there just isn’t a good reason to not see what Teuvo can do at center there for like 20 games. Because really, what’s Tanner Kero going to max out as? It’s not like they’re getting anything from that line as it is so I don’t know what they have to lose. And we certainly haven’t seen enough of Teuvo at center to completely write off the idea. We’ve seen enough of Kero to know that there’s a definite ceiling that you probably don’t need a ladder to touch.

As for the fourth line, I don’t think it’s any more than the task they’ve been assigned for years catching up. They get horrific zone starts and competition, and to ask the grunts to flip the ice consistently… well, we’ve been spoiled by Kruger’s brilliance in that but it wasn’t going to last forever and could come back.

But there is nothing I can say here that you haven’t thought before. Let’s get to it:

-It’s a shame to waste that Panarin goal as well. I’ve gone on and on about his release, but it was on full display there. Schneider actually had gotten over to that post and there was only about a foot of room above his shoulder, and Panarin found it before anyone could blink. The kid’s skill is there for all to see, which leads to the question why the Hawks were allowed to be the ones to find it. We all should be glad they were.

-I’m glad I set the bar so low for Brandon Mashinter that he couldn’t possibly disappoint. I wish I could be in the coach/GM meeting where they say, “You know what this team is missing? Five minutes a night of a human beer fart sloshing around the ice. That’ll crack the code!” I can only assume he was called up as a message to someone either here or in Rockford that the Hawks will try anyone who spasms competence for a week in the AHL.

-I thought Gustafsson had his best game, finding a couple nifty passes in his own zone to help the Hawks break out. Trevor Daley’s pass in the 3rd that nearly caught the Hawks with nine guys on the ice sums up his season pretty nicely.

-There was a moment in the 1st where Dano caused a turnover on the right boards, looked up and saw Shaw cocked for a one-timer, and completely ignored him to hit the point-man on the other side. This kid clearly has a big future.

-Crow probably wants this one back. Henrique’s goal was a hell of a shot and Hammer and TVR backed off of him far too much, but you have to have that. I’ll give him a break on the 2-on-1 that Palmieri got that was inspired by by Svedberg in the Chris Conte trail position from the opposite blue line. But he’s got to suck up that puck on the 3rd period power play. I know everyone was bitching about Kalinin being all alone, but that’s how the Hawks do it. They want a shot coming from that angle with clear sight for Crow and he’s supposed to suck it up. He didn’t, and there you go.