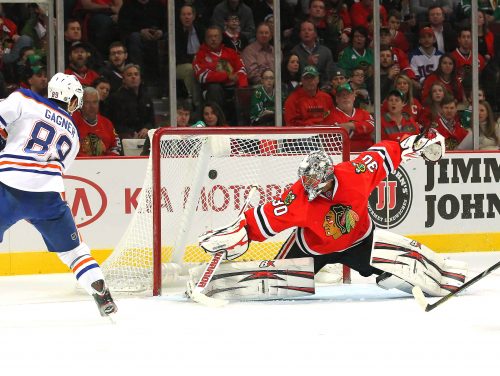 We’ve reached the Space Madness portion of the offseason, so you’ll have to excuse us if the posts get even more sparse around here. We’re all waiting for the Hawks to sign some forward still sitting on the shelves, and they’re probably waiting until the 15th when Jimmy Vesey goes free agent and see if they can get him. While I’m not sold, he probably comes cheaper than those who are still waiting and could be effective. I’m sorry if we won’t be doing posts about whatever Hawk put his fucking house up for sale. Because who gives a shit, really?

-One name we’ve been kicking around was Sam Gagner, mostly to bring a little light into the miserable existence of Fifth Feather. Gagner had a terrible year in Philly, which plummeted his value to the point where the Jackets could get him for just north of the minimum at $650K. Gagner’s days as any kind of scorer may be done, but at that bargain basement price, he probably would have been worth a flier. He’s only two years removed from gathering 41 points for the scoring-allergic Coyotes, and will only be 27 when the season starts if you can believe it. Gagner is small and probably the exact type of player Q would hate, and this is shouting at the rain, but I would have rather taken a chance on him on Toews’s left wing than Richard Panik. If Panik ever puts up 40 points… I’ll basically cut myself because the world won’t make any sense any more.

-Former Hawk Antoine Vermette was put on waivers today for the purpose of buying him out. It seemed strange at first, because Vermette was hardly awful in the desert last year and is still not all that old. But looking deeper, the Yotes want to start turning more minutes at center over to Strome and Dvorak. They also have young wingers too, so moving Vermette there doesn’t make much sense. Maybe they can lose the whole contract if someone claims him, or they’ll just add to their dead money pile to get to the floor. Vermette doesn’t make any sense here, where Marcus Kruger is being handed the third center role with his new salary. Vermette should get more money than the Hawks can afford from someone, and the Hawks’ shortages are on the wing.

-The Avs actually did something smart, until they ruin it by trading the player, by signing Tyson Barrie to $5.5m per year for the next four. While the Avs can’t seem to figure this out, he is their best d-man and their only one who can really push the play. I feel like there’s probably a decent, young team to be made out of the Avs roster, and also know that the management there has no hope of bringing it out.