When The Man Comes Around: Blackhawks 4, Predators 4 (Blackhawks win Catchphrase 1-0) 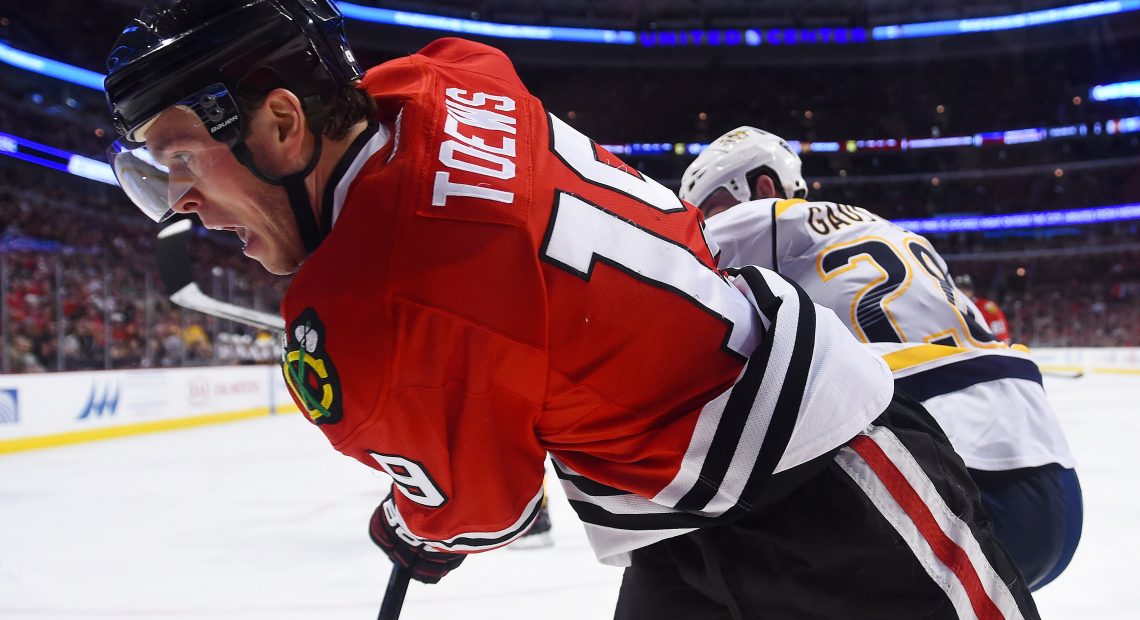 Despite this being the final meeting of the season between the Hawks and Predators, I find it highly unlikely this is the last time we see these two teams play each other. Just like the previous three meetings, the game was decided on the slimmest of margins. A 3-0 Preds lead became a 3-3 tie, then a 4-3 Preds lead and finally a 4-4 tie. And what happened in between? Well, that’s kind of why you’re here, no?

–It’s kind of jarring to see the Predators be so aggressive on the puck after years of Barry Trotz giving up 40 feet of ice through the defensive zone. These days, Nashville doesn’t give teams much room to breathe when they go back to retrieve the puck. Nashville’s forecheck is incredibly active and, perhaps more importantly, disciplined.

Where the Hawks are used to teams giving them room once they gain possession of the puck, the Predators close the gap in a heartbeat. What ends up happening is it disrupts the Hawks zone exits and creates mayhem once they lose possession of the puck. Plays that stick out, in particular, from tonight’s game were instances where the Hawks defensemen gained possession and went behind the net thinking they’d have time because the Predators were going to peel off for a change.

Instead, NOPE. The Predators were coming after the Hawks full bore.

I think in a playoff series and after seeing it for a few games, it will become second nature and easier for the Hawks to adapt to. However, in the regular season with a different opponent every night and no one really playing a similar style of game, it’s easy to see why Nashville is having so much success this year.

The way the game shook out may have played a pretty big role in that. With the Hawks chasing three goals, Quenneville went to his horses to try and get back in the game. On the flip side, Laviolette was probably more comfortable rolling four lines knowing he had a good chance of at least getting a point once they went up 3-0 with 35 minutes left in the game.

–I’m not sure there are more than a handful of people on the planet that could’ve made the play Andrew Shaw did prior to scoring the Hawks second goal. With no stick and the puck heading his way, Shaw controlled the puck with his feet and in one motion, picked up his stick and then sent a cross-ice pass to Brent Seabrook.

The degree of difficulty on that is off the charts. First of all, controlling the puck with your feet is no easy task. Secondly, picking up your stick off the ice can often make you feel like a penguin trying to pick up a spoon.

For Shaw to be able to do all that with a Predator defenseman hounding him is a mundane sports achievement of the highest order.

–David Rundblad can’t do much in a NHL game but he sure can fire the puck. His point shot set up Bryan Bickell’s game tying goal. Rundblad had a few opportunities in the third with bombs from the point and if he had hit the net, who knows what would’ve happened. I’m not sure this is a compliment but the way his shot sounds and looks when it hits the boards, it reminds me of Dustin Byfuglien’s shot.

–It’s bizarre to see someone in a Predators jersey create their own shot. Paul Kariya was there for two seasons but three people remember that. In Fillip Forsberg, Nashville has a guy that not only opens space but also only needs a sliver of a second to get his shot off. Between him and Colin Wilson, they will be a frightening duo for the Preds this summer and years to come.

–This was the last one until the Winter Classic. For the Hawks to nab two points out of this, especially after the way it started, was huge in the race for the division (if that sort of thing is important to you). We’re getting close to that point of the season where the Hawks start to hit their lull. You’ve been warned.