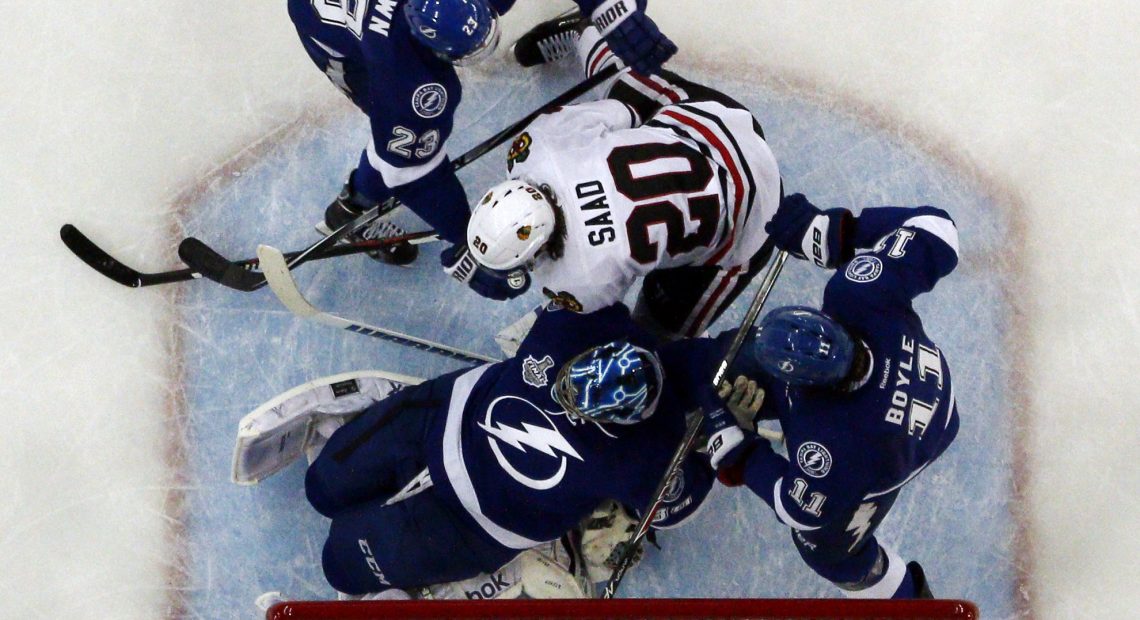 That’s probably more what people were expecting at the start of this series, no? For 60 minutes, both teams took turns taking the momentum, trading scoring chances and the lead. In the end, the difference was a deflected point shot on the second consecutive power play with same Blackhawk taking both penalties.

There was also the whole Ben Bishop and Andrei Vasilevskiy taking turns in the third period which was certainly unique.

Really one for the books, Jerry. Let’s get to it.

–So the Tyler Johnson goal shouldn’t happen and Corey Crawford is the first to know that. Crawford has always been wonky with shots originating from the corners and/or weird angles. At the same time, that’s not exactly a goal you can point to and say “See, there’s his weakness now just keep doing that!”

For the goal to happen, it took a board battle won, Oduya being caught slightly flat-footed and Crawford being caught in between whether to poke check Johnson or hug the post.

Then of course, Johnson had to put the shot perfectly under Crawford’s armpit for it to bounce precisely into the net, all from 3 feet away. It’s a goal that happens maybe 1 out of 30 times; it just so happened to come at a really bad time.

That being said, if Tampa prefers to take shots from the corner instead of the slot, I’m sure Corey Crawford and the Hawks would be fine with that. Weakness or not.

–Keeping with the theme of goalies, Ben Bishop left in the third period for some reason. While we all wish for comedic and nickname purposes, it was for diarrhea, it sounds more like he tweaked something that had been ailing him.

That time, with Bishop stretching in the tunnel, Vasilevskiy stuck around long enough to make a save; five of them, in fact, including after Chicago pulled Crawford with about 2 minutes remaining.

Now, the question is whether he’ll get a full game to work. Bishop, jokes aside, was not sick. He tweaked something, and there’s no real way to know what happens over the next 36 hours. It’d all have been so much simpler if he just had diarrhea.

So there you go. What does that mean moving forward?

With Bishop unable to finish the game, it’s safe to assume this won’t be the last time Vasilevskiy will be heard from so the Hawks will have to get comfortable with shooting on him pretty quick. During the first three games of the Anaheim series, the Hawks did not seem too sure about where to put pucks on Anderson. Patrick Kane said as much after the series as well when he explained how the more looks the Hawks got on him, the easier it was to break through.

Now they’ll probably have to do it again. Let’s just hope it doesn’t take another three games this time.

–I’d really like to believe that Tampa was awarded those two power plays because Ben Bishop put on a tirade that Mike Smith would be proud of after the Seabrook goal. Unfortunately, both of Sharp’s penalties were no-brainers that would’ve been called at any point of the game, overtime included.

That being said, during the last series, Corey Perry (I think…) skated right into Crawford’s glove as he was trying to grab the puck. The puck went in and there was minimal controversy because Crawford just kind of threw his arms up in the air and didn’t skate across the ice to complain to the officials.

Hossa skated with his stick on the ice and made slightly less contact with Bishop and you would’ve thought he two-handed him across the cage while saying that Cardinal fans weren’t the best in baseball.

You knew Tampa was going to get a power play after that; it’s just too bad Patrick Sharp made it so obvious.

–Hey, remember in the 2010 Final when Jonathan Toews and Patrick Kane were held to 0 points and were a -2 in the first two games of the series. Or how about in the 2013 Final where Toews had no points and Kane had one assist through the first three games?

Kane had 8 points to close out the 2010 Final and Toews had 3 assists in the final four games. In 2013, Toews had 5 points over the last three games and Kane had 4 points in the final three. Maybe Cedric Paquette shouldn’t deem himself the Gerald Wilkins of his day quite yet.

The same thing goes for the opposite side with Steven Stamkos. The Hawks have done a good job so far of limiting his chances but there’s going to be a game here where he breaks through. So hold on to your narratives.

–The Lightning opened up their game much more than in Game 1 and the Hawks still matched them blow for blow. In the Nashville series, the Hawks struggled with their speed because of the extra long overtime games and every other game schedule. With an extra day off between Games 1 and 2 and 3 and 4 and no overtime marathons (please no), the Hawks should be in much better shape to handle the Lightning’s speed.

Other things to watch as the series shifts to Chicago will be the matchups that Quenneville chases at home. I’d assume he’ll at least give a look to see if he can get Toews and Kane on the ice together against any Tampa defensemen not named Stralman or Hedman. If they still can’t scratch out anything after a period, then you’ll probably the lines get blended quickly.

Teuvo is pretty much set in stone on the second power play unit.

TVR will most certainly see action and if he gets the 5 minutes Kyle Cumiskey has been getting, it shouldn’t be an international incident.

David Runblad had a few shifts late in the third and with the Hawks chasing a goal, not the worst idea in the world. I still forsee him scoring a goal before this series ends because hockey.