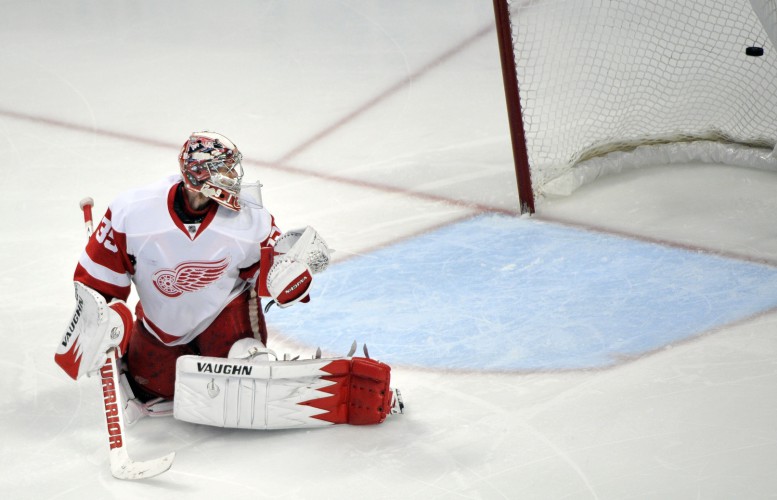 That’s how I’ve felt since it all ended. I’m not sure where my feet are. I only have a loose grasp of where my hands are occupying. I’m sure you get it.

Maybe it’s fitting. Maybe this is how it had to be. To rip the hearts out of your most loathed rival they way they’ve been doing in various fashions for so long I think I just want to hurl and cry at the same time. And I can’t afford to lose that many liquids out of my face. Maybe that’s the ultimate justice.

Does it erase all the scar tissue? No, of course not. Is it pretty fucking sweet that the end of the Hawks-Wings Western Conference rivalry will forever be known on Brent Fucking Seabrook mind-shifting one home? Yeah. Yeah it is. There’s no other way to say it.

Did I think it would happen? No. Once again, I lost faith. But I had good reason. Ask 326 Bureau Chief. Ask others. After the 3rd intermission after the Hawks were simply robbed of the winner, I knew what was coming. It was THE MAKE DETROIT WIN button that’s been in effect for so long. You know it. Bettman hit it whenever he needed it. That’s how it felt. It was scripted. It was over.

-Right, the first bullet. Brent Seabrook? Unquestionably, the worst player on the ice before that winner. He was hesitant, he was careless, and when he wasn’t either or was both he was slow. So many turnovers. So many bad decisions. And yet, when it came time to say, “Fuck it, I’m going for it,” there he was. I can’t tell you what it means. Who could know?

-Kronwall’s gap on the OT winner was terrible, and quite possibly the first mistake he’s made all series.

It’s funny that the NBA and NHL have so many questions to answer about their officiating this year. Because it felt like the ref knew he had to call something there, but shit himself at the thought of giving the Hawks a power play with less than two to go. So he came up with that. He was saved a firing by having the Hawks win it in OT.

-So what was with the complete breakdown in the 3rd? Give up a goal? That sucks, but you recover from that. Or you should. The Hawks didn’t. They couldn’t find a teammate, they couldn’t get out of the zone, they couldn’t maintain position. Makes you think they got out of jail tonight. That’s not what champions do. And they better find a whole new reserve before Saturday, because winning game 2-1 and 1-0 are going to come up again very shortly.

-Nice of Dave Bolland to show up just in time. This series was decided on the one moment the Hawks bottom six decided that it could muscle up to the Wings’. Better late than never.

-I almost feel worst about the canceled out winner because it was a play that Saad made, and he really had himself a good game in limited minutes tonight. Just as he did in Game 6.

-Kane did most of what we asked, and got more engaged tonight.

-Viktor Stalberg had six shots in 10 minutes. When did Gorilla Salad have that many minutes or that many shots ever?

-Corey Crawford gets a Game 7 win for the first time. Did it always look smooth? God no. But it doesn’t have to as long as you keep the puck out.

– I thought Andrew Shaw was a beast tonight, but maybe I saw that wrong.

That’s enough. We get a night to enjoy this. The dragon of the past has finally been slain, after far too long and far too much effort. We know how it feels now, and it’s pretty awesome.

But the new and improved dragon awaits. And it’s got bigger teeth and sharper claws. And a Jonathan Quick. It’s only halfway done.