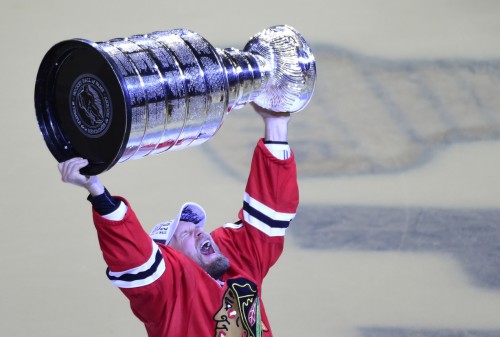 I’m going to eschew the normal wrap here. Because who the fuck would want to read it anyway? If you’re lucky, you get one game per season where the minutiae doesn’t matter at all, only the ending. Around these parts, we’ve gotten three of them. It’s still hard to get my arms around typing that.

In fact, all of last night is hard to get your arms around. Just a surreal day, with the weather playing a huge part in it. I’ve been doing this seven full seasons now, and never in all the games I’ve sold programs before had it rained like that. Sure, it rained hard for 20 minutes at times, or a steady drizzle for an hour. But this was relentless. I was trapped in my car for 15-20 minutes, and when I could finally get out the water in the street was over my ankles. I think my socks still weigh four to five pounds.

As for the game, the atmosphere was definitely charged, but there was almost a feeling of confusion or bewilderment to it. Like most of the 22,000, the ones who knew what was at stake fully, still couldn’t quite believe they were there and it was all happening in front of us. We all yelled and cheered almost out of reflex more than anything.

A cagey 1st period didn’t help. But I don’t know, I’m sure there’s a part of you just like me that was glad it wasn’t a blowout. You had to sweat it until the end, right? The Lightning finally split up Stralman and Hedman, at least for sections of the game, which protected the other nitwits on their blue line a little better. It felt like it had all series, where the Hawks carried a majority of the possession but the Lightning fashioned better chances. The Hawks actually fashioned an effective power play that didn’t score, which is new for them because either they do score or they look helpless. They seemed to want to do both with each of their 1st period power plays last night.

Intermission was filled with kind of the same feeling as pregame, as I ran into regulars or readers or friends, all asking if I thought the Hawks would get it done. As if I knew. I mean I did, but I hadn’t been transported back from the future or anything.

The 2nd, same as the 1st. Back and forth, with the Lightning stepping on the gas more and the Hawks not being able to handle it as well. But surviving, thanks to Crawford, who obviously sucks (he’s got a Cup-clinching shutout on his resume now. Chris Osgood that, motherfuckers).

And then Keith’s goal.

Almost poetic in a way. Play broken up at the blue line, sped ahead to Kane. Watch the replay. When Saad makes his stretch pass to Kane Keith isn’t even in the screen. A couple seconds later there he is taking Kane’s pass. Guess all those hits took their toll, right Kesler? There’s Cedric Pacquette standing still. “Oh nice save Bish…. hey where the fuck you going?”

I spilled half my beer on Killion. He didn’t mind. We also kicked over his. He kinda minded that. That roar. Never heard anything like it… at least for a period.

2nd intermission, and then it starts to get real. Felt like we were all coming to terms with what was in front of us. That clock… it never moved. I don’t know how I kept one eye on the clock and one on the ice and never missed anything on either.

Saad dropping to Richards. It went into slow motion from there. Richards just calmly moving in. Moving in. Shoot asshole! And then to Kane who I never thought he saw. That’s when our row turned into a mosh pit. Felt like the roof might collapse. I think back on it and all I remember are flashes of images, it was all happening so frantically.

We tried to pretend the last five minutes were stressful. We’re Chicagoans, and we’re just attuned to bad things happening. But we knew from the time Kane dented twine. It was only a matter of time. We counted down the last 10 seconds. Probably should have counted the last 17, just for symmetry. By the time my row, my friends, got untangled from our hugs, there were the Hawks all piled against the end boards. Then over to the Lightning, who must have felt like the loneliest people on Earth at that moment. Kind of a difference from a year ago. Maybe that’s why this one felt the way it did.

We knew from Twitter the Cup was held up en route. No one cared. It was shinier than I remember when it got there. There were tears, won’t lie. Not as many as I feared would come. I don’t know, something rang inside when Kimmo got it. You could feel his catharsis from the 300 level. It was only less than a year ago that he was probably pretty sure he would never play again, and now he goes out on the best of terms. Criticize the move all you want, you’re certainly in the right. But that, watching him retire with his skates on and the Cup overhead, we all understand that I think.

There’ll be a lot to talk about this summer. Starts pretty soon with the draft. But there’s time for that. Not today.

Are we putting out t-shirts like last time? Working on it now, in fact. Will there be a commemorative issue of The Indian? Of course, but I’m not even going to think about it until next week. Today is about holding onto last night. Let’s all do that.