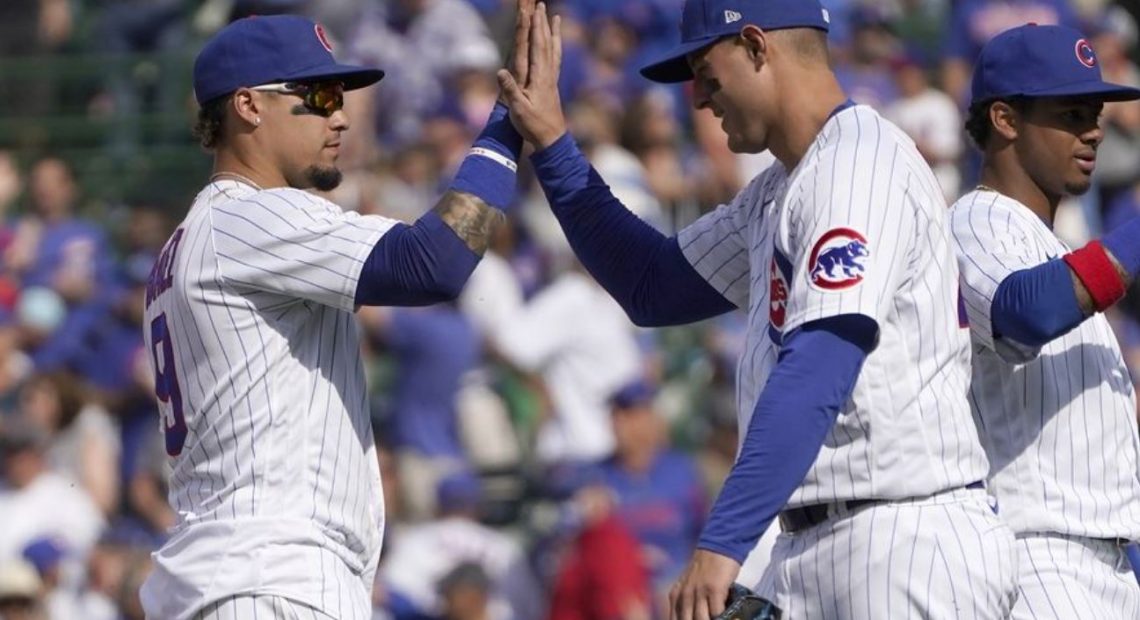 Yes, the Padres are even more injured than the Cubs are. And they were without Fernando Tatis Jr. in the lineup today. But don’t allow those factors to demolish the good times that were had this week at Wrigley as the Cubs were able to sweep their series against the 1st-place Padres.

Things were looking just fine for the Cubs after the first game, stomping the Padres with half an infield of “who?”s, but that’s just who the Cubs have been for most of the season. Then Anthony Rizzo came back for games two and three, collecting himself five hits and two RBIs on his time out. His .832 OPS at the end of game three was second on the team only to Patrick Wisdom, who has a ridiculous 1.458 OPS after hitting three home runs this series. Who the hell is this guy? More please?

Fielding errors and home runs galore made this series an exciting one to the very end as a Cubs fan, and it came without having to watch Yu Darvish pitch against us so we don’t have to feel that pain. (I’m sure we’ll see him next week, however.) Let’s break this series down before going on to the next.

This was supposed to be Trevor Williams’s start, until he had to get an appendectomy and got put on the 10-day IL because that’s how this season has been going for the Cubs so far. Instead, they put Kohl Stewart to the fire, who has only 17 big-league outings to his name, with the last one being in 2019.

However, Stewart and the Cubs held things together against the Padres. Stewart pitched five innings and allowed only three hits and one run. He walked only one batter and struck out 2 keep his ERA at 0.0. He also had a nasty play to walk off the fourth inning, as the ball was hit right to his glove, which he caught on a bounce with his back turned to the batter and making the throw to Kris Bryant at first base. The other bullpen guys, Andrew Chafin and Tommy Nance, closed down the game completely for the Padres, allowing no hits and striking out three batters between them.

The bullpen was able to keep the Padres’ scoring down, as well. Keegan Thompson continues to impress despite his outing being the statically worst of the bullpen this outing. He allowed three hits and one run but also struck out three batters in 2.1 innings. He allowed Tatis Jr. to homer off of him, but that is forgivable considering how out of this world he plays.

This game was a homer-dependent game, as the Cubs homered five times which allowed them to score all 7 of their runs. Javier Baez homered twice, RBI-ing Kris Bryant in the 3rd inning as well. Patrick Wisdom also looked great offensively, as he hit his 2nd and 3rd homers of the year today while being a competent third baseman during this time of injury. Kris Bryant also had a homer, but considering the MVP numbers he is continually putting up it’s not much of a surprise to anybody.

This game was the only real nail-biter of the series, as Hendricks was able to make it one full rotation before the Padres were able to really start hitting off of him. Wisdom homered in the 2nd inning, scoring Baez, to put the Cubs up in a relatively comfortable 2-0 lead early. Then, on his second round through the rotation, Hendricks started to slide a little, allowing a solo homer from Victor Caratini (making Cubs fans to bitterly remember what a competent backup catcher looks like since at the moment our backup catcher is on the 60-day IL), a single to pitcher Ryan Weathers, and then another two-run homer to put the Dodgers ahead, all in a two-out situation. Manny Machado singled, but after that Hendricks was able to finally get the strikeout he needed to get out of the inning.

Luckily for us, the Cubs answered immediately to this one. Sergio Alcantara, bright-eyed and playing his 13th career MLB game, got on base with a leadoff single. Despite Kyle Hendricks’s best efforts on a bunting attempt, Alcantara was called out at 2nd, meaning Willson Contreras was the leading run when he stepped up to the plate. He crushed the ball to center field for a two-run homer, of course.

Are you bored yet of me telling you the bullpen was fantastic with no issues? There were no hits allowed for any of the three bullpen pitchers, and together they recorded four strikeouts. Three of them came from Craig Kimbrel, who struck out three Padres in a row to end the game. Thanks Kimbrel. Don’t ship him off to another team please.

The Cubs were able to sweep this series in a quite miraculous way, immediately answering back when the Padres took the lead in the 4th inning thanks to a throwing error on the Padres’ part to score Anthony Rizzo and get Rafael Ortega to reach first base. One inning later and Rizzo made his presence known, doubling on a huge, huge hit that scored two runs and put the Cubs up in a much more comfortable 3-1 lead. Rizzo is back and you missed him, but whatever you do, Ricketts family, don’t resign him.

We all thought that 3-1 lead was going to come the inning before in the 4th, after two Padres fielders pulled a Nico Hoerner/Ian Happ-à-la-1-month-ago, colliding trying to catch a fly ball and ending the inning on a double play before both collapsed on the field in pain and were taken out of the ballgame. Probably the worst part of this game to watch by far.

Back to the show: there was still so much to like. Ian Happ’s infield single scored another Cub to make it 4-1, and Javier Baez shortly thereafter hit an absolute bomb to make it 6-1. The people at Wrigley were going absolutely nuts, and that was before a fan hopped onto the field with a Jesus sign, got tackled by security, and Pat Hughes announced that he’d be “going to jail for the night,” though he didn’t seem sure of his prediction by any means.

Adbert Alzolay got the win, allowing the Padres’ only run and three hits, striking out seven batters. And the bullpen was once again absolute nails: they allowed two hits between the four of them, Nance got himself in and out of a pretty sketchy jam in the 7th inning, allowing 0 of 2 Padres in scoring position to score that day. It was exactly the game the Cubs needed to end on before the west coast trip.

Finally, shoutout to Boog Sciambi for singing what was legitimately the worst version of the 7th-inning stretch me or my dad have ever heard.

It’s road trip time, as the Cubs will be spending some time in California to play the Giants, who were on a four-game win streak before they got walloped by the Angels yesterday to the tune of 8-1, and that was without Mike Trout or Shohei Ohtani in the lineup, so yikes.

Despite this, and thanks to the Padres’ collapse this series, the Giants now find it is them at the top of the NL West standings with a 34-21 record. Some wins against the Giants, who are slightly less injured than the Padres right now, are quite necessary. Like Soundgarden (good all the way to the end), the Cubs will have to just keep on rowing through these games, come hell or high water, picking up as many wins as they can in order to stave off the selloff. They’re trying their damndest to do so, and it’s making great baseball. Go Cubs go!