Look Me In the Eye and Tell Me, Are You Satisfied? Game 1: Blackhawks 5, Wild 2 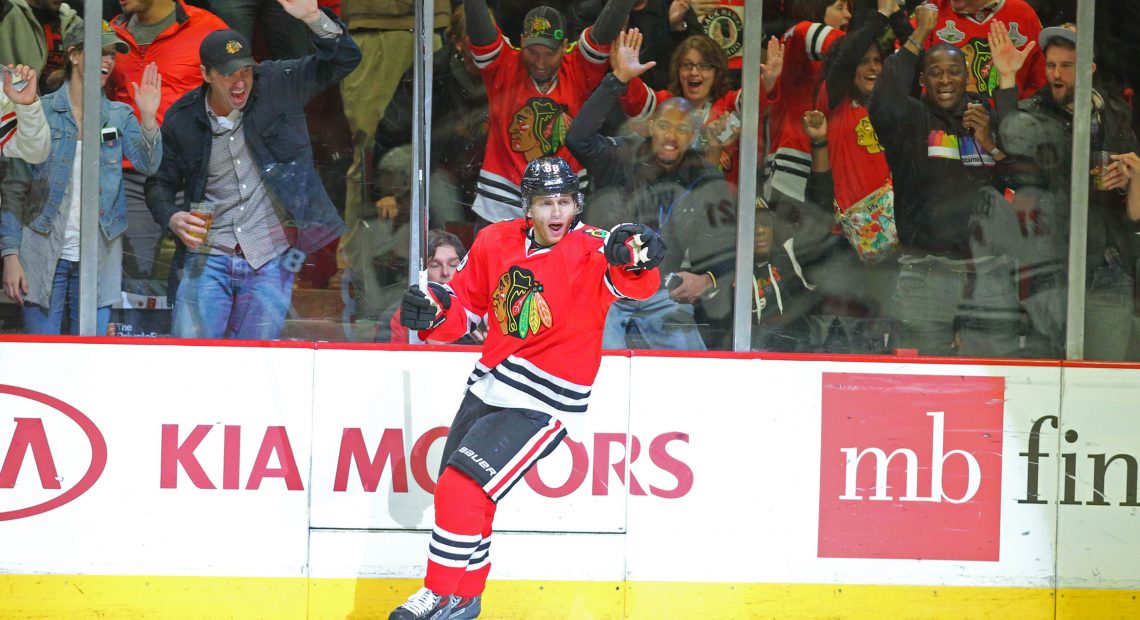 I have no scientific research to back this up, but I don’t recall a team that ever took 6 games to wrap up a series then proceeded to have nearly a week off in the playoffs. But that’s what the Blackhawks were given after their arduous series with the St. Louis Blues. Coming into Friday’s Game 1, the tried and true narrative of Rust vs. Rest was on full display for all to see.

The conclusion drawn: Meh, who knows.

If we learned anything from this one game, it’s that Blackhawks believe they don’t have to red-line their EFFORT-meter to give the Wild all they can handle. Granted, it was Game 1 and the Wild did miss converting on more than a few opportunities. And we were saying all the same things after Game 1 against Detroit last year. But as we have grown accustomed to under this generation of Blackhawks, Game 1 is always a feeling out process.

Thanks to a finally ept (opposite of inept? If this isn’t a word, I’m making it one) power play, the Hawks staked themselves to a 2-0 lead after two periods.

I may have blacked out on Bryan Bickell’s goal, but I swore I saw a right-handed point shot come from the left side of the ice. Of course, this was more by accident than design as Marian Hossa was doing his best Salvidor Dali impression with the puck. Brent Seabrook had no choice but to rotate to that side. The result was an immediate one-timer that Bickell was able to tip before Bryzgalov could get set in his crease.

The Hawks second power play goal was all Brandon Saad. Saad danced through the Wild penalty kill box until 3 of the 4 Wild players were focused on him and then dished a gorgeous cross crease pass to a wide open Marian Hossa. Kudos to Bryan Bickell for being heady enough to lift up his leg to let the pass through. There’s no word if Bickell learned that move from the one of the 1,232 pitbulls he’s rescued.

As it is wont to do in the NHL playoffs, this two goal lead disappeared quite quickly. The Wild responded with two quick goals in the third. Unfortunately for them, they left too much time on the clock for the Hawks and/or Patrick Kane to respond.

You know the rest. On with other interesting factoids:

–Right, that Minnesota Wild second goal. How did it all start? Brandon Bollig thinking he was still the star center for the Affton Americans and he could dance through three players. We’ve been saying since the pre-season really so this is just screaming at a moving train by now but despite the contributions of Bollig, whatever they may be, they certainly aren’t worthy enough to have played in EVERY game this season.

Despite looking woefully out of place against this Wild outfit, there’s no reason to believe that now, coming up on 90 games, Joel Quenneville and his staff have seen enough to launch him permanently into the United Center orbit. I guess we’re just stuck with him and you’ll be stuck with us pointing out every time he makes a critical mistake that ends up back in the Hawks net. Get used to it, Hitler.

–Did anyone really feel that antsy about coughing up a 2-0 lead? I’ll be honest, this felt nothing like when the Hawks surrendered three straight to the Blues in Game 4. That had an honest to goodness feeling of impending doom. This one felt more like, “Oh, there’s still 10 minutes left, the Hawks have a really good chance to lock this down in regulation.”

And then Patrick Kane happened. I’m not sure what was better, the fact that he scored a goal that will be played on the United Center jumbotron from now until the zombies rule or that it happened against the Minnesota Wild top defensive pair in Suter and Brodin.

It seemed like there was a delayed reaction from everyone after Kane scored, like a second or two where everyone in the building and watching on TV thought, “Holy shit, I think I saw Patrick Kane dance through three Minnesota Wild players and then roof a backhand through an impossible angle but that couldn’t have possibly been real.” Oh, it was real.

–Right, about that second period. Credit should be given the Wild for stretching out the Hawks defense in the neutral zone and creating separation between the forwards and the defense. This allowed ample amounts of time for Minnesota to set up shop in the Hawks end and spray off point blank shots before the Hawks had the whole cavalry back.

As Brian Engblom mentioned in the telecast, the Hawks were incredibly slow on their line changes during that frame. I wonder if a lot of that had to do with the Hawks still in the feeling out process of the matchups they wanted and the coaching staff and players unsure of who Minnesota was throwing out on the ice. It would speak a lot to my point above about how the Hawks under Joel Quenneville are notorious for starting out slowly in a playoff series.

This will definitely be something worth watching as the series progresses.

–Jonas Brodin may not play a worse game in this series.

–So Andrew Shaw may miss a few games. His stat line says he’s had 2 goals in the playoffs but I can’t really remember either of them. When I think of his playoffs thus far, I picture a wedding slideshow of Shaw heading to the penalty box with an incredulous look on his face after just wrestling some guy to the ice as the puck is 200 feet away.

Of course, Jeremy Morin is the obvious choice to slot in his place as he can do everything Shaw can and then some besides play center (which Shaw really hasn’t done this playoffs). So naturally, I’m sure we’ll see Kris Versteeg back in the lineup.

–Where the series ultimately goes….in my mind I can see two different paths. Either the Wild continue to biff every opportunity the Hawks give them and it ends in four or the Wild begin to capitalize on some of their golden opportunities and the teams split the first 4 games before the Hawks dispatch them in 6. That seems like enough to hold you all over.