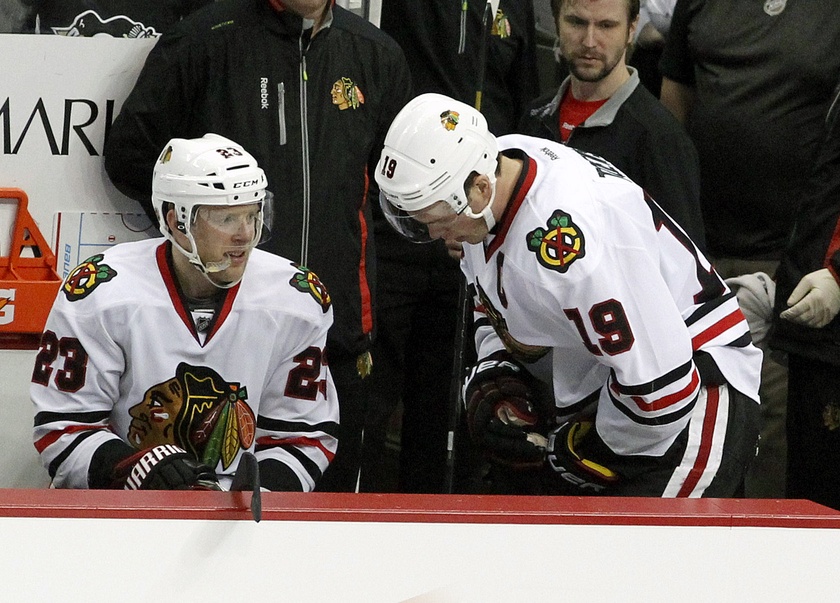 The Blackhawks have already made the postseason – that much we know. They haven’t done themselves any favors the last few games but thanks to other teams dropping points as well, they’re at least guaranteed their 6th consecutive playoff season. So that’s something nice. All that’s left to do is wait and see just where they’ll fall in the seeding and find out how their first round opponent will be.

Oh… and figure out if Jonathan Toews will be part of this year’s postseason run.

I won’t bother going into this game in much detail. The same problems we’ve seen over the last few games were magnified once again. The systems we’ve seen them run so successfully aren’t being utilized and as Sam said in last game’s wrap – the starpower isn’t there to bail their asses out. And now it could get much much worse with Toews being hurt on Orpik’s hit in the second.

With Kane already sidelined for the regular season and almost assuredly not at 100% even when he does return, it was going to be a steep climb to make a run towards repeating as Cup champs. With Toews out, that’s likely as difficult as climbing Everest wearing only a windbreaker.

Of course, Toews could be missing only a small bit of time. All we’ve heard from Q is that he’s “day-to-day” and it doesn’t appear to be anything serious. Though with the way the last few games have gone, it’s hard not to feel like the walls are slowly coming down on this year. I’m a long way from looking to just cash in the chips and wait for next year but the confidence I had in the squad is far from what it was even just a few months ago, mostly because the confidence that team showed on the ice has all but up and vanished.

It’s pointless to go on and speculate on what Toews’ injury may be or how long he may be out. The Hawks luckily have a fair amount of time before their next game and I’m sure we’ll be hearing plenty from all sources on Toews’ availability.

Let us once again point out though just how moronic it is to claim that having an enforcer, or at least whatever it is the Hawks claim is their enforcer, keeps other teams in check. If teams were truly scared of someone like Bollig or Brookbank, that hit on Toews would have never happened. While the hit may have been borderline at worst (I think it was clean), there was no hesitation or fear from anyone wearing black and gold. There was no response. The Hawks did the right thing and tried to get back in the game and grab the equalizing goal but came up empty. Having Bollig out there did nothing to help in any way.