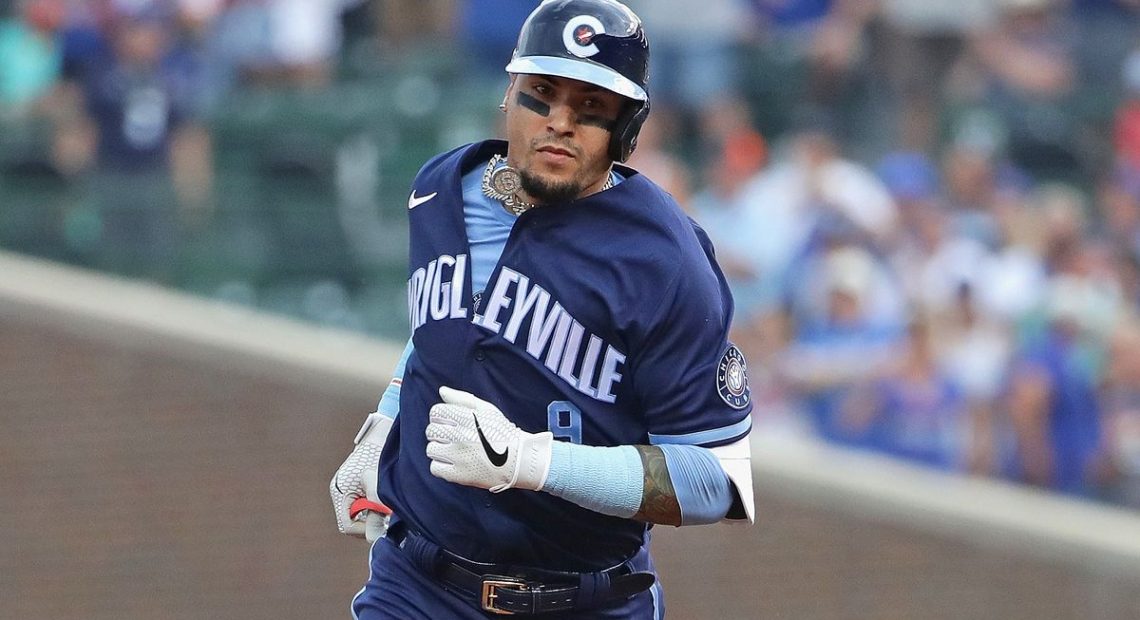 Luckily for us, we will no longer be subject to the bad baseball that the Arizona Diamondbacks have brought to us over the past few weeks. Despite the blowout on Saturday that we’d all rather forget happened, the Cubs otherwise made quick work and picked up two wins against Arizona this weekend.

It doesn’t really matter for us at this point, however, as we continue to move about our lives alongside a baseball season that no longer matters. We continue to enjoy what is likely some of the final games of Kris Bryant, Craig Kimbrel and perhaps others in a Cubs uniform as the trade deadline looms like a dark cloud over fans and all of the Cubs baseball writers. But hey, David Bote’s back! And he hit a home run! These are the silly things we get to grip onto post-deadline, are you excited?

The Cubs never cease to get their offense going during games where nothing matters anymore. In this case, it was the start of this series against the D-backs where the Cubs scored more runs in the first half of the game than they had scored in the last two games total against St. Louis.

Also amazingly, the Cubs didn’t wait until the tail end of the game to start producing. In the 1st inning, they scored three runs against the Diamondbacks after Bryant and Anthony Rizzo were both walked. Javy Baez homered easily to send all three home for a commanding lead to start the game.

The bottom of the 3rd was a bit of a disaster for the D-backs, as their starter Zac Gallen walked Bryant (again) and gave up a single to Rizzo that sent Bryant to third base. They ended up getting him out at the plate when Baez hit a ball to third, but it ended up not mattering. Matt Duffy, newly activated from the IL, walked to load the bases, and then Gallen threw a wild pitch to send Rizzo home. Nico Hoerner singled to score Baez and Duffy, and although he ended up being tagged out at second to end the inning, the damage had already been done. The D-backs would never recover. The Official New Backup Catcher (according to the Marquee announcers, of course) Robinson Chirinos had a solo homer in the bottom of the 4th to make things 7-0 Cubs.

Zach Davies pitched an okay game, which is not hard to do against the D-backs, who got 7 hits off of him and managed to score 0 runs. He also struck out eight batters in his 5.1 innings out, and with the Cubs going nuts offensively earlier in the game it would be enough to put him in line for the win. Not sure why he was put into the 6th inning after he was already at 100 pitches but keeping pitchers in for just a bit too long is Rossy’s favorite thing to do as manager.

Davies was replaced by Adam Morgan, who immediately gave up a double to score two runs that Davies had allowed on base earlier in the inning. After a quick mound visit, Morgan was able to reel it in and strikeout the next two batters to limit the damage, and it certainly helped that Chirinos hit yet another home run in the bottom of that inning as well; he went three for four today and had a great game.

Keegan Thompson threw the final three innings of the game and looked pretty good doing it, allowing only one hit, a solo homer. He also had two strikeouts and only walked one player. He got his first big league save of the night also, an accolade he well deserved. He is one bright spot in the lineup that I’m excited to keep watching in the future.

After putting on a good performance the day before, the Cubs got domed by the D-backs for this game, because of course they did. They had a 2-0 lead going into the 5th inning but ended up squandering it quickly and not getting the lead back.

It was in the 3rd inning where Alec Mills (a pitcher, you say?) doubled, Rafael Ortega singled and Bryant walked to load the bases. Baez grounded into a double play to make it a two-out inning but not before Mills was able to score. In the 4th, a solo homer by Willson Contreras made it 2-0 Cubs.

Mills pitched into the 5th inning before things started to go haywire, as he walked the first batter and later gave up a home run that tied the game. A double and another walk later put the Cubs in a dicey situation, but Anthony Rizzo was able to field a ground ball to end the inning. Mills got pulled by Ross before the 6th.

Dan Winkler made it through the rest of the 6th as relief with no issues; instead, it was Andrew Chafin, who can usually be relied upon to get outs, getting the loss tonight and having the bad game. In the 7th, he walked the first two batters and then gave up a single to give the D-backs the lead. A double given up after that ended Chafin’s day, as it became 5-2 Diamondbacks. Ryan Tepera was put in and was able to get three straight outs, two of them strikeouts, to get out of the inning.

Trevor Megill pitched 0.2 innings and gave up a walk and a single to put runners on first and second, where he was replaced by Rex Brothers. Brothers allowed a double and a home run in the 9th to complete the shellacking.

After a rain delay that lasted nearly two hours, Anthony Rizzo scored a run off of a double in the bottom of the 9th inning thanks to a wild pitch and some good baserunning. It wouldn’t be enough to score, and soon after that Contreras got ejected for arguing balls and strikes from the bench on Jason Heyward, having to be restrained by Ross as the frustration of losing to such a bottomfeeding team finally boiled over. It wouldn’t matter, as the game was already put away 7-3.

Fueled by a pair of home runs in the 1st and a Willson Contreras walk, the Cubs quickly jumped out to a 3-0 lead against the D-backs. Adding onto that, the newly-returned David Bote hit a two-run homer in the 4th inning, scoring Patrick Wisdom, who walked earlier. Despite the homer-heavy offense that made up the game, the Cubs were able to right whatever was wrong in the previous game in order to hold the Diamondbacks off the scoreboard and score a litany of runs on their own.

Trevor Williams had a quality start, a rare accomplishment for him. However, he deserves a pat on the back for his six strikeouts, no walks and only five hits allowed for the first 6.1 innings of the game. The bullpen also deserves a tip of the cap, as five bullpen guys pitched today, none of them going a full inning, and yet they allowed only two hits combined and one measly run that happened in the 9th. If you want to be nit-picky, it was Dillon Maples that could’ve been better; he walked David Peralta to start the 9th, and then a groundout moved him to second base, and a single drove him in. Maples hasn’t allowed two walks in an outing since May 30, so it will likely be something he can control moving forward. Kimbrel closed out the game and got the last out in the 9th, because of course he did.

The Cubs now move on to play the Reds this week, the final series before the July 30th trade deadline. The Reds themselves are barely over .500, 2.5 games up on the Cubs, but 6.5 games back of the first-place Brewers. They’ve only won three of their last nine games, although technically we’d be considered easy pickings for the Reds to try and gain on the Brewers in the division race, I guess?

The next time I write for you all, this team will look very different, as we likely move into a completely new era of Cubs baseball. Enjoy the players while you still can, and I’ll be back to wrap up this series and the subsequent trade deadline to assess the damage. See you all then. Go Cubs go!