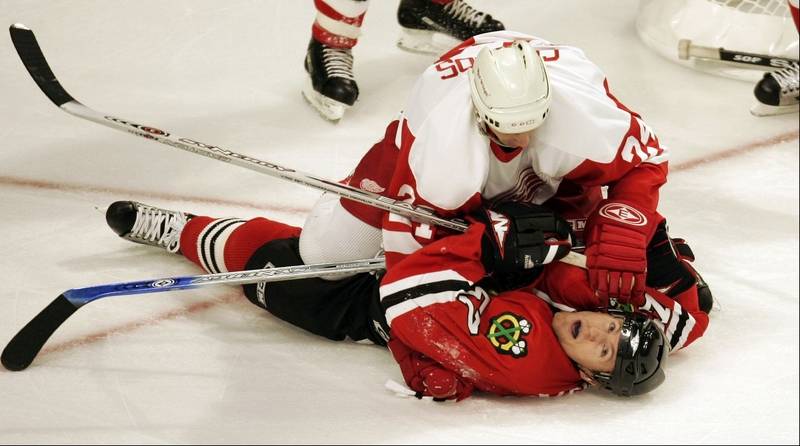 You were thinking it would be somebody else, weren’t you?

As far as forgettable Hawks go, Karl Stewart probably ranks somewhere between  Andrei Zyuzin and Jeff Hamilton. Stewart played 37 games for arguably one of the worst Hawk teams in franchise history, the 2006-2007 version. In those 37 games, Stewart scored 2 goals and 3 assists while registering 43 penalty minutes.

Stewart was the type of player that cro-magnon hockey fans love to tell you how great they are. He provided very little value when it came to possessing the puck, being creative in the offensive zone or even shutting down the opposition’s top line. What he did do exceptionally well was play two to three seconds behind the puck and then hit the guy who just sent a pass to his wide open teammate. And man, did he do that well.

But in a United Center with 2,500 people in it, this was enough to appease 75% of them and so a “fan favorite” was born.

Even though he was still only 23 years old, it was quite apparent to astute hockey observers that Stewart did not possess the speed, brains or skill to play hockey at the highest level for a team that would ultimately have playoff aspirations.

The Hawks were in the process of completing their rebuild. They had an influx of young talent like Seabrook, Keith, Byfuglien, and Sharp still learning the game at the NHL level. They had guys like Burish, Brouwer, Bolland and Fraser in the AHL. Toews was still a rumor but Blackhawks property and another high lottery pick was in their future. Even though it was hard to see at the time (who remembers the Brent Seabrook for Petr Prucha trade rumors?), they had young guys who were building into something. You didn’t know if it was special or if it would be a tire fire, but they had some high-ceiling talent.

In other words, a player like Stewart was not in their long-term plans. Stewart was a waiver wire pickup in October from Pittsburgh, picked up after the Hawks were hit with a ton of injuries to open the season. Hello for the first time, Michal Handzus.

To his credit, Stewart did have a nice stretch in December where he had a goal and 2 assists in three games that got everyone really excited (These were pretty depressing times). To Dale Tallon’s credit, he wasn’t duped into believing Stewart had magically turned himself into something he wasn’t, a NHL player.

So at the trade deadline, Stewart was launched to Tampa Bay for a former 8th overall pick, Nikita Alexeev. Now, let me lay out this disclaimer in hindsight, Alexeev was complete garbage. But at the time, he had professional pedigree already playing half of two seasons with Tampa Bay and Springfield in the AHL and scoring at a relatively low clip. And again, he was still just 6 years removed from being a top 10 pick. For the Hawks to take a flier on him should have hardly been considered an outrageous deal. Certainly not when it cost them the likes of Stewart who was a WAIVER WIRE pickup four months before.

Don’t tell that to this guy.

The kids are great, and he deserves credit for drafting them, but what is the Hawks’ identity? You can’t answer that because the Hawks don’t have one.

Last season, Tallon traded a fan favorite in Karl Stewart, a fourth-line grinder who hit everything in sight, for a Rick Dudley Russian named Nikita Alexeev, who had zero PIM in 15 games and was gone shortly thereafter.

I hardly think Nikita Alexeev is no longer in the NHL because he couldn’t supply those precious penalty minutes every team desperately tries to get their hands on. Alexeev wasn’t offensively skilled enough for a top 6 role and wasn’t defensively responsible enough for a 3rd or 4th line role. But was it a colossal failure of a trade that should have been referenced in a “Why Dale Tallon should be fired” column? Probably not.

At that point, he had already handed out enough bad contracts to cost him his job (Aucoin, Cullimore, Curtis Brown, Matthew Barnaby and Khabibulin just to name a few). A throwaway trade between two guys who played a combined 16 games in the NHL after the 06-07 season, however, is not.

If Stewart was part of the Hawks identity, it’s an identity of a team that is a perpetual lottery team. Sometimes it may seem that I’m still chasing Karl Stewart’s ghost when I write a 1200 word opus for the 1,328th time about why “fan favorite” Blackhawks player du jour is bad at hockey and detrimental to their style of play. And maybe that’s true.

But it still doesn’t deny the fact that Karl Stewart sucked and was one of the final chapters in the darkest of Hawk days.