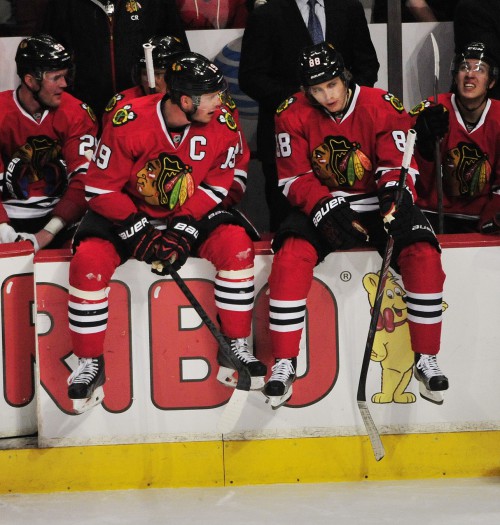 You wouldn’t like the Hawks when they’re angry. At least not if you have to play them.

While the worry of a malaise setting in is still very much real, at least the Hawks care enough to respond to a truly dogshit effort, like the one they put up on Friday. Even on their third game in four nights, the Hawks came out looking to prove something, and basically had this one dead and buried by the end of the 1st. They could have been up four or five after 20 with a couple different bounces. The Red Wedding Line was on another planet. They were certainly playing a different sport than the Wild had ever seen. Kane’s line wasn’t that far behind, and Shaw-Teuvo-Sharp may have been better than both of those but didn’t scratch. Total team effort. And Oduya and Hjalmarsson only got scorched once!

Let’s get to it after the jump.

-I’d like to think Mike Yeo won’t get fired this week, because I don’t think he’s top of the list for what’s gone wrong in St. Paul. But while the Wild battled hard in losses to the Hawks and Preds earlier in the week, the Hawks first three goals tonight were all a result of standing, watching, and reaching. Hossa outworked Blum in front after Saad and Toews were allowed to cut through the zone without merely warm breath on their necks. Three guys were drawn to Kane while Bickell had a long discussion with Estragon waiting for Kane’s pass. Brad Richards skated unmolested down the wing, all three forwards watching a 3-on-2 in front of them and none there to deal with the blocked shot. That’s not a good sign for a team that needs a major turnaround and now if it’s going to make anything of this season. And the Hawks are not a team that needs extra space to tear out your organs.

-Ok, this is where I’ll warn you that if you’re sick of reading about Teuvo, skip to the next bullet. Better tonight than he was in Edmonton, though neither the Oilers or the Wild on the second of a back-to-back are the sternest test he’ll see. But he, Sharp, and Shaw made something happen on almost every shift, and the ease with which Teuvo fires off passes and shots really gets you shaky in the knees. I’m going to go ahead and think that letting him marinate on a wing for now is probably a good thing, but if this keeps up I’d like to see him back in the middle before too long. It can’t be too long now before he sets up Sharp for something. According to War On Ice he had five scoring chances on his own. That’s where you want to be.

-Mayby Marian Hossa was just pacing himself earlier in the year?

-Andrew Shaw won 8-of-10 draws. This has actually been a regular occurrence lately, and maybe that’s the reason Q is keeping him at center. If it is, that’s dumb but whatever.

-Marcus Kruger and his line were once again buried possession wise. They didn’t have a matchup problem as they saw every one equally. They did start twice as many shifts in the defensive zone, so they were never going to be up big in possession but they can do better.

-So that’s 78 saves out of 81 shots in his past two starts for Crow. It’s too much work, we’ll blame tonight on score effects, but at least he’s looking a little better than he was. .924 and 2.15. And people complain about his guy.

Think that’s about it for this one. Not much to say. Pretty satisfying. And now four days to let it soak. Soakin’ it.