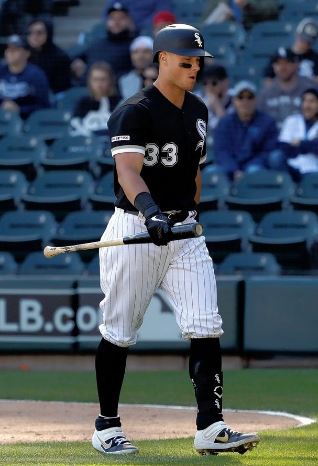 James McCann’s hot start to this season was easily one of the biggest surprises in the baseball world. He was, well, bad in his first few years in Detroit, never posting a wRC+ better than 95 and never quite adding much defensive value as a catcher either. Most teams will deal with a sub-par bat behind the plate if you can at least be a good framer and/or have a strong arm to control the run game, but if you’re not bringing any of that to the table, you have very little value to the team, even as a backup.

Quite honestly, McCann hasn’t brought much to the table in the framing or strong arm regards this year for the White Sox, either. He ranks 27th in MLB in average pop time, which has him in the 22nd percentile, and he is in the 14th percentile among catchers in framing, per Baseball Savant. There are plenty of good thoughts out there about how valuable framing actually is when we know that by and large umpires are just terrible at their jobs, but it’s still pretty easy to tell who is and isn’t good at it, and McCann is not.

However, the Sox haven’t exactly needed him to be that good at it because he has handled the pitching staff very well, and by “pitching staff” I of course mean Lucas Giolito. While it would unfair to Gio to attribute too much of his 2019 success to McCann, Giolito himself has lauded the catcher for his game planning and preparation, and all of that has certainly helped accentuate (you didn’t know I knew words like that, did ya) all of the mechanical adjustments Giolito made over the offseason to help turn him into the ace-level pitcher he has been this season.

And oh yeah, McCann was smacking the shit out of the ball, which certainly made it all worth it.

McCann’s offensive epiphany was certainly surprising but welcome in a lineup that, on opening day at least, didn’t figure to have more than three or four above average hitters, and that was assuming that Moncada and Anderson progressed (which happened) and Eloy’s natural hitting followed him (which took a month, but also has kinda happened). It was really nice to have a reliable bat that you could slot into the middle of the order and feel comfortable, and nobody in the world thought McCann would be that until it was actually happening. He was seemingly hitting everything, and felt especially reliable in clutch moments. And while I certainly enjoyed it, I always felt like I was waiting for the other shoe to drop.

By “shoe” I mean BABIP. Which until mid-June was over .400, but even when it eventually dipped below that mark on June 14 (if I used FanGraphs’ splits tool correctly) had already been steadily declining. In fact, it dropped quite quick in June, falling from .432 June 1 to .390 on June 14 (but rebounded to a .403 at the end of the month) and now sits at .383.

So, he had been getting very lucky at the beginning of the year, and in a lot of ways that was the source of his outbreak. But that luck at the plate lately has run out. Since the beginning of June he is slashing .241/.310/.447 with a wRC+ of 99, and his BABIP is a much more normal .325. All of that is fine. July is…. ugly.

But the big concern is that when look back at his career, a .290 BABIP is actually not an indication of bad luck. In fact, it’d be on the higher end of McCann’s past numbers. In Detroit from 2014-2018 his BABIPs were .300 (in nine games), .325, .283, .300, and .282. That is certainly troublesome when you consider that his season line is currently at .383, meaning there is potential for some serious correction on the way and he could be in for a truly terrible second half.

Or to be a bit less rosy about it, we might be about to see the real James McCann stand up.

There are a lot of questions that are to be raised from this exercise, none of which I have actual answers to. Primarily, as I just referenced, I am curious if the first half had anything real in it that he can build on, or if it was built entirely on luck. There is also a good chance part of this is the result of playing so damn much, as he’s been in 72 of the Sox 99 games this year and caught 66 of them.

In the end, the 2019 season means very little to the White Sox outside of the most important players playing well, so if McCann struggles in the second half it won’t be that big of a deal, it will just make them less fun to watch. But 2020 figures to be very important for this organization, and as such we need to know what McCann is. He’s worth keeping for 2020 if only for Lucas Giolito, and hopefully Michael Kopech and Dylan Cease can have similar success.

The one conclusion I do draw from all of this, though, is that the White Sox should not head into this offseason assuming McCann is their primary catcher next year. More specifically, they should not let McCann’s presence on this roster preclude them from potentially being interested in a guy like Yasmani Grandal. McCann is a good catcher because of his prep work, but if the bat isn’t at least close to average, the glove and arm don’t do much for you either, and he’s back to backup status.