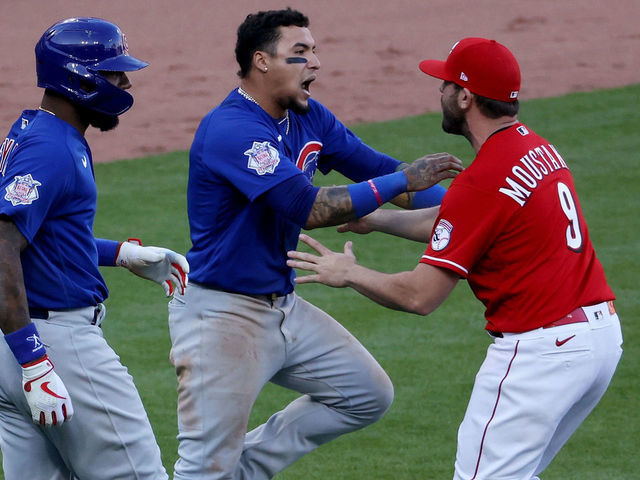 Tired of boring Cubs baseball? Well you were in luck, because this series had everything you could ever want and a bunch of crap you didn’t: benches-clearing brawls, pitchers collapsing, a 10-homer game, two injured players and no lack of offense.

Things were certainly less bleak this series compared to the last. Despite the Cubs losing two games, at least the bats weren’t dead and everyone was scoring. Our rotation, however, is genuinely atrocious, and the bullpen we have built up can only do so much when the starters dig a huge hole for them to climb out of. Additionally, this all came at the expense of Willson Contreras and Ian Happ, so you have to take the good with the bad.

Here are my observations from the games this weekend.

The Cubs came out in front early in this one, but because Jake Arrieta (unironically the Cubs’ Best Starter) only lasted until the 4th inning, the Cubs ended up down 6-2. He gave up a homer, a single, another two-run homer and a walk in the 4th inning before getting pulled, and he had been unraveling the inning before as well. The Cubs wouldn’t be able to make it back on top, which became the story of two-thirds of this series: this team could always make it back to tie it but never get ahead.

At least Kyle Ryan With Two First Names could stop the bleeding! After yanking Arrieta, David Ross put him in and got the second out with a strikeout. Then Ryan gave up a single and a double to dig the hole deeper, 7-2. Justin Steele was next on the bullpen list who actually looked pretty good, putting up 5 (????) strikeouts through two innings to keep the Cubs in the game, despite the offense trying their best not to stay in this game. Dillon Maples also looked good, striking out three straight batters and getting another strikeout in the 8th to keep the Cubs in it.

Additionally, Willson Contreras exited the game in the 5th inning because of hamstring tightness. The Cubs can never have good things. Contreras avoided a stint on the 10-day IL, instead electing to take the rest of this series off (until the Sunday disaster, of course).

The Cubs finally started rallying back in the 7th thanks to the likes of Eric Sogard walking, Kris Bryant doubling to make it 8-3 and Baez RBI-ing to make it 8-4. The curse of RISP, however, came back to haunt the Cubs in the 9th inning when they blew a bases-loaded situation. David Bote walked up to the plate and it was his time to shine; remember that one time three years ago when he walk-off grand-slammed to win the game? That certainly didn’t happen here. He grounded out unimpressively to lose this game.

If anyone is tired of watching Zach Davies give up runs, you’re certainly not alone. It’s what the baseball gods have decided we deserve to watch for doing something as stupid as trading Yu Darvish for nothing in return. Luckily, the baseball gods took pity on us and limited our suffering this game, as the Reds wouldn’t score past their two runs in the 1st inning.

After Davies’s double, single and sacrifice fly he gave up, the Cubs’ bats started heating up. Tony Wolters, the new new backup catcher when Contreras is out, was able to single. Then Davies tried to endear us Cubs fans by sacrifice bunting to score Nico Hoerner, and then went back to not endearing us when he loaded up the bases in the next inning.

Bote doubled in the 4th, getting the hit that he couldn’t get last game, and Jason Heyward was able to bat him in to tie up the game. In the bottom of that inning Davies once again gave up two singles and a walk, but the defense behind him was able to get things done, fielding any contact and keeping the Reds from scoring any more runs. The big news out of this game was the benches-clearing brawl started by low IQ individual Amir Garrett and Javy Baez, who was not too happy to watch Garrett get overly celebratory after striking out Anthony Rizzo. Lots of shouting and fighting ensued, including Javy flipping off Garrett live on national Marquee television.

The Reds had a myriad of highlight-reel defensive plays this game, from getting players out at the plate to making diving catches in the outfield that nobody has any business catching. The fact that the Cubs came out of this game with a win at all will hopefully be the start of some better baseball for this team.

BUCKLE UP. This game was a tire fire the whole way through. And it was offensively explosive early and wouldn’t let up for 10 innings. In the first two pitches of the game, the Cubs set the tone by hitting two doubles to go up 1-0, but the Reds answered right back in the bottom of the inning to go up 2-1. Please also remember that Tony Wolters stole home in the 2nd inning and were it not from the Baseball Gods from On High in New York with their Secret Camera Angles that they will not release to anybody, this game would have been over in the 9th inning and we could have minimized the catastrophe that was the final few innings of this game.

Hometown Boy Trevor Williams was the starting pitcher, but by the time I’m writing this I had seen seven Cubs pitchers after him and his innings felt like they were worlds away. He was bad, though; really bad. But what pitcher wasn’t this game? The poor kid got pulled in the 3rd when he gave up three home runs in one inning, allowing the Reds to go up 6-4.

There was then a never-ending stream of bullpen pitchers being trotted out for the Cubs for the next seven innings. One of them was Keegan Thompson, making his Cubs and MLB debut. This is obviously a tough game to make your debut when the offense in both dugouts can’t stop hitting. Thompson threw a lot of balls and gave up a walk and a single but the defense behind him helped him get out of his first MLB inning without giving up any runs.

Alec Mills came in for a while, but he didn’t look as strong as he usually does, especially after hitting a guy, allowing a single, loading the bases, hitting Mike Moustakas and putting the Reds back in front. And then allowing a two-run single to make it 9-6 Reds. I think it’s probably okay to wipe the slate clean for every Cubs pitcher we saw, however, because of how weird this game was.

Who’s ready for injury? Thought the injuries would be over with this series? Think again. Hoerner and Ian Happ collided in the outfield in the 8th inning trying to catch a fly ball. Hoerner made the catch, the throw and the out while Happ was writhing on the ground in pain. After a ten-minute game delay, watching the poor guy stand up and immediately sit back down on the field and eventually get carted off the field, I knew nothing good could happen for the rest of the game. (Postgame, Ross said that Happ felt “fine, pretty good,” which I doubt, but there’s no word from team doctors yet about what’s up with him.)

By this point, Rossy had literally played everyone off the bench except for Contreras, who said he could play if absolutely necessary. And that’s exactly what happened. A defensive shuffle like no other ensued as Contreras put on his catcher’s gear, Tony Wolters went to second, Hoerner went to left field and Bryant went to center field.

Then it was time to watch Amir Garrett be the incredibly annoying man he is after striking out two Cubs and intentionally walking Hoerner, continuing to yell at people about how that’s what’s up. Hilarity ensued, however, when the Reds decided to pull him in exchange for Ryan Hendrix because the Cubs decided Jake Arrieta was next up to bat since 38 other people have pinch hit in this game. Arrieta struck out swinging, and in the bottom of the 10th Kimbrel’s passed ball and a Nick Castellanos single put us all out of our misery, with the Reds winning 13-12.

The Cubs are injured, now more injured than they were before. They are also exhausted, especially our bullpen. Things have been bad enough this season with none of our starters being able to get past the 7th inning, let alone to even still be pitching by the 7th inning. Now that seven (7) bullpen pitchers have played today, they will all be exhausted too.

And the best part about it all is that the schedule does not let up, oh no, that would be silly. The Cubs start a three-game series against the god damned Dodgers of all teams starting tomorrow. The Dodgers are 17-12 and no longer top of the NL West because the Giants are there, although the Giants have played two less games than the Dodgers so everything will right itself the way this league intended eventually. We will probably get crushed. See you then.