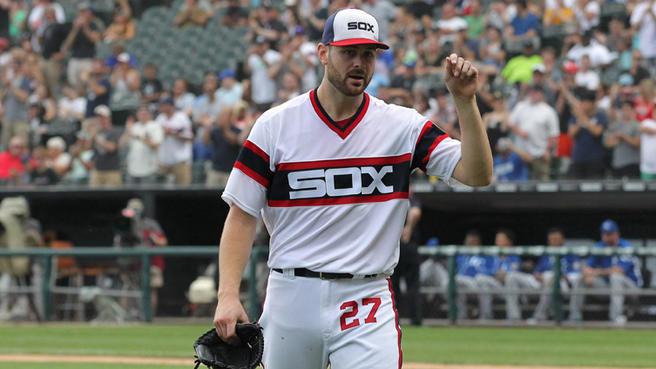 Things have been rough for the White Sox in July. A 7-15 record, injuries have kept Eloy Jimenez and Tim Anderson out for either all of it (Anderson) or part of it (Eloy). They were swept by the Royals and A’s, and after showing some life against the Rays, they chucked that into the bin by laying an egg against the Marlins and Twins.

In the grand scheme, their July record doesn’t matter. Whether the Sox compete or don’t as soon as next year won’t be because of a couple wins not gotten in this month. Unless you’re using it as a referendum on Ricky Renteria, though most concluded long ago that when the Sox matter in the standings again, Ricky is going to get himself left by the side of the road and chasing a piece of meat tossed out of the car as it speeds away. Again.

Still, the month has been rough for Lucas Giolito. After a May and June that got him to the All-Star game, introduced him to the top echelon of pitchers in the AL, July has seen a 7.08 ERA, and a slash-line against of .291/.358/.547. That’s some bad slashes right there. Certainly if Giolito were to have this current balls-up continue through the rest of the second half, one would have to reconsider the projection of him on top of a rotation next year.

However, if you’re a Sox fan you don’t have to worry, because that looks unlikely.

The overriding factor on Giolito this month has been luck. In that he can’t seem to get any. Some of it is a bit of a correction, as in May and June, Gio’s left-on-base percentage was 84% and 90.5%. In July it’s 63%, which is about 12 points lower than average. So far more runners he’s letting on are scoring, which basically speaks to sequencing. And there are more getting on base against him because his BABIP in July is .357, just about 80 points above his season mark.

Because Gio isn’t giving up any different contact. His line-drive rate is actually lower in July than it was in May and June. His hard-contact rate is lower than it was in May, and only three points higher (31.8 vs. 28.1) than it was in June. It’s just more of those baseball are falling, though the Sox defense in spots could have something to do with it as well. Still, this is mostly bad fortune.

That doesn’t mean everything is rosy, though most of it will be corrected simply by regression and what not. As I mentioned in the Royals recap, Gio’s change-up has lost just a touch of bite. 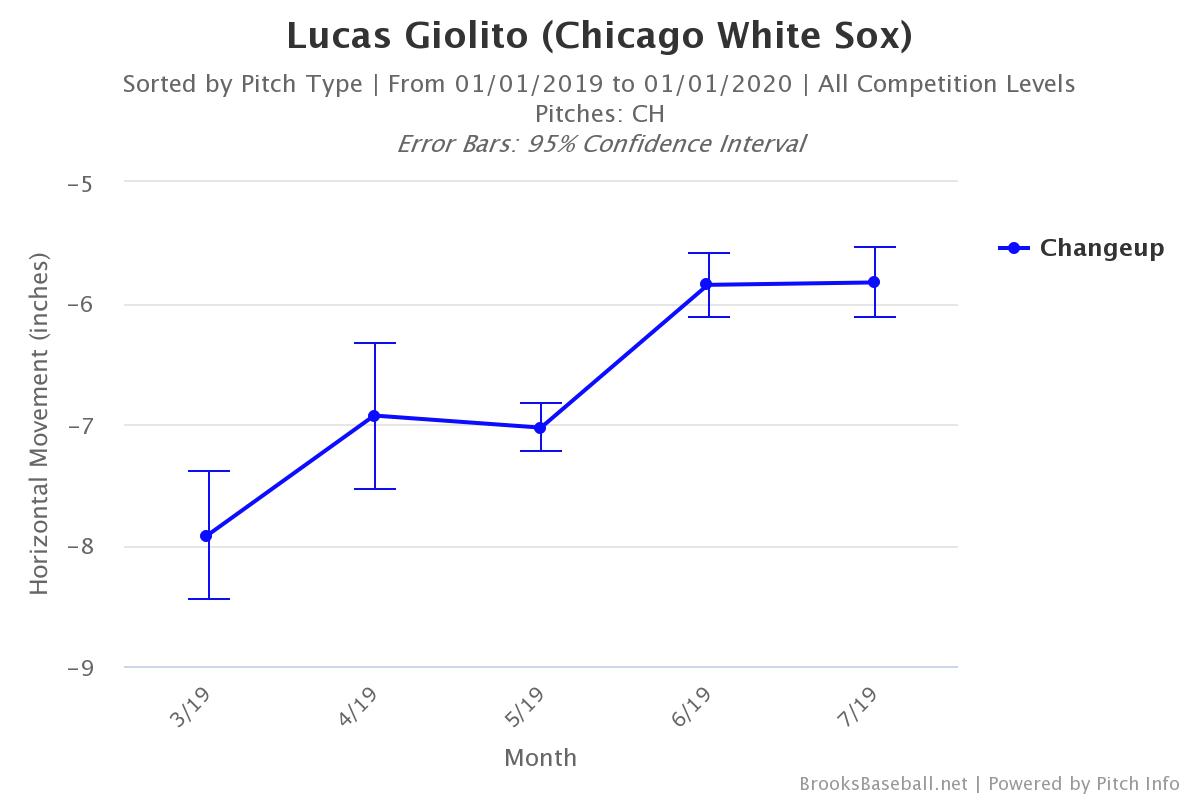 Now it’s been the same in June as it was in July, which speaks to luck again, but isn’t getting off the barrel or bats quite as much. You can see that in the greater amount of slugging against it: 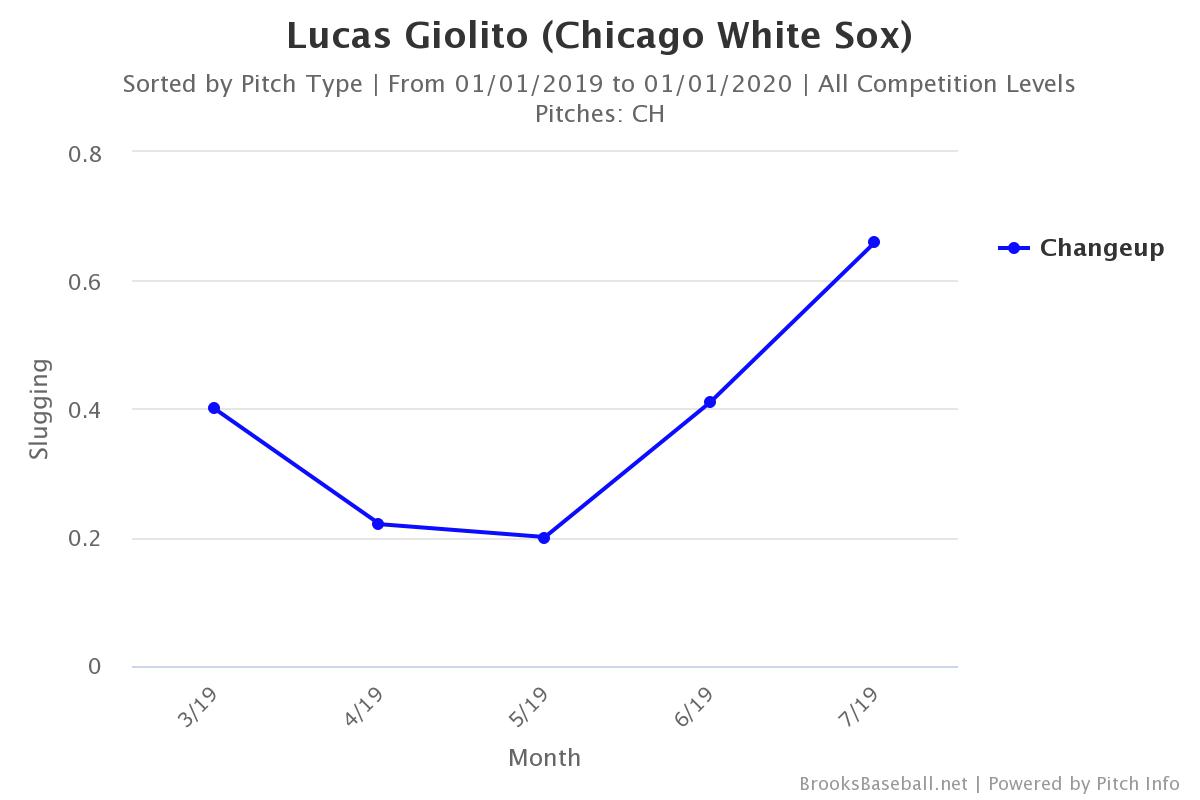 That’s against both righties and lefties, but Gio mostly throws the change against lefties. It’s movement away from them, as with most change-ups from right-handed pitchers, that’s the key. But it’s actually righties who have been crushing the change this month, slugging 1.200 against it even though he throws it about half as often to them as he does to lefties. And the difference from earlier in the season is that he’s been leaving it up too often: 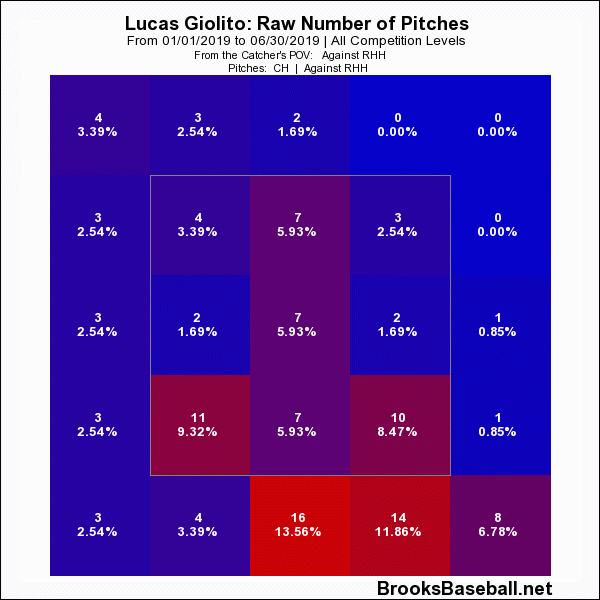 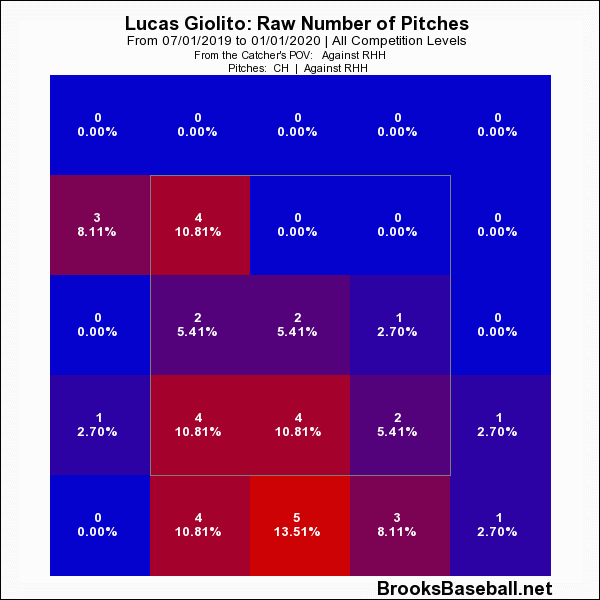 These are easy corrections though, and as soon as Gio’s metric even out, things should be fine. He has to throw the change to righties sometimes, as otherwise he’s just fastball-slider, but when he keeps it low and in, he’ll find the mark once again.