An Inch Is Better Than Nothing 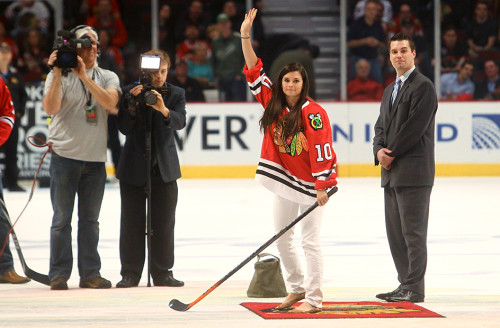 At least I suppose. In what turned into, somehow beyond belief, into one of the dumber debates among Hawks fans in recent memory, the Blackhawks and John McDonough announced they won’t have Frank Pelico play “The Stripper” during the shoot-the-puck what-have-ya during the second intermission. This seems like the smallest of gestures, and the easiest one in the world, but at least it’s in the right direction no matter how miniscule.

I still can’t quite fathom how any Hawks fan would cling to this one small part of what is really a dumb tradition anyway, and one you wouldn’t even notice if they took away without any fanfare. Honestly, when the NHL banned on-ice promotions late in the playoffs to help keep the ice in any sort of usable condition, did you even notice at all? Of course you didn’t. I suppose there are always neanderthals out there who will cling to anything once they feel they’re being attacked or missing out on something they once thought was theirs. It’s really nothing short of pathetic on this one, though. We’d all be better off without them, I know that.

I suppose it’s the ultimate lash-out from those who still mourn the loss of the cult-status of the Hawks and their fandom (which, on some level, I do get, just not on this one). It’s a bitching that the Hawks are now mainstream enough to make people notice some things they do wrong and want changed. They no longer can fly under the radar. No one really clings to “The Stripper” itself, and I bet most people didn’t even know it was being played. Honestly, I never noticed the organ during the thing, because I’m rarely watching the shoot-the-puck. I’m either outside smoking or in the concourse hanging with friends or at home setting myself on fire. It’s a clinging to a certain type of Hawks experience that’s probably gone.

Of course, John McDonough didn’t quite manage to not step on his own dick again, at least partially. The point of #BanTheStripper wasn’t solely to get some fucking song off the organ for 30 seconds. When asked about the Ice Crew, the far bigger offense to female Hawks fans, McDonough could only come up with “they’re common around the league.” This has to be the lamest excuse ever. Everyone else is doing it! It’s like something you’d expect to hear from your teenager when you find his weed in his room (in my case, I could just point to the rest of my family as examples to keep my mother from screaming at me).

I’m sure McD and Jabe Blunk will squeeze this orange for all the good PR they can and hope that’s enough. It’s our job, along with our new hero Casey Runthade and all the other Chicago blogospohere to make sure it isn’t.

Hey, at least we know they’re listening? Like, sometimes? Now about that ice surface…