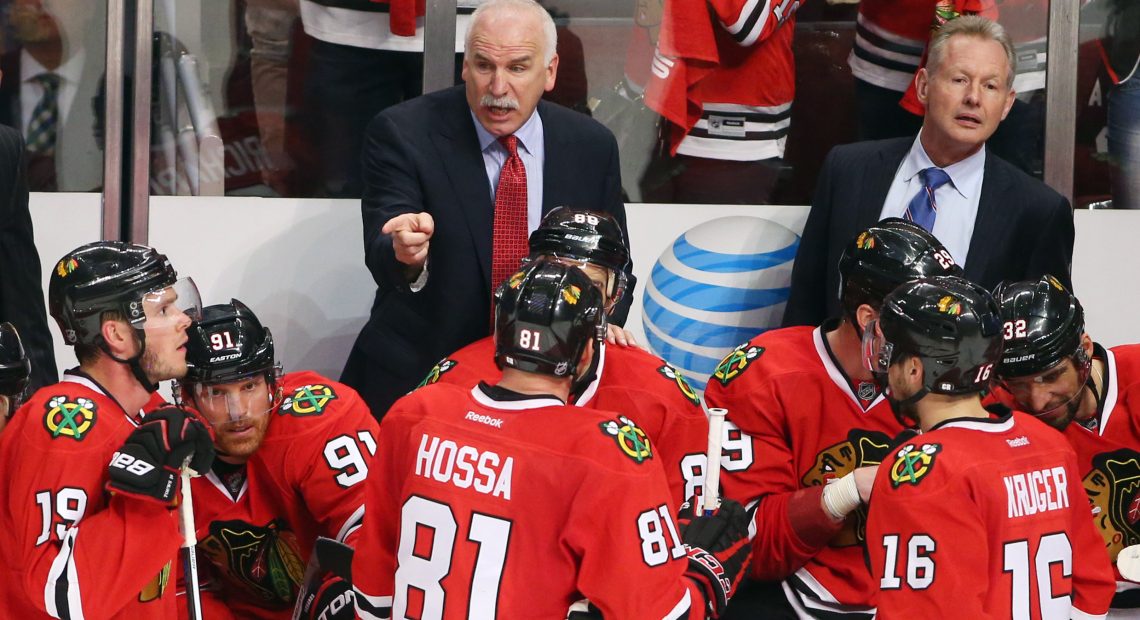 3-0, 3-3. 4-3. I feel like we’ve seen this movie before a couple times. The only difference tonight was the Hawks weren’t the ones scratching and clawing their way back into it.

You saw the game. You know the specifics. Let’s get right down to it.

–That first period wasn’t vintage Hawks, per se with the puck possession, pin a team deep in their end for shifts on end only to finish with a goal or power play. But it was opportunistic Hawks.

Brandon Saad didn’t miss his chance when he blew past Ryan Suter and roofed it over Devan Dubnyk.

The Hawks clearly found an opportunity to exploit a Minnesota offensive zone face off play. With Spurgeon and Scandella lined up on opposite sides and close together, the Hawks designed a faceoff play for Vermette to push the puck strong side with the winger, in this case Brad Richards, breaking up the middle.

The play worked perfectly as Vermette easily won the draw, Richards took the puck out cleanly with a head of steam, undressed Scandella at the blue line and hit Kane for a perfect one-timer over Dubnyk’s glove.

The third goal was created after an extended zone play by the fourth line and was finished by Kruger. Desjardins made a strong play by maintaining possession even though he was flat on his stomach and getting his face shoved into the ice.

It wasn’t that the Hawks were dominating zone time in the period but every opportunity they were generating, it seemed like it was finding its way past Dubnyk.

–Of course, it wouldn’t be your Chicago Blackhawks without a rapid and violent swing in the other direction.

It started with Brent Seabrook and Marcus Kruger contemplating the high price of coconut milk while Jason Zucker stood wide open in front of the net for a tip in.

Either way, Crawford had an opportunity to freeze the puck but for whatever reason, he didn’t. Vanek passed it to a wide open Zach Parise and the lead was down to one just five minutes into the period.

The third goal was a result of Duncan Keith missing a wide open breakout pass, then getting outmuslced in the corner, then regaining possession only to make another terrible pass that Granlund happily deposited behind Crawford.

After a timeout by Quenneville, the Hawks seemed to settle down and tighten up their breakouts, neutral zone play, etc.

–After Teuvo’s goal put the Hawks in front for good, the Hawks’ third period was about as strong as their third period against Nashville. Minnesota’s best chance came off a goofy bounce off the partition, Parise interfering with Hjalmarsson and then Pominville shanking it off the glass.

Not exactly the type of play you can draw up and punish the Hawks for continuously.

–Devan Dubnyk, another goalie who makes glove saves look like Dr. Octavious trying to floss. 3 of the Hawks goals were launched over Dubnyk’s glove. There were countless other shots that hit Dubnyk in the glove only to bounce out and lay in front of him.

Maybe it’s only because it’s the second round, but it’s funny that there isn’t already a national crisis, various table talks and hot takes dedicated to Dubnyk’s shoddy glove.

–Other than his wraparound attempt in the third, it sure seemed like Jason Zucker was much less visible after Rozsival cracked him along the boards late in the second period. Whodathunkit.

–At the start of the game, I was thinking about Teuvo and how I was going to write about how we should really limit expectations for him in the playoffs. After all, Eric Daze played 16 playoff games his rookie year without getting a point. Brandon Saad went all the way to Game 1 of the Stanley Cup Final until he scored his first playoff goal.

So it’s not like it should be preordained that Teuvo will just suddenly become the player we all expect facing the toughest competition of his life.

Then he went and scored the game-winner. Even though it was a pretty fluky goal as well and more of Teuvo just throwing the puck to the net, but…….the guy just has a knack for making things happen. He’s got that gift and I don’t think it really matters how old he is or how little experience he has.

–Did you notice how fast Joel Quenneville tried to get Kane and/or Toews on the ice as soon as Jordan Leopold hopped over the boards? I’m half surprised he hasn’t designed some kind of cannon to just shoot them off the bench and directly into the offensive zone.

–As far as the penalty kill, the Hawks were kind of victimized by the aforementioned weird goal where something, but I’m not sure what, happened. Their other two kills in the third period, though, were very strong.

In the previous round, whether it was Nashville exploiting a weakness on the right half wall, or just a bad match-up for the Hawks, the Wild’s power play plays a little more into the Hawks set up.

Other than times when the Wild were able to cross the offensive blue line with a ton of speed, the Hawks closed down a lot of the shooting and passing lanes. Whatever was open, wasn’t open very long and the Hawks did a good job of not allowing extended looks at Crawford.

Something to watch as the series progresses, for sure.

–The pace of Game 2 may look a bit different than this one. Though the Wild have proven they can skate with the Hawks, I don’t think they’re necessarily going to push the pace. Mike Yeo, who probably used to call the Score to complain about Dick Jauron for his lack of 2nd half adjustments, will certainly look to try something different so his team doesn’t leave the first period feeling as though the armies of Helm’s Deep are surrounding them.

The thing with the Wild, though, is they’ve proven to be sort of unpredictable in this regard. On one hand, you’d think they’ll want to chip and chase a little more, make the Hawks skate the full 200 feet of the ice and all that other stuff.

But on the other, I almost think they may double down and keep forcing the Hawks to keep up the tempo with the hope they may eventually wear down.

Only one way to find out.