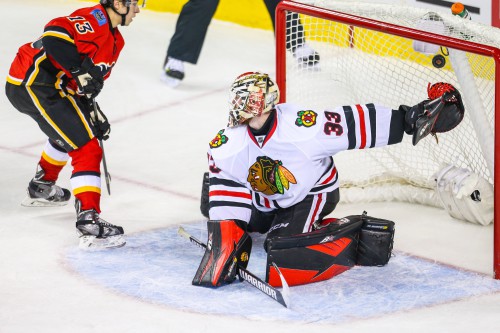 There’s only so much you can ask of the roster at the moment. If you include TVR who had less than 20 games experience, the Hawks had five guys skating tonight who weren’t in the NHL last year. Dano would have made that six, and Teuvo would have only added about 40 games of experience as well. Quite simply, there are just going to be growing pains.

That of course, is when you want the top of the roster to carry you. One part of it has, as Kane is probably the quarter season mark Hart Trophy winner. Panarin would certainly be the rookie of the year at this point. But once again, just like Leon Draisaitl before him, Sean Monahan got whatever he wanted against Toews. When on the ice against each other, the attempt count was 15-4 in favor of Monahan. The left wing isn’t all to blame this year. Toews has certainly earned the right to have a dip, and certainly will come out of it at some point. But if you need the biggest reason why the Hawks make it look so hard a lot more than they used to, there you go.

Secondly, we said before the trip that this would be something of an audition for TVR on the second pairing and whether he can make it look good as the more adventurous of the pair. Let’s see what the reaction to that audition would be so far…

TVR is carrying a CF% of 36% the past two games. And these are probably the worst two teams he’ll see on the trip.

Let’s see, what else?

-These Trevor Daley trade rumors get kind of funny when you realize most other teams will probably pick up that Q won’t play him more than 12 minutes.

-Who was worse tonight, Dougie Hamilton or Brent Seabrook? Be sure to show your work.

-On the plus side, this unleashing of Keith to go wherever he wants, essentially the Scott Niedermayer rover, show more creative thinking on the power play than the Hawks have had in years. It should at least keep some PK units guessing, especially when he gets used to it.

-On Monahan’s goal, Toews fell down on the faceoff and then both he and Seabrook went to cover Gaudreau on the wall, leaving Monahan all alone to pick up the rebound. I’m tempted to say Toews should stick with Monahan there, but clearly this wouldn’t be how Q draws it up.

Anyway, this is still the team that deservedly beat the Blues in their own building, and for that reason I would expect a much better effort against the Canucks tomorrow (I don’t see how it could be worse, other than goalie pants-shitting). The Canucks also don’t have quite as much speed at forward as the Flames and Oilers do. But the problems are real and need addressing.