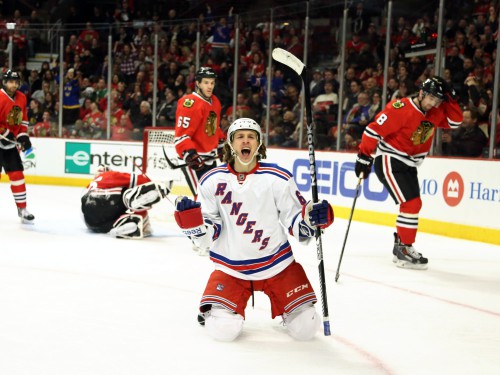 It’s been obvious to anyone that’s been paying attention that the Hawks’ game has been off since the turn of the calendar, if not a little before. Sure, Sharp and Hossa and Toews covered it up in New Jersey, and have at other times. But they certainly weren’t near their best on Long Island, or in New Jersey, the Sharks kind of dictated play on Sunday, and here we are tonight.

The Hawks had their spurts. The 2nd period, or most of it, was one-way traffic. But they didn’t start well, Crow gave up a couple goals he’d like back, and the 3rd was just kind of… meh. They thought about winning it, they didn’t really look like they wanted to until it was too late.

I don’t think it’s anything other than a midseason malaise. You knew there’d be a dip somewhere. The Hawks used to make it in March. Maybe it’s now. But some factors that we’ve been talking about were once again on show.

-Well, Q is certainly, finally seeing what we’re seeing. Marcus Kruger was shifted to the second line with Handzus flipping to the 4th line somewhere in the 2nd period. Of course that didn’t stop Kruger from creating Brandon Bollig’s goal by making a nifty defensive play behind his net, skating past a couple stationary Rangers, and then finding Bollig. What he didn’t do was fire some Hollywood pass 100 feet to some other Hawk forward standing still, and I hope everyone was taking notes.

Sadly, the shifting of Handzus to the 4th line makes that unit really leaden-footed. Which might explain why they got clocked in possession again. It also led to Smith and Bollig not cracking over 8 minutes of ice time. Geez, it’s almost like Handzus has no place on this team.

-I always love the reaction on Twitter when Bollig scores, as if I’d throw my hat down and yell, “CURSES! FOILED AGAIN!” I want the Hawks to win, and Bollig scoring helps them win. We’ve also said that when he gets time he has turned his writer into a pretty wicked one. He just never gets time. Because he can’t get there in time to get time. And his dumbass penalty led to the Rangers second goal, so he’s only even.

-Kruger is not the perfect solution for Kane and Versteeg, but he’s better than Handzus.

-Bryan Bickell was much better tonight, which is why he was the Hawks Corsi leader tonight. Though probably helped by Brandon Saad’s presence back on the 3rd line. It seems Q knows that both the second and third line need Saad, but sadly there’s only one of him. If only there was a player in the system who also drives possession and draws penalties….

-Chris Kreider is going to be a serious weapon one day. Hjalmarsson or Seabrook simply couldn’t handle him at times.

-The deciding goal was a turnover from Crawford, but I feel like a turnover at the blue line before that led to it. Someone help me with this. Though Leddy and Rozsival studying Carl Hagelin going to the net closely like he was a painting probably didn’t help.

-The Hawks were awfully cute again at times. I counted three drop passes that didn’t need to be made when a shooting lane was open. Other shooting chances were turned down for an extra pass. There are times for that. They seem to find all the times that aren’t.

-It says Andrew Shaw had six shots. I don’t remember any of them. Also, early in the 3rd after the Rozsival penalty was killed off, the Rangers were pinning the Hawks. So why was Shaw then sent out to take a defensive draw the Hawks had to have? He of course lost it, and McDonagh rang the post. Why even put  yourself there? It’s the same mistake Q made in St. Louis that did lead to a goal. Does he know Shaw sucks at the dot?

– I keep seeing Kane’s, Toews’s, Sharp’s, and Hossa’s (though not tonight) ice time hovering either just above or below 20 minutes, and I worry that we might want some of those minutes back in late March.

Just a loss. Nothing more to say. Gotta fight through the doldrums, if indeed this is what they are.