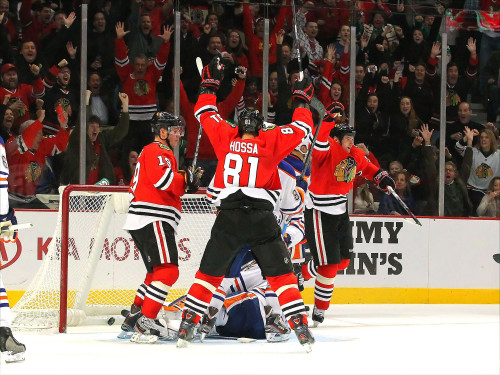 Ok, the title’s over the top and we won’t be sticking with it, but I thought it encapsulated where a lot of Hawks fans are at the moment (although in clearly heavy handed terms).

So over the next month or so, we’ll be going player by player to preview the upcoming season, which is just somehow 35 days away (and we’re sure they’ll go by in a smooth jiffy!).

There will be other posts to wrangle out what’s going on off the ice, but it’s impossible to discuss the Hawks right now on the ice without really considering two forms of them. While it’s hardly anywhere close to the most important part of the whole story, and no one should care all that much right now, the Hawks could look like just about anything depending on how things go.

With the full roster, including Kane, the Hawks might actually be deeper at forward than they’ve been to start a season for a while. That sound ridiculous at first considering the summer, but certainly they will start a season as deep down the middle of the ice as they’ve been since 2010. Toews-Anisimov-Dano/Teuvo-Kruger-Shaw as an alternate gives the Hawks five or six who can play the position (as much as we can qualify that for Shaw), and seeing as how they’ve entered the past few seasons with a combination of Toews, Shaw, and a confused shrug, that’s at least a start.

The Hawks are also as young among the forwards as I can remember, which is exciting in one sense in that it has the potential to keep them a plus unit for longer. And that would only be accentuated if Versteeg and Bickell are moved out. Toews, (he who shall not be named), Anisimov, Teuvo, Dano, Kruger, Shaw, Panarin, Nordstrom, and one or two other kids if they make the leap are all under 30, some aggressively so. So that’s… good?

On the flip side, I don’t have any idea who’s manning the left side of any line, especially if Bickell and Versteeg aren’t around. The 4th line has a couple left wings, Panarin plays the left side… and that’s kind of it. The right side could be loaded even if everyone doesn’t stay out of jail, with Hossa, Teuvo/Dano on the top three lines. There is still a lot of potential for a lot of goals (and maybe even two power play units that are competent? Nah, couldn’t be).

Now getting to defense. Hoo boy. Let’s put it this way: Any long term injury to the top three and the Hawks could be scrambling for a playoff spot. Yes, I’m biased, but I think fans are going to come to hate Trevor Daley awfully quickly and Q is not going to be able to magically make him competent in his own zone which he’s never been. Maybe Hjalmarsson can channel Gunga Din and carry all the water to keep it from going totally sideways, and he’s done that before. Daley will certainly provide more on the other end of the ice than Oduya, and again will contribute to the high potential for fireworks offensively. And he can QB a second PP unit if Keith has to QB the first (he doesn’t, but that’s a discussion we lost long ago).

The third pairing… oh christ I don’t even know. It’s TVR and… someone. Right now it’s David Rundblad. Maybe this is finally the time Rundblad takes the leap that GMs keep taking chances to see, but it’s hard to see where his feet will improve their quickness enough to play the game he wants to play (he does have good offensive instincts, he just needs five minutes for a shot or pass). And seeing as how the Hawks’ previous season ended about seven minutes ago, you would really rather not see Q having to play his top two pairings a combined 50 minutes a night starting on October 7th.

From there, everyone will still hate Corey Crawford but he’ll still be good. But the Hawks very well may need him to be better than he’s ever been to bail out what’s in front of him. Scott Darling gets to prove whether he can take over as starter one day, chances are Q is going to give him plenty of starts to do just that, or if he’ll be a throw-in to a deadline or offseason trade.

If it wasn’t for everything surrounding this team right now, it would actually be one of the more intriguing ones to watch and cover simply because the outcomes could be all over the map. We’ll try and stick to that through our previews, and cover the other stuff separately. But at some point, the two are going to combine and it’s not going to be pretty for anyone.

Who’s ready for the circus?