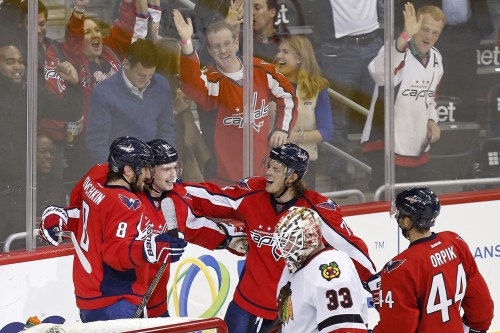 Hey at least they scored this time.

The Hawks have gotten their first losing streak of the new season out of the way tonight, dropping their second straight. This time it was to the Caps, and other than a brief spasm of give-a-shit in the 2nd period the Hawks looked about as craptacular as they did last night up the Acela in Philly. While I could dig for numbers to prove this or point out that or find some underlying cause, the reality of it is the Hawks have simply played like shit the past two nights. Sometimes it’s just that simple.

Some of the disjointed nature is from the amount of new bodies and combinations, at least I’d have to guess that’s a part of it. Every line and pairing has some new variable to it, and that sort of chemistry doesn’t happen overnight (especially as few of these combos were tried in the preseason). The Hawks rarely look this sloppy with their passing, but you would lose count of pucks flung to nowhere that leads to Ozzy, either because the Hawks missed a teammate or there simply wasn’t a better option. With the Caps employing the usual Trotz tactic against the Hawks of basically pinching them before they got to the red line if they even got out of their own zone, the only thing that produced a couple chances was banks off the glass behind the Caps defense that forwards could rush on to. They certainly couldn’t pass and pick their way through in the neutral zone.

That’s not all of it. Once again, the Hawks didn’t get much outside their second line, which was then broken up, or the occasional push from their fourth. Jonathan Toews had one shot. Marian Hossa was -5 in Corsi. Teuvo played the least of any forward who wasn’t Kyle Baun (and thus of an NHL quality). Patrick Kane had one shot.

Throw in some bad luck/poor finishing, with Desjardins and Kruger missing what would have to be called guilt-edged chances, and against a good team which Washington is you’re probably going to only play for the place pool. So it goes.

-It’s clear that Q still doesn’t know what to make of his defense, and nor should he. Tonight as he has most of the season, Keith and Hammer were paired and were tossed out against OvenChicken-Kuznetsov-Timothy Leif all night, and it didn’t really go well. When he was out there against that line Keith put up barely a 40% share, and I just don’t know if the Hawks can create enough with Keith’s push when there’s no one else to do it (more on that in a second). It was the same story last night as Keith spent a majority of his time against Giroux and Voracek. They didn’t score until they saw someone else, and Keith and Hammer held Ovie and Oshie off until chasing the game late. But the Hawks require more from Keith than merely holding down the other top threat. He could do that solely when Brian Campbell was around to push the play the rest of the time, or Leddy could pick up some of that slack. But the model the past two or three years is for Keith’s main job to squeeze the ice up toward the opposing net. I don’t know how they’ll solve this yet.

-It would be ok if Trevor Daley was at least being an offensive threat. While he really hasn’t had defensive issues, at least glaring ones, since the opener, you haven’t noticed him in the other end either. If he’s not doing that… then it’s not clear what it is exactly he does.

-Hossa had two chances tonight that he was a half-beat slow. One was a pass from Daley to the right circle and one was from Panarin. Normally Hossa would one-time those or at least get the shot off quickly. Tonight he took a half-beat longer, and by the time he was ready to shoot either Carlson or Holtby had closed whatever opening he had. Probably just a timing thing that he’ll rectify sooner rather than later.

-Bryan Bickell certainly looks fresher and quicker this year, and a little leaner which is probably related. He’s not going to turn any miracles here, but seeing what he can do on Toews’s wing is hardly the worst idea in the world given how the other candidates haven’t exactly grabbed the role by the neck.

-Teuvo found himself benched, but if the Hawks are going to see if he can handle center full-time this is going to be part of the process. I think four games in a row is probably the longest look he’s gotten in the middle, and he’ll need way more than that. You can complain about his wingers all you want but Tikhonov is not incompetent and it was Teuvo who was trailing Niskanen for his goal. Q is going to ride the waves with this, something he hasn’t shown a lot of patience for in the past. Still better than having Shaw there, which I’m sure we can look forward to on Saturday night.

-You really couldn’t script Olczyk praising Tikhonov taking a dumbass penalty chasing down Tom Wilson for a clean hit on Toews and even before he finished the Caps had already scored on the ensuing power play. Then he tried to walk it back five minutes later by calling it a “bad penalty.” I see you, Eddie O.

-Boy they can’t wait to tell you when Darling has been screened, huh?

Nothing much to see here. If the Hawks somehow cough one up to the winless Jackets on their second in two nights, you can probably ask a question or two.