I ain’t here for dinner, I want my tank! 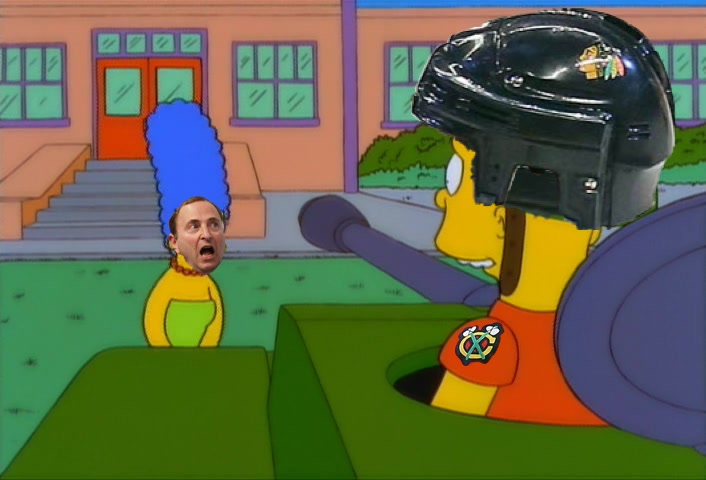 The Blackhawks are now 51 games into their season and they’re currently in 19th place in the NHL standings. They’re five points back of Colorado – let that one sink in for a second – for the second wild card spot, and the Avs still have a game in hand. And last night they played the Canucks, who are currently the second worse team in the West, and they looked pretty terrible. The fact that it came just one game they were stride for stride with the Predators basically shows that any hope you may get for this team moving forward is ever-fleeting.

The Blackhawks right now are basically in the same boat as the Indianapolis Colts are in the NFL – their best player is hurt and no one really knows what the situation is, because the team won’t say anything; with said star player, they’re probably a playoff team, but without him, they’re a bottom feeder. The Colts have a top-3 pick in the NFL draft in April, and the Blackhawks are looking like they’re going to have a good shot at one. And maybe they should start doing whatever they can to maximize that potential.

The Crawford situation has become a lose-lose for the Blackhawks. Crow’s health is obviously the most important thing, and you don’t want to rush him back and risk anything going wrong in the future because he is going to be the key to this team contending in the years to come. And we’re seeing how well things are going without him – you have two dudes who never spent significant time in the NHL trying each game to not play as bad as they did last game. So you don’t want to rush Crow back, but without him you’re up shit’s creek without a paddle.

Then you also have the question of whether Crawford coming back this year at all is really even worth it, even if you don’t rush it. We’ve already seen reports that he might miss the whole season, so it may not be a stretch to say that the Hawks bringing him back at all could be a form of rushing him back. And even if he does come back and squeeze you into a playoff spot, is it really going to be worth playing those extra games just to more than likely get bounced by Nashville or God forbid WINNIPEG? Even if your draft lottery odds are the longest shot, that’s better chance at the apparently generational talent of Rasmus Dahlin than zero.

And really, Dahlin is probably the kind of player that can get the Blackhawks back to where they want to be. The podcast crew discussed this week how the future at forward is looking fine, but there is absolutely no help coming on the back end. A lot of reports seem to indicate Dahlin is the best blue line prospect to be in the draft in a long fuckin’ time. He won’t fix all of their issues, but he’d be an instant jolt to a blue line that needs one badly, and if everything works out, he’s your next Duncan Keith. So it’d make a lot of sense for Stan to look at doing whatever he can to increase his odds of landing that kind of player.

Yeah, tank is a dirty word, but that strategy probably makes the most sense for the Blackhawks for the remainder of this season.

The problem is that, even if that was a route Stan wanted to go, he pretty much has no way of doing so. He has no tradeable assets that he’d be willing (or allowed) to part with. The only player that it could make sense to move and that might bring anything resembling value in return is Anisimov, but he has a full NMC. I guess the only good news on this part of it is that the roster they have at present has been bad enough to get them where they are already, so there’s no reason they can’t just keep spiraling.

But then there is the issue of the coach, who wouldn’t agree to participate in a tank if you held a gun to his head. For better or worse, winning is what Q does, and all he wants to do. He doesn’t even have the kind of Mike Babcock patience to let one year go to shit in hopes of the next several being significantly better. It’s not within his nature to do that. So in order to pull off a tank job, Stan would have to fire Q, and you know McD isn’t about to let that happen.

So you just have to hope now that the Hawks show enough patience and sense with Crawford as to not bring him back unnecessarily. And maybe in doing that, they generate their own form of an internal tank. And then we put our all of our hopes and dreams on the outcome of several ping pong balls. It’s the good ol’ hockey game.