History Is Told By The Winners 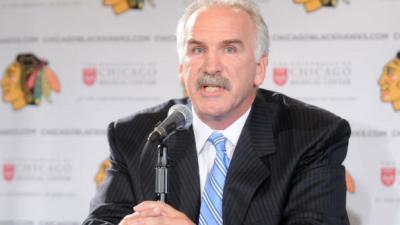 It’s not that it matters much, because it’s so far in the past. Doing revisionist stuff isn’t really healthy or prudent, but sometimes I can’t help it. And however it went down, the Blackhawks hiring of Joel Quenneville will go down as a seminal moment in Hawks history. It clearly could not have worked out better, no matter what our complaints and grievances have been along the way.

But I gotta tell ya, this “Oral History Of Quenneville’s Hiring” by Scott Powers is hilarious in parts. And that’s no fault of Scott’s, who is a friend and supporter of ours. He’s just recording what people said. What those people said though is just…oh my god, I can’t even.

Let’s go through some of it, shall we?

John McDonough, Blackhawks president: I can’t recall exactly, but I didn’t think we had a great camp. I don’t think I was alone in that thinking.

Right here, second quote of the article. I nearly fell off the couch reading this. Remember that when John McDonough was hired, which was less than a year before Savard’s firing and Q’s hiring, he made it clear he was not part of hockey operations. That wasn’t his duty or bag. He wanted you to know that. He would leave that to the hockey people.

So now all of the sudden he thinks the Hawks are having a bad camp? I mean, yeah, sure, he’s in the building and he’s watching practice and games I guess but…HOW THE FUCK WOULD HE KNOW?! What’s he comparing it to? He’d been in the job less than a year! What, did he do what he did for the Hawks game presentation and go around to every other team’s training camp and rip off what they were doing?

Again, this worked out incredibly well. But either McDonough is again trying to throw himself all over the credit for this hire, and/or he’s lying to you now or he was lying to you then. Or both! I just couldn’t let this one go.

Whenever something has gone right on the ice, McDonough does a reasonable impression of Usain Bolt to get in the way of any praise. This reminds me of the video of their second Cup win, when everyone is being interviewed about the 17 seconds. And McD is there to tell you the Bruins should have taken a timeout after Bickell’s goal. Oh, you think so, Toe McDonough? Your advanced hockey mind told you that?

Dale Tallon, Blackhawks general manager: It was kind of the end of the year and moving into the summer and into training camp, you hear things, and you develop and gather information and you go from there. It’s a day-to-day situation in our business. You’re only as good as your last game it seems.

You can see where Tallon knew he was fucked. Read between the lines here and what he’s saying is that McDonough and Rocky Wirtz hired Scotty Bowman as a consultant, because neither of them knew hockey from their ass, and essentially what Bowman told them was I can’t tell you what you’ve got on your roster until you’ve got a real coach running a real system, something Savard wasn’t and wasn’t doing. Oh and my son happens to be in the front office…

Remember that Tallon was also kind of forced to have Savard replace Trent Yawney. Savard was foisted upon SEVEN DIFFERENT COACHES as an assistant by Bill Wirtz. He was the pet project. When Tallon wanted to fire Yawney, Wirtz wasn’t about to pay two separate head coaches, so it was finally time to anoint Savvy. I’m not sure it was Tallon’s first choice, but it was his only choice. But it was yet another thing they could cuff to him when it came time to torpedo him a year later.

Brent Seabrook, Blackhawks defenseman: I remember playing like, I think Dunc (Duncan Keith), Soupy (Brian Campbell) and myself we all played 30 minutes a night the first three games and one of those was back to back. I remember being exhausted. So I don’t know if that was anything or what it was. It was probably nothing, probably just trying to win games.

You can see the problem. Also, under Savvy a lot of other teams thought the Hawks were horribly conditioned. You might recall a lot of blown leads the season before.

Stan Bowman, Blackhawks assistant general manager: The vibe that I remember was this didn’t have a feel like it was going to work in terms of Savy’s strengths as a coach, and I had known him for a long time because he had been with us for a while as an assistant coach. I just think sometimes your strength as an assistant doesn’t always translate over into being a strength of a head coach.

“I thought he was an idiot, so did everyone else, and I certainly wasn’t going to work with him when they gave me this job, which was going to be pretty soon.”

Bergevin: I said to him in the meantime, I said, “Joel, would you like to do some scouting?” He said, “I don’t want to travel, but I could watch games.” He loves hockey obviously, he loves watching games. I said, “That’s perfect. We have a kid in college, playing for CC (Colorado College), I believe, fast guy, I can’t remember his name, winger, left winger (Billy Sweatt).” He said, “I’ll watch some games in Colorado. If Dale wants that, I’ll just be like a part-time scout.”

I love this. They hired Joel Quenneville. To scout Bill Sweatt. Bill Sweatt. This is the story they’re giving you. They want you to believe this. Sidenote: Bill Sweatt just replaced the oil on your car.

Hmmm… I wonder what else might have happened in the fall of 2008 to keep the Hawks from making this move before the season started? What could it be? Just can’t put my finger on it…

To be fair, this arrest was already after camp had begun for the Hawks. So maybe this was the plan all along. But…come on. Look, the Hawks had a buzz, even after missing the playoffs the year before., Everyone around town knew big things were happening. And they were terrified of any bad buzz encroaching upon it. So maybe firing your coach who was the team’s most popular player for a decade and a half wasn’t something they had the total stomach for. Replacing him with someone who just had a DUI would have made it worse. They didn’t want anything to ruin the momentum.

But I’ll let you decide what you believe more.

Brent Sopel, Blackhawks defenseman: Having Joel on the staff, you knew something was going to happen at some point and time. You don’t bring Joel Quenneville, a guy who had been around the league and was known for what he had done all those years, you don’t put him on a staff. I felt at some point and time he was going to be the coach. When that was? Was that going to be in two weeks, two months, two years? But that was the feeling that I got.

Torchetti: I think we kind of got our ears up. I think everybody knew that.

Now here are two people giving you the straight dope.

McDonough: I think it was a combination of both. I think the decision that we were going to do this, this was imminent, but it helped that we felt we had somebody that would be a good fit. We did not plan on going the interim route, bringing somebody in as a temporary. We thought we had the right guy. I think history now says we do have the right guy and it’s worked out.

Don’t pull a muscle patting yourself on the back there, McD.

I mean, this tells you everything you need to know, doesn’t it? We’re not going the interim route? You wouldn’t hire a guy you’re going to keep around for years on the fly. You would have done your research. This was the plan.

Rick Dudley: There’s a couple things I believe. I believed we all believed Savy could be successful in the National Hockey League. I believe Dale did. I believe all of us believed that.

How’s that working out?

None of this really matters. It worked out. It was the right move. And maybe one day, 10 years from now, we’ll get the real story and a bunch of other real stories about what really went down with this team. It’s just kind of amazing they’re still pushing the super polished version of events.

But hey, when you do what they’ve done, you get tell your story how you want it.