High On The Hog: Visentin, Vinnie and the (Goto)vets 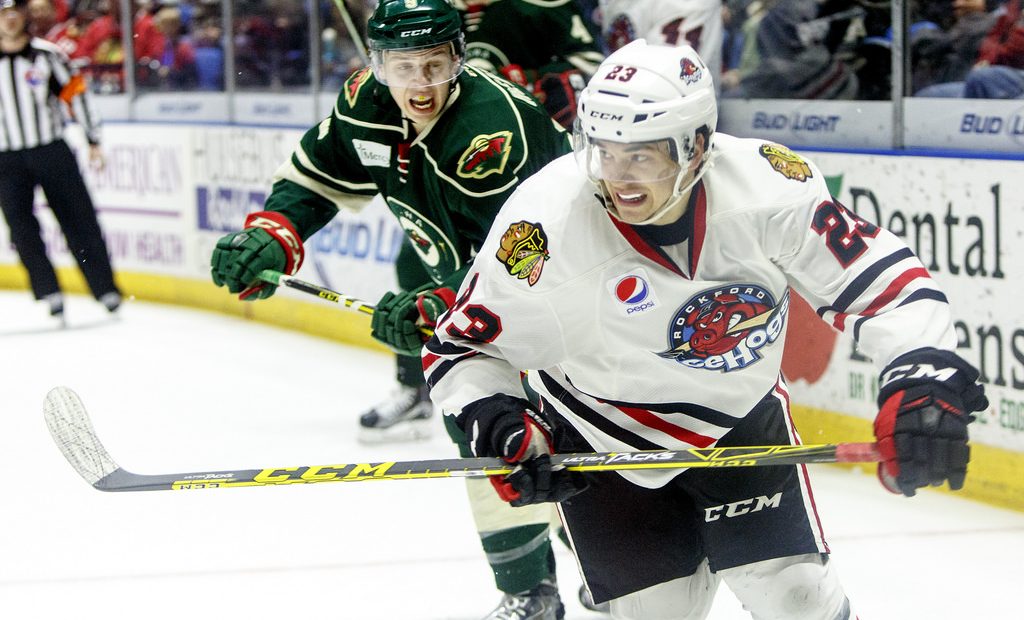 The Rockford IceHogs, AHL affiliate to the Chicago Blackhawks, are nearing the end of an eight-game home stand. The team has continued to pace the Central Division, going 4-1-0-1 in this current stretch and gaining points in each of its past three games.

An otherwise satisfying week was marred with an injury to backup goaltender Mark Visentin, who went down in the first period of Rockford’s game with Iowa Friday night.

The goalie also went down to prevent a shorthanded goal late in the period; it was quickly apparent that he was in distress. It appeared that Visentin may have gotten his skate caught in the netting. In any case, the trainers took the injured Visentin to the locker room. He was not putting any weight on his right leg.

Saturday night, I happened to notice the young netminder making his way to the team box. Visentin was on crutches and had a walking boot on that right leg.

I can’t confirm if that boot is on Visentin’s surgically repaired ankle that kept him out of action all of last season. If it is, it could be a huge setback for a guy who has played well in the bulk of his starts in goal. So far, there isn’t word as to the extent of the injury or how much time Visentin could miss because of it.

In response to Visentin’s injury, the IceHogs recalled Mac Carruth immediately after he led the Indy Fuel to a 2-1 win over the Quad City Mallards. In the interim, Rockford needed an emergency goalie for the remainder of Friday’s game…

Bernie To The Rescue

A check of the AHL transaction wire will show that Hogs General Manager Mark Bernard inked a grizzled veteran net-minder to man the pipes in a worst-case scenario. He was experienced, happened to be in the building and likely came pretty cheap.

Specifically, Bernard signed himself to a PTO.

No word if the 46-year old did any stretching or put on the pads. Bernard, who has ten-plus years of minor-league experience in the crease, wasn’t called into action. Carruth was in town to back up Leighton Saturday night, allowing Bernard to release himself.

You can see Vinnie Hinostroza’s confidence swelling in the weeks following his first pro goal December 18. It took 26 AHL contests for the rookie to remove the lid; since that breakthrough game, he’s become a big part of the Hogs offense.

Hinostroza has seven goals and five helpers in the last 15 games. Now that he’s a scoring threat, the 5’10” forward is part of a pretty effective line with Bryan Bickell and Tanner Kero.

Picking up the game-winner in Rockford’s win over Stockton January 16, Hinostroza then notched his first power play goal against Lake Erie on January 18. For the season, he has seven goals, 13 helpers and is a plus-six in 35 games.

Kirill Gotovets has carved out a spot on this team with his steady play over Hawks draft-picks like Dillon Fournier (on his entry deal), Nick Mattson and Sam Jardine (both on AHL deals). Having limited time with the Hogs in two previous seasons, the unassuming Belarus native has been a steady contributor on the third defensive pairing.

Gotovets is capable of skating the puck out of the defensive zone but the 24-year old former Colgate skater hadn’t scored this season until he tossed in what turned out to be the game-winning goal against Lake Erie in Rockford’s 3-1 afternoon delight with the Monsters.

Having appeared in 40 games for the IceHogs this season, Gotovets is one of three Rockford blueliners (Nolan Valleau and Cameron Schilling being the others) with a goal and ten assists. Gotovets is also a plus-six on the campaign.

Following Monday’s game with Lake Erie, Nick Mattson and Daniel Ciampini were sent down to Indianapolis. The next day, Sam Jardine was recalled to serve as the seventh defenseman. He skated in warm ups but did not play this weekend.

On Thursday, Daniel Paille signed an NHL contract with the Rangers and was released by the IceHogs. Dane Walters was then recalled from Toledo and played Saturday night against Iowa. As previously mentioned, Carruth was recalled Saturday night in the aftermath of Visentin’s injury.

Monday morning, the Blackhawks recalled Mark McNeill, who has been playing center in Rockford for a good portion of the season.

A Look Over One’s Shoulder At The Games Last Week

A rare matinee at the BMO, combined with a rare goal by defenseman Kirill Gotovets, was what 4001 Hogs fans were treated to instead of school or work.

Following a scoreless first period, the IceHogs took a two goal advantage in the sandwich stanza. Vinnie Hinostroza got the home team on the scoreboard with Rockford on the power play.

Rockford lost the initial draw in the Monsters zone but Marko Dano managed to hold in the clearing attempt.  Dano hit Tanner Kero, who touched it back to his teammate at the point.

Dano then slid the puck across the blue line to Viktor Svedberg, who executed the slap-pass to Vinnie Hinostroza entering the slot. Hinostroza one-timed the offering into the cage past a diving Anton Forsberg for a 1-0 Hogs lead at 8:53 of the second period.

The eventual game-winner came with a minute left in the middle frame. Gotovets, who had been held out of the net in his 37 previous games this season, took a pass from Ryan Hartman at the right point. Fighting off a check, he skated to the bottom of the right circle. Firing from a steep angle near the corner, the puck got the best of Forsberg and nestled happily into the back of the bin.

Michael Leighton’s shutout bid was ended on Oliver Bjorkstrand’s goal 12:36 into the third. However, that’s as close as the Lake Erie got. Bryan Bickell fired down ice for an empty net goal in the final minute to put the Monsters to bed.

In order, the game’s three stars were Gotovets, Leighton and Hinostroza.

(No lines for this one; I was fortunate enough to have caught the key bits to this game. Sorry, but occasionally I refuse to live in the past. The Hogs were 1-5 on the power play and did not allow Lake Erie a power play goal in six attempts.)

For the first time this season, the IceHogs took a lead into the third period and did not win. Rockford picked up a point but came out on the short end of an extended shoot out.

The Hogs never trailed in regulation, taking a 1-0 lead on some nice passing in the offensive zone. Ryan Hartman started the play with a pass to Marko Dano behind the Wild net. Dano quickly found Mark McNeill at the right post and Iowa goalie Leland Irving left the cookie jar open. McNeill cued the horn at 6:47 of the opening period.

Colton Beck tied the game up for the Wild at 12:21. but Rockford regained the lead thanks to the speed of rookie forwards Tanner Kero and Vinnie Hinostroza. Nearing the end of an uneffective power play stretch, the two streaked into Iowa territory and ran a sweet give and go sequence. Kero wound up with the open look and beat Irving at the 15:50 mark for a 2-1 Hogs advantage.

Moments later, with Rockford back on the power play, Viktor Svedberg laid out in front of his net to break up a shorthanded rush. Beck missed on the shot but Mark Visentin remained on the ice. After the trainers came out, the goalie had to be helped from the ice. Michael Leighton entered the fray and took the Hogs into the intermission up a goal.

Iowa drew even at 6:01 of the second, with Rod Bordson finding the top right corner of Leighton’s net. Late in the second, the Hogs put together a nice scoring play to go up 3-2.

Hinostroza chased down the clearing attempt of Dennis Robertson into the Iowa zone, beating Zach Palmquist for the puck and sending it into open ice. Kero retrieved the loose rubber and passed to Bryan Bickell, who was open in the slot. Bickell skated to the left post, patiently waited out Irving and hit Hinostroza at the back door to convert on the wide open spaces. The goal came at 18:58 of the period.

With Svedberg in the box for cross-checking, Iowa was able to knot the score once again. After a scramble in front of the Hogs cage, Gustav Olafsson hacked at the loose puck and sent it tumbling off a stick and  over the shoulder of Leighton at 7:35 of the third period.

Both teams had chances to break the tie in regulation as well as in Gus Macker Time. The Hogs also had the game on their sticks twice after Iowa’s Zack Mitchell and McNeill converted in the opening round of the shootout. Kero and Hinostroza had opportunities to win the shootout in rounds three and four. Alas, twas not to be.

Michael Kerenen beat Leighton in the fifth round; Irving stoned Bickell to end the contest. Hinostroza did nab second star honors for his efforts on the evening.

The Hogs used special teams and Michael Leighton’s third shutout of the campaign to get the best of the Wild despite limited offensive chances.

Rockford was unable to get pucks to Iowa goalie Jeremy Smith through the first two periods, so they attempted to get some fists to the faces of the Wild skaters. Mike Liambas and Iowa’s Kurtis Gabriel squared off on their first shift on the ice. Chris DeSousa got into a shoving match with Zach Palmquist seconds later as the fourth line tried to light a fire under the Hogs.

In the second period, Mark McNeill took offense to Marc Hagel running into Leighton and went to battle. McNeill struggled to remove his helmet, which had been pushed askew, before decking Hagel with an uppercut. A couple of minutes later, Ryan Hartman tussled with Brett Sutter and was sent to timeout for five minutes.

While Rockford was out there scrapping, they managed just eleven shots through the first 40 minutes. Leighton had stopped 22 Iowa attempts, but the truth is neither team had a lot of prime scoring chances heading into the second intermission. That was thanks in part to a stout IceHogs PK unit, who performed admirably all evening.

Hartman was awarded a penalty shot 50 seconds into the final period that Smith snuffed out. The stalemate continued, though Rockford began to slowly put together some decent shifts in the Wild zone.

With just 6:15 remaining in the contest, Hartman was given an extreme face wash by Tyler Graovac and the Hogs found themselves with a man advantage for the first time. On this night, one chance was all Rockford would require.

After the first yielded some decent results before the Wild cleared the zone, Marko Dano took a pass from P.C. Labrie at the top of the left circle. Dano had a good look at the net but had the presence of mind to wait for McNeill to come around in front of Smith. Letting fly with the wrist shot, Dano’s offering was guided to the back of the Iowa net via McNeill’s redirect. Rockford led 1-0 at 15:02 of the third period.

The Wild attempted to push back for the equalizer but didn’t have an answer for Leighton, who stopped all 28 shots thrown his way for his 44th career AHL shutout. Leighton and McNeill were named the game’s first and second stars, respectively.

Wednesday night is a big one in terms of the Central Division; Charlotte comes to town having won eight of its last ten. The Checkers are right behind Rockford and defeated the IceHogs in a shootout in the team’s only meeting this season back on October 27.

From there, it’s a Wolves weekend. Chicago visits the BMO Friday night before the teams face off at the Allstate Arena Saturday.