High On The Hog: Snapping With Style 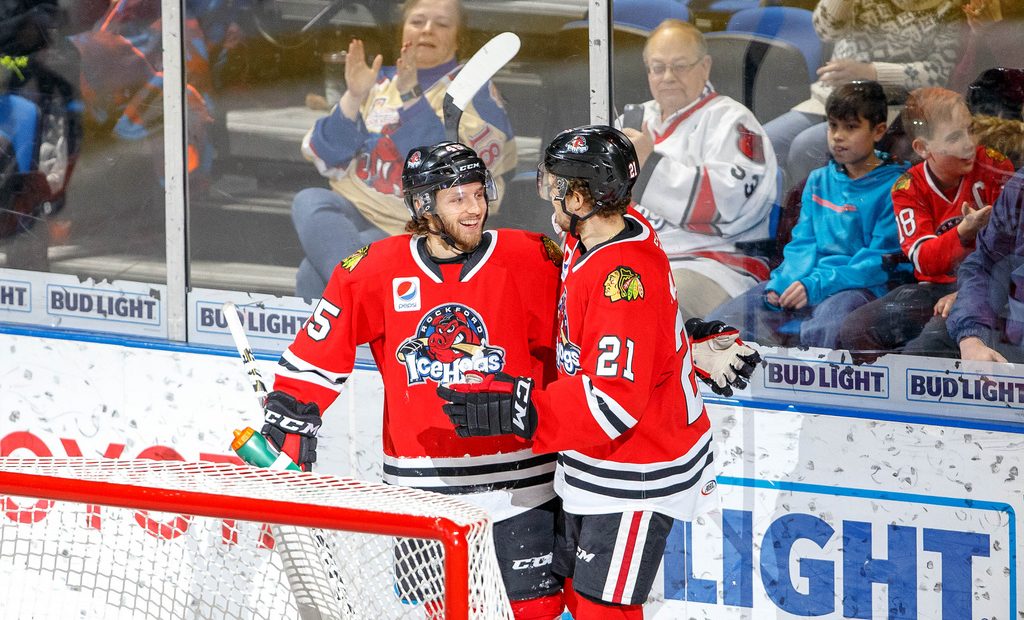 The Rockford IceHogs, AHL affiliate to the Chicago Blackhawks, split a home-and-home with the Central Division-leading Iowa Wild this weekend. The piglets won the back half of the two-game series, exploding for six goals to break a six-game losing skid.

The IceHogs, now 16-15-3-4, remain in sixth place in the Central Division with a .513 points percentage. Rockford is now steeling itself for a Texas road trip that will see the Hogs play in Texas Friday night before games with San Antonio on Saturday and Tuesday.

The IceHogs get a boost in the form of Dylan Sikura and Andreas Martinsen, who were sent to Rockford on Saturday. Both took part in the Hogs 6-2 win over Iowa Sunday.

In Sikura, Rockford gains speed and play-making ability as the organization tries to get him big minutes at the AHL level. Sikura was leading the Hogs in points when he was called up last month and had an assist on a Jacob Nilsson goal Sunday afternoon.

Martinsen, who cleared waivers before being assigned to the IceHogs, spent nearly all of last season with Rockford, putting up 28 points and bringing a very physical element to the mix. The big Norwegian proved to be a productive player in the AHL and should be a key piece for the Hogs moving forward.

Speaking of forwards, Rockford has 15 healthy forwards on the roster. Nick Moutrey, who played Sunday, is nearing the end of his PTO contract. He has two more games left on that agreement, so expect to see some kind of action taken on Moutrey this week.

Viktor Edjsell has now missed nine games with an injury. His return would further crowd the Hogs up front.

Rockford may elect to send a player or two to Indianapolis for a stretch. Matheson Iacopelli, who has been a frequent scratch, went down to the Fuel around this time last season and made a big impact.

Perhaps one of Rockford’s AHL signings, Henrik Samuelsson, Terry Broadhurst, or William Pelletier get sent to the Fuel. Nathan Noel is another prospect that could get minutes in Indy if the team decides there are too many forwards around for now.

In other roster news, Rockford re-assigned defenseman Neil Manning to the ECHL’s Indy Fuel following Sunday’s game. It would seem likely that the team expects to get back Lucas Carlsson and/or Jan Rutta back from injury before the Hogs fly to Texas. If both are ready to return, expect to see D Josh McArdle return to the Fuel late this week.

Minus Manning and McArdle, the Hogs have eight defensemen on the roster. This includes Luc Snuggerud, who was concussed in a game against Iowa on November 3 and has not played since.

A number of players on AHL contracts with Rockford has spent quite a bit of time with the Fuel, who are 18-16 on the season. Indy is in fourth place in the ECHL’s Central Division. Here’s how the season is going for the Rockford signings in Indy.

F Brett Welychka has six goals and nine assists in 19 games with Indy. F Radovan Bondra has four goals and 11 helpers in 28 games, while F Connor Moynihan has five goals and six assists in 24 games.

Goalie Matt Tomkins has been in 26 games for the Fuel. He has a 14-11 record to go with a 3.14 GAA and a .910 save percentage. Tomkins has also been named CCM ECHL Goalie Of The Week on two occasions this season.

The IceHogs were shut out for the fifth time in the 2018-19 season on their way to their sixth-straight defeat.

It was a scoreless standoff until the seventh minute of the third period, when Iowa’s Colton Beck sent a wrister from the top of the right circle past the blocker of Hogs goalie Anton Forsberg. Less than a minute later, Will Bitten knocked in a rebound to make it 2-0 Wild. Iowa added an empty net goal by Justin Kloos with 29 seconds remaining in the contest.

Kaapo Kahkonen stopped 26 Rockford shots to record his fifth shutout of the season. The Wild rookie has blanked the Hogs three times this season. Forsberg recorded 31 saves in taking the loss.

In breaking their six-game losing streak, the IceHogs scored more goals at the BMO Sunday (6) than in the last six games combined (5). Jacob Nilsson led the way with a hat trick as Rockford finally got some pucks in nets.

Colton Beck spoiled an IceHogs power play with a shorthanded goal midway through the first period. Rockford began the offensive charge early in the middle frame.

Andrew Campbell took a pass from Jordan Schroeder at the left circle. Campbell sent a shot to the net that glanced off of the left pad of Wild goalie Andrew Hammond and tumbled into the cage, tying the score 1-1 at the 1:19 mark.

Iowa regained the lead on the power play, with Justin Kloos getting to the backdoor ahead of Hogs starter Kevin Lankinen. The Hogs trailed 2-1 5:33 into the period but would soon take control of the contest.

Schroeder got to a loose puck in neutral ice and sent it off the half boards and into the Wild zone. Nilsson redirected a nifty backhand pass from Sikura past Hammond at 6:04 of the second to even the score at two goals.

On the subsequent faceoff, the IceHogs got control of the puck behind the Iowa net. Henrik Samuelsson hit Anthony Louis in the high slot. His offering was redirected by Luke Johnson to put Rockford up 3-2 at 6:19 of the second period.

In the final period, Rockford put its foot on the pedal. Louis got things started in the sixth minute, taking a stretch pass from Joni Tuulola and skating down the right side on an odd-man rush. Electing to take the shot, Louis went far side on Hammond and made it 4-2 Hogs at 5:43 of the third.

As time began to run out on the Wild, Nilsson picked off a clearing attempt by Iowa’s Carson Souchy inside the Wild blueline. A few strides and a wrist shot later, the puck settled into the netting behind Hammond and Rockford led 5-2 with 5:17 to play. With help from Andreas Martinsen and Louis, Nilsson completed the hat trick with an empty net goal with 2:49 remaining.

Lankinen made 31 saves in picking up the victory for Rockford. Nilsson, Johnson and Louis were named the Three Stars of the game.

Follow me @JonFromi on twitter for game updates, news and analysis on all things Rockford throughout the season.