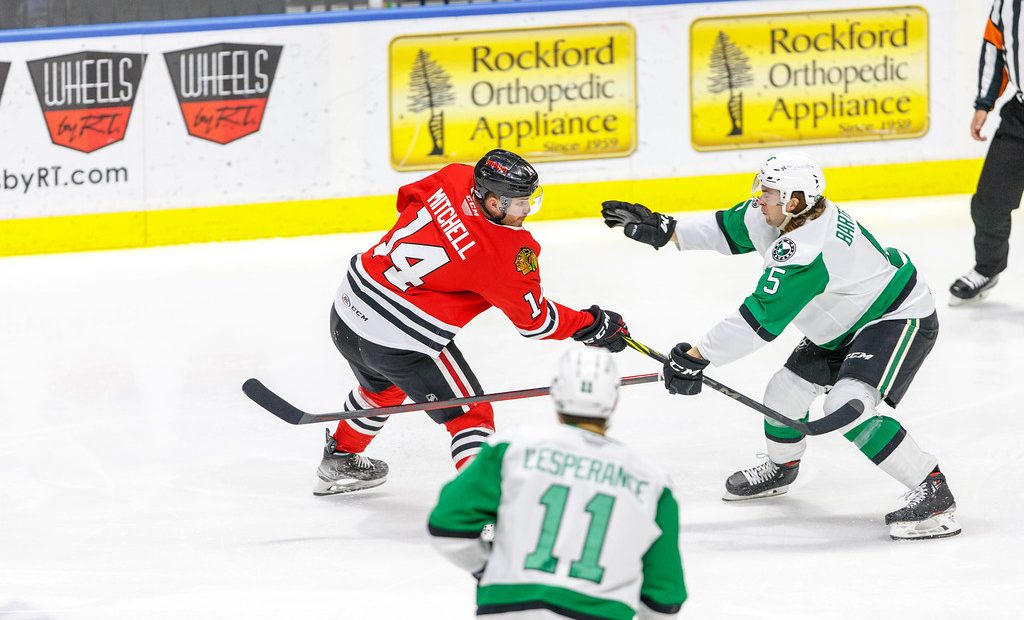 The Rockford IceHogs have extended the time they have to develop some key prospects by qualifying for the 2022 Calder Cup Playoffs. The postseason gets underway Wednesday night at the BMO Harris Bank Center, when the IceHogs play Texas Stars in a best-of-three play-in series.

Rockford is the fourth-seed and will host the fifth-seeded Stars for every game of the series, per the league’s travel guidelines. The winner moves on to face the Central Division champs, the Chicago Wolves in a best-of-five affair.

Here is the postseason forecast for the Piglets as I see it.

First of all, it would not shock me for the IceHogs to knock off any of their Central Division rivals in a playoff series. Even after dropping a 3-2 decision to the Wolves in the regular season finale Saturday night, Rockford finished 8-3-0-1 against Chicago. They have split the season series with Texas and Milwaukee and were 5-3 against Manitoba. The only Central opponent that dominated them (Iowa) is not in the playoffs.

The IceHogs have generated enough offense to be competitive. For the first time in a couple of seasons, Rockford posted a per game average of over three goals this season. The Hogs 3.10 per game clip was their highest since the 2017-18 season, when they reached the Western Conference Final scoring 3.14 goals per contest.

Unlike that veteran-laden group, this year’s group have been grinding out wins for the bulk of the season. A poised and deep blueline, coupled with very capable goaltending, have been the ticket in the past couple of months. This could prove to be a major strength in the postseason.

Or, the youngsters could get bounced in two games by a hot Texas team that won its last four games. Such is the mystery of playoff hockey. Some confidence and a hot goalie can take you far. A slow start could quickly slam the door on a very solid season for Rockford.

On Sunday, the Blackhawks assigned D Nolan Allen and F Colton Dach to the IceHogs following the conclusion of their junior seasons. I wouldn’t expect either to play. Maybe one or both could step in and make a surprise impact. I would avoid holding my breath on it, though.

Chicago could also assign some players like G Collin Delia, D Alex Vlasic to bolster the IceHogs roster. As of Monday, they have not done so. At this point, it looks like Rockford will dance with the players it has leaned on for the last month of action.

Ian Mitchell has been out of the lineup since injuring his right wrist in practice last Tuesday. He would be set to come back late in the week, but is probably out for the opening series. The IceHogs depth at defense makes this a little easier to bear, but Mitchell was voted the team’s top defenseman award for good reason. His return makes the Hogs a bit tougher to play against.

D.J. Busdeker returned from a shoulder injury for the last two games of the season, though Brett Connolly is likely out for the duration of the playoffs with a knee injury.

Cale Morris took the net against the Wolves Saturday and stopped 50 shots in the loss. I would imagine that he will back up Arivd Soderblom, who, along with F Dylan McLaughlin, were selected co-MVPs for Rockford this season.

Under The Microscope: The Texas Stars

Rockford battled the Stars eight times this season. Both teams won four games. The season series concluded way back on February 27, when Texas won 3-2 at the BMO.

The Stars were 9-4-1 in April, while Rockford wound up 9-6. Of all the possible opponents for the piglets to have, Texas is the one who shouldn’t intimidate the Hogs physically.

There are four players who took the ice in the 2018 Western Conference Final contested between these two franchises; all currently reside on the Stars roster. This includes former Hogs forwards Anthony Louis (24 G, 31 A) and Tanner Kero (5 G, 12 A), as well as Texas captain Curtis McKenzie (21 G, 29 A) and Joel L’Esperance (24 G, 25 A).

The x-factor in this series could well lay in the crease. Matthew Murray has been used quite a bit since signing an ATO out of UMass this spring. He split time with second-year goalie Adam Scheel, who was recalled to Dallas on Saturday.

If Murray winds up being the man in net for Texas, he’s coming in hot. Currently, he is sporting a 1.68 GAA and a .947 save percentage in his six AHL starts. Likely to serve as Murray’s backup is LaGrange native Matt Jurusik.

Keys For The IceHogs