High On The Hog: Lights Out On The Pokka Party? 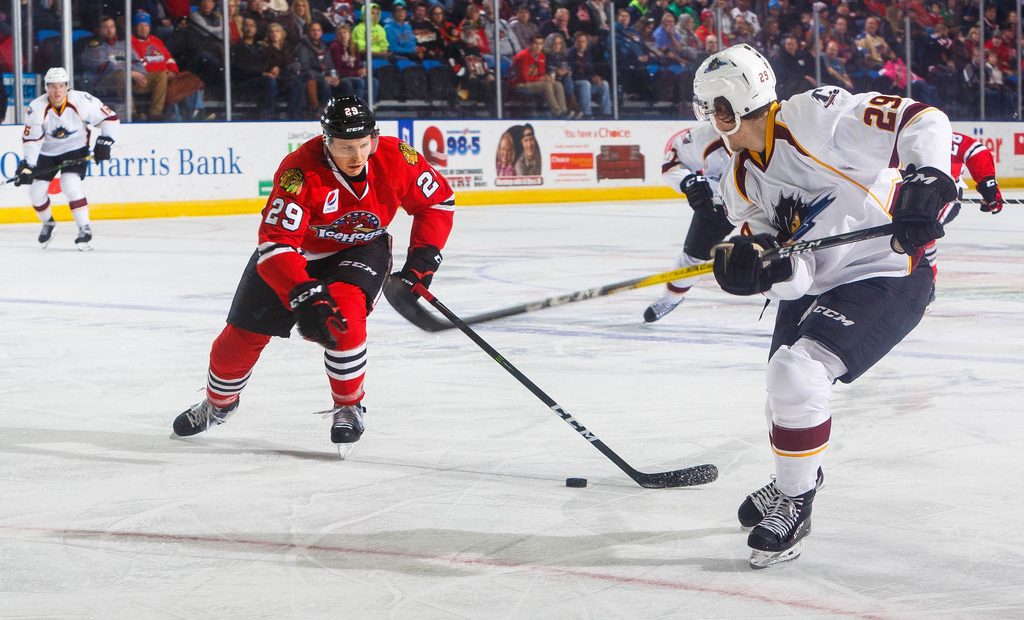 The Rockford IceHogs, AHL affiliate of the Chicago Blackhawks, may see some players departing via trade in the coming weeks. Whether you consider the Hawks buyers or sellers at this stage of the season, it would seem likely that some deals will be make before the February 26 trade deadline.

I’m thinking that one of those moves will involve defenseman Ville Pokka.

With a host of defensemen currently in Rockford, the young Finnish skater has seen himself in what must be an unfamiliar role in his IceHogs tenure. That would be that of a spectator.

In each of the last two seasons, Pokka has played in all 76 regular season contests. He played in the first 41 heading into a January 23 game with Bakersfield. Pokka was scratched that night before returning to action that weekend, which included a game-tying goal in an eventual win over Ontario.

The 23-year-old Pokka was not in uniform for Rockford this weekend. It is possible that he is injured. It also could be writing on the wall that Pokka’s days in the organization are numbered.

I can’t say that Pokka has been Rockford’s best defenseman this season. That said, he certainly hasn’t been bad. He is on his way to what should be his fourth 30-point season for the IceHogs. In Pokka’s four-year pro career in Rockford, he’s been a steady offensive player.

Though Pokka spent some time on Chicago’s roster this season, he did not see any game action for the Blackhawks. As is the case with other prospects, it may have been decided that the organization doesn’t see him as a fit moving forward.

Keep in mind that this is my speculation only, here. Maybe the kid’s hurt. Perhaps the team just wants to give Pokka a mid-season rest. However, it isn’t far-fetched to believe that there are several Hogs (Cody Franson, Gustav Forsling and Adam Clendening, for instance) who would rate call-ups before Pokka at this point.

Pokka has been one of coach Jeremy Colliton’s alternate captains for the bulk of the season. His game has been solid at the AHL level this season. It just may not be enough to get his foot in the door with Chicago. Pokka will definitely be a name to watch when the trade winds begin to blow.

On Thursday, the IceHogs recalled F Nathan Noel from the Indy Fuel of the ECHL. Noel, who has yet to suit up for Rockford, last played for the Fuel December 27.

This may be a case of the Blackhawks, to whom Noel is signed to an entry deal, wanting to have him rehab an injury closer to town. I would assume that if he was healthy Noel would have slotted into the fourth line this weekend. Instead, D Robin Norell continues to get minutes there. We may be waiting a while for Noel to make his Rockford debut.

D Luc Snuggerud made his return to the lineup this weekend after missing nearly two months of action. Goalie J.F. Berube, who has been practicing with the team of late, is still out. Berube has not played since suffering a lower-body injury December 9.

The IceHogs had themselves a rough weekend. A pair of losses dropped the piglets into a tie for fourth with Grand Rapids in the Central Division standings.

After a blowout loss to Manitoba in November, the effort was better but not quite enough to get both points from the visiting Moose.

Manitoba took a 1-0 lead on a Patrice Cormier power play goal. The IceHogs drew even late in the first when Anthony Louis slapped in a loose puck from the left circle past Moose goalie Eric Comrie at 17:44.

Rockford took a 2-1 lead 4:04 into the second period when Tyler Sikura put back a rebound of a Andreas Martinsen shot. Manitoba made it a 2-2 contest when Jan Kostalek got one past Hogs goalie Colin Delia at the 15:18 mark.

Midway through the third, some rapid-fire passing by the Manitoba power play resulted in a wide-open net for Brendan Lemieux to find the top shelf from the slot. Rockford now needed another rally. It got one by the skin of its teeth.

As it appeared that the Hogs would yank Delia for an extra skater, Luke Johnson brought the puck into Manitoba territory and got off a shot from the right circle. The puck squirted past Comrie and slid in tortoise-like fashion across the goal line to knot the game 3-3 with 1:58 remaining in regulation.

Tanner Kero, who had been denied in two breakaway opportunities earlier in the evening, had the game on his stick in Gus Macker Time. Alas, his attempt was snuffed out by Comrie. As so often happens in these affairs, this led to a rush the other way. Nic Petan fired past Delia and the game was over.

Delia faced 50 shots on the night, stopping 46 of them to pick up third star honors.

Things got ugly in the middle frame as four of eight Wolves shots found the back of the Hogs net, turning a 2-1 Rockford advantage into a blowout.

Chicago scored first, with Kevin Lough finishing an odd-man rush with a puck off the crossbar and into the net 8:02 into the game. Before the sands ran out on the first period, however, the IceHogs had gained the lead.

Paul Thompson was bringing the puck along the right boards in the Rockford zone when Alexandre Fortin made the steal. Fortin hit Tyler Sikura coming across the blueline and Sikura did the rest. Skating into Chicago territory, his shot attempt got under the pads of Wolves goalie Kasimir Kaskisuo. At 16:21, the game was tied at a goal apiece.

Two minutes later, William Pelletier caught up to a loose puck and made a nifty move to the Chicago net. Kaskisuo made the pad save, but Anthony Louis was on hand to shoot over the prone Wolves goalie, giving Rockford a 2-1 lead that they took into the locker room.

A Luke Johnson high-sticking double-minor gave the Wolves the chance to expose the IceHogs penalty kill. Brett Sterling connected with twine at 2:03 of the second period to tie the game 2-2.

From there, things got a little out of hand. Moments later, T.J. Tynan and Bryce Gervais worked a 2-on-1 to perfection, with Gervais besting Delia to put Chicago up 3-2 at the 2:59 mark. Shortly thereafter, a defensive turnover wound up in the back of Delia’s net, courtesy of Tyler Wong.

Late in the second, Jake Bischoff capped another successful Wolves power play, lighting the lamp from the point for a 5-2 Chicago lead. Delia, who allowed five goals on just 12 shots, gave way to Matt Tomkins when the teams came out for the final frame.

Early in the third, Adam Clendening lost the handle on the puck just inside the Wolves blueline. Mackenzie MacEachern took the gift, beating Tomkins on the breakaway to make it 6-2 Chicago. Minutes later, a re-direct by Teemu Pulkkinen gave the Wolves a 7-2 lead.

Rockford did get goals from Cody Franson and Andreas Martinsen in the extended garbage time that followed. The Wolves, however, won their 12th straight game at Allstate Arena with little difficulty.

The Hogs welcome San Antonio to the BMO Harris Bank Center on Wednesday night before spending the weekend with two familiar division opponents.

Rockford has yet to defeat the Rampage. In fact, they have been outscored 12-2 in three contests with San Antonio this season.

Friday, the IceHogs host Milwaukee, against whom they are 2-3-0-1 in 2017-18. The Admirals, who are 3-0 at the BMO this season, recently picked up former Rockford forward Mark McNeill, by the way.

Saturday night, its off to Des Moines and another tilt with the Iowa Wild. Iowa is third in the Central behind Manitoba and the surging Wolves. The Wild are also playing well, having won seven of their last ten games.