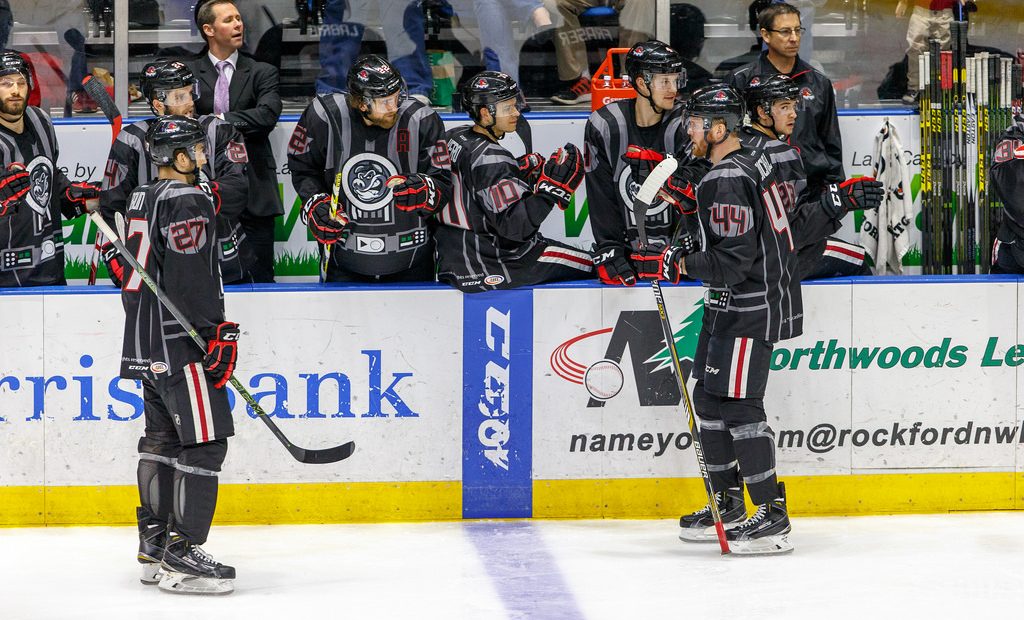 Dent could ice a group with a decent amount of NHL experience when all is said and done. Viktor Svedberg has been up with the Blackhawks a couple of times this season. Kyle Cumiskey, recently returned from knee surgery, adds experience to the Hogs defensive corps.

Rundblad, who made his Rockford debut Sunday afternoon against Charlotte, is eligible for the AHL playoffs. He also adds another right-handed shot to go with Ville Pokka and Jonathan Carlsson, who’s on a PTO with the IceHogs.

Jay Harrison would be a large, stay-at home defenseman with NHL experience if and when he is healthy enough to enter the lineup. Harrison hasn’t played since coming over from Winnipeg with Matt Fraser and Andrew Ladd at the trade deadline.

It appears that Dent is going to use this current situation to get guys a little rest down the stretch. This week, he sat Cameron Schilling for a couple of games. Kirill Gotovets sat out the weekend’s action. Nolan Valleau and Cumiskey also spent time in street clothes this week.

Right now, Dent will have the luxury of rotating players on defense to keep legs fresh and to try out possible combinations for the playoffs.

The Mac(Intyre) Daddy And The Daddy Mac (Carruth)

Michael Leighton was the recipient of a pregame ceremony Saturday night to honor his AHL-record 46th shutout. What was odd about that ceremony was that Leighton was in street clothes for it.

With Corey Crawford out for a few games, Leighton was recalled by the Blackhawks Thursday. Coming up from Indianapolis to back up Drew MacIntyre was Mac Carruth. This may or may not be the tandem that closes out the season for the IceHogs, but both goalies were instrumental in Rockford’s two victories.

MacIntyre shut out his former team, the Charlotte Checkers, Tuesday night in a 1-0 IceHogs win. He struggled a bit in two losses to Chicago, particularly on Saturday night in Rockford’s 4-3 overtime loss. However, he’s posted a 1.97 goals against average and a .933 save percentage in five appearances with the Hogs.

Carruth has been a hard luck loser a couple of times this season. He was, however, excellent Sunday afternoon, stopping 33 shots in regulation and Gus Macker Time. Carruth then denied the net to 11 of 13 shooters to guide Rockford to a 2-1 win over Charlotte.

We may have seen the last of Mark Visentin for the season; there hasn’t been any definite word as to a return. Rockford has depended on strong play in net thus far. The Hogs will certainly need it to go anywhere in the postseason.

Recaps From An Active Week On The Farm

After suffering a pair of losses the previous weekend in Charlotte, the Hogs bested the Checkers at the BMO. A lone third-period goal was all the scoring in this weeknight contest.

That goal came midway through the final period after Rockford spent most of its time killing penalties up until that point in the third. The Checkers were nailed for too-many-men (for the third time that night). The IceHogs made good of their man advantage.

Mark McNeill was in an opportune spot in front of the Charlotte net, collecting a rebound of Ville Pokka’s attempt from the point. McNeill could have driven the Hamboni through the opening left by Checkers goalie Daniel Altshuller. Instead, he merely guided the puck into that opening. This cued the horn and provide the winning margin at 10:48 of the third.

The Hogs PK unit stopped Charlotte on all seven of its power play chances in what turned out to be a rough and tumble affair. Bryan Bickell, Mike Liambas and Chris DeSousa all were tapped for bouts with Checkers opponents. As I predicted to my 12-year-old minutes into the contest, Liambas and former IceHogs forward Kyle Hagel dropped ’em the first shift they had together in the opening period.

Drew MacIntyre wasn’t called upon to make a lot of acrobatic stops, but turned away all 30 of the Checkers offerings on net to pick up the win. He was the game’s first star, followed by McNeill.

The Wolves scored twice in the first to gain an advantage they would never lose. Rockford dropped the Chicago half of a home and home with its biggest rival.

Evan Trupp capitalized on a friendly bounce off the glass behind Drew MacIntyre early in the game. Trupp five-holed the Hogs goalie for a 1-0 Chicago lead at the 2:40 mark.

A defensive zone turnover by Rockford allowed the Wolves to go up 2-0 on a goal by Ivan Barbashev. This, despite the Hogs getting 15 shots on Jordan Binnington inthe opening 20 minutes.

Danny Kristo picked the pocket of Kirill Gotovets and put the Wolves up 3-0 early in the third period. The IceHogs finally scored on a Ville Pokka slap shot with 3:05 remaining in the game, but Trupp potted an empty netter to close out the scoring.

The IceHogs dropped an overtime decision to the Wolves for the third time this season. They did pick up a point while rallying from a goal down on three occasions.

Chicago gained a 1-0 lead midway through the game on a goal by Emerson Clark. The Hogs broke Jordan Binnington’s hold on the goal mouth late in the second period.

The scoring play got started on a miss-fire by Jonathan Carlsson from the point. P. C. Labrie was able to catch up with the puck and find Vinnie Hinostroza at the left post. The beneficiary of some good puck luck, the rookie’s attempt struck Ty Rattie’s skate and tumbled into the net behind Binnington. Time of the goal was 18:32 and the teams skated to the dressing rooms Even-Steven.

Rockford goalie Drew MacIntyre gave up a real softie 25 seconds into the final frame when Jordan Schmaltz snuck a shot under his pads. However, Hinostroza helped provide another equalizer on the power play a few minutes later.

Ville Pokka tossed an attempt off the end boards that Hinostroza caught up with before it could leave the offensive zone. Weaving down the slot, he drew defenders close before dishing to Mark McNeill at the bottom of the left circle. McNeill went top-shelf on Binnington to tie the game at two goals 2:56 into the third.

Chicago regained the lead at the 6:32 mark and held that advantage until the final seconds. With MacIntyre on the bench, the IceHogs put on a last bid at a final comeback.

It appeared that the Wolves had gained control of the puck and were about to clear the zone for a regulation win. However, Viktor Svedberg got a stick on the clearing attempt to keep hope alive. Ryan Hartman hit Bryan Bickell at the right post, leading to the veteran slipping a backhander between Binnington’s pads with nine seconds remaining.

Gus Macker Time was not kind to the Hogs. Less than a minute into the proceedings, Danny Kristo fired a wrister from the top of the left circle. MacIntyre, despite getting a real good look at it, whiffed with the glove save and the Wolves picked up the third point.

Ryan Hartman was on the starting unit for the opening faceoff in place of Ryan Haggerty.

It took 13 rounds, but Rockford ended the weekend trifecta with a victory and in Darth Vader sweaters, no less (it was Star Wars night). Mac Carruth stopped 33 of 34 shots before turning away 11 of the 13 Checkers shooters at the BMO Harris Death Star.

After a scoreless first period, the IceHogs got a goal early in the middle frame. Jake Dowell chased down a loose puck in the left corner of the Charlotte zone and centered to Bryan Bickell. Bickell one-timed the offering past John Muse and into the hungry Sarlacc that was the Checkers net at 2:25 of the period.

The Checkers tied the game in the final minute of the second period and Muse and Carruth kept the nets empty for the next 25 minutes of action. The shootout was tied 2-2 after the initial three rounds, after which the two goalies snuffed out 16 attempts between them.

Matt Fraser finally bested Muse before Carruth used The Force (along with his glove) to stone Patrick Brown to end the contest. Carruth, Muse and Bickell were named first, second and third stars, respectively.

Rockford currently sits in third place in the Central Division behind Grand Rapids (winners of 13 straight until Sunday’s loss to San Antonio) and Milwaukee. The race is tight going into two games with Lake Erie this week.

The Hogs have two road tilts with the Monsters, who would love to close the gap between the two teams, Thursday and Friday.