High On The Hog: A Season In Review 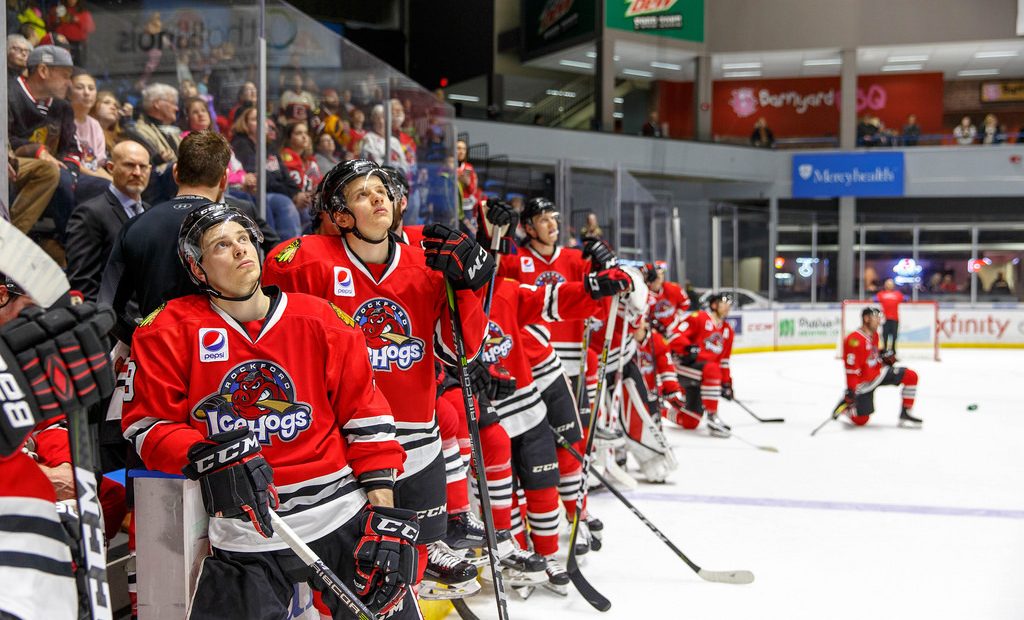 The Rockford IceHogs had themselves one heck of a playoff run to cap the 2017-18 season. They came up a bit short of hoisting a Calder Cup, but still wound up as one of the last four teams standing in the AHL’s postseason tournament.

The piglets were eliminated by Texas in six games in the Western Conference Final, but showed the high level of compete that marked this year’s club. Three of Rockford’s four losses, including Game Six May 28, came via overtime. The Hogs did themselves proud by taking the franchise into previously unexplored territory.

After a dismal showing last season, Rockford cleaned house, installing a new coach and overhauling the roster. The result was a team that finished fifteen games better than the 2016-17 edition of the IceHogs, then ripped through the first two rounds of the Calder Cup Playoffs.

Stick taps for a successful season, perhaps? You could make that assumption. However, that’s not what I’m driving at. What I’m doing here is tapping on the brakes.

Don’t get me wrong; this was a special season and was a huge breath of fresh air after the calamity of a season ago. There’s truly a lot to be excited about. Several young prospects had promising results in 2017-18. That said, the Hawks organization seemed to learn a lesson regarding the construction of the minor-league roster.

Or, maybe the organization’s hand was guided by Chicago missing out on the playoffs. Either way, the fans in Rockford saw things go down differently than it did in 2016-17.

Remember in The Lion King where Mufasa claws his way up the canyon wall, only to be nudged to his death by Scar in one of the classic jerk moves of the animated medium? That will do nicely…but imagine this…

What if, instead of Mufasa, Simba manages to approach the crest of the canyon wall. What if Scar not only offers his help in securing safe ground for his nephew, but buys him a caribou popsicle and generally provides valuable support to the growing cub?

Well, Hawks GM Stan Bowman is Scar in the above scenarios. Change out Simba for the ‘Bago Flying Piglets of 2017-18. Last season’s Hogs were no Mufasa; a better analogy would be if one of the crazy hyenas had scratched its way up the ridge.

Bowman scuttled the ship (one that was undermanned to begin with, but I digress) in late February of 2017, trading away the team’s top scorers. This past season, he bolstered the roster with some veteran additions. Did it make a difference? Yup.

Here’s how the final 20 games of the season went for those two clubs:

Colliton impressed me with his handling of a baby-faced roster throughout the season. However, if he had been dealt last year’s hand, could he have guided that group to a playoff berth?

Bowman set Colliton up with a bevy of first and second-year players out of training camp. Colliton stressed a fast-paced attack and saw his team go through its ups and downs, all the while showing a knack for playing hard to the final buzzer. He did a fine job with a very young club.

What was sorely needed, as I pointed out when the team began play this season, was experience. From this year’s season preview:

Andreas Martinsen, who came to town via a trade with Montreal, was the guy who filled that role for most of the season, though it was evident that a few more skaters of his experience would really help the IceHogs.

Tootoo was eventually waived but never appeared in a game. Bouma, while not showing up much on the scoreboard in the playoffs, was a key contributor once he was waived and assigned to the AHL.

Rockford was 26-23-3-3 following a 6-3 loss to Wilkes-Barre/Scranton on February 23. Injecting a veteran presence into the Hogs roster was the converse of Bowman’s deadline plan the year before, with dramatic results.

Here’s a question I posed in that season preview back in October:

It took until late February, but Bowman added not one, but three players to boost the offensive punch. Franson (reassigned from Chicago) and Clendening (obtained for Laurent Dauphin) completely changed the power play, which struggled mightily up to that point in the season.

The addition of DiDominico turned out to be the biggest move of them all. When Ville Pokka was traded to Ottawa for the veteran forward, it didn’t seem to be the kind of move that transformed a season. I wasn’t sure what DiDomenico would be able to bring to Rockford.

What he brought was a healthy dose of red-ass that had been lacking on the roster. He also went on a scoring binge I never saw coming; 23 points (8 G, 15 A) in 22 games in the regular season, then 18 more (7 G, 11 A) in 13 postseason games. I can’t overstate how the additions of DiDomenico, Franson and Clendening changed the Hogs for the better.

There are really two teams to analyze here; the band of youngsters that went through the first five months of the season and the veteran-led squad that finished the last three months in dominating fashion. Colliton proved to have the savvy to effectively helm both incarnations (though he never got around to naming an official captain).

There is much to like about the former; Highmore’s outstanding rookie season and Delia taking advantage of injuries in the system and completely turning his season around. Louis paced the team in points during the regular season.

Rockford’s AHL signees made an impact not previously seen. Tyler Sikura was the team’s MVP and William Pelletier’s non-stop motor was tailor-made for Colliton’s style of play. Darren Raddysh stayed in the lineup for the bulk of 2017-18. Like Sikura, Raddysh earned an NHL entry deal for the effort (Pelletier’s AHL contract was extended through the 2018-19 season as well).

Upon the arrival of the aforementioned veterans, NHL players like John Hayden and David Kampf along with Swedish prospect Victor Ejdsell, the depth chart deepened significantly. Top-six skaters earlier in the schedule were filling out the third and fourth lines by the end of the season.

As a franchise, the IceHogs front office has to be doing cartwheels. After a drop of almost 1,200 fans a night over two seasons, fans made the pilgrimage to the BMO Harris Bank Center to support the Hogs during the playoffs. You would have to think that this exciting season of action is going to boost ticket sales in 2018-19.

So far as prospects, I’d say that the season was promising, though the real proof of prospect development will come this fall when most of the catalysts of the postseason run will be elsewhere. A lot of folks who caught Hogs fever the last couple of months may be salivating at what could be next season, but the team we saw down the stretch is not the team we will see come October.

Players like Luke Johnson and Viktor Svedverg made great strides in their games and were key contributors throughout the campaign. There are a lot of sophomore seasons (Alexandre Fortin, Luke Snuggerud, Graham Knott, Matheson Iacopelli) that will weigh heavily in terms of Rockford’s fortunes in 2018-19.

I will start plowing though the 89 games that comprise the piglets journey this week. I’ll be back with the tale of the tape in several installments, starting with the goalie situation as it is currently comprised.