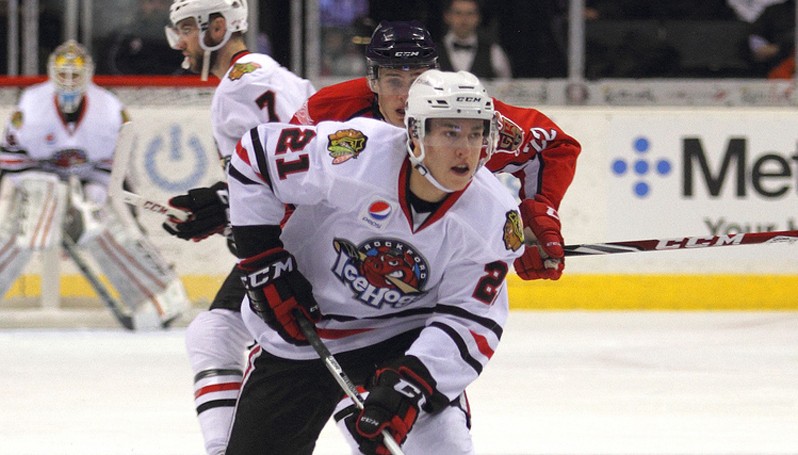 Opposing AHL net minders have to go into games with the Rockford IceHogs ready to face a parade of vulcanized rubber. The Midwest Division leaders IceHogs haven’t had any problems getting the puck to the net this season.

The Hogs, who won two road games in this past week of action, keep goalies busy to the tune of 33.92 shots per contest. That is tops in the AHL. Rockford is averaging double-digit shots in each regulation period this season.

In wins over division rivals Grand Rapids and Chicago, the IceHogs quickly tilted the rink to the offensive zone. Rockford had 25 shots in the opening 20 minutes on New Year’s Eve, equaling the AHL high in shots for a period that they share with… themselves. The IceHogs also had 25 shots in the third period back on December 16 against Iowa.

Unfortunately for the Hogs, peppering the opposing net early hasn’t always resulted in big early leads. Rockford trailed early against the Griffins and went into the first intermission tied with the Wolves. Though they lead the league in first-period shots (405), they are tied for 28th in the AHL with 22 first-period goals. They have also given up 22 first-period goals.

After one period of action, Rockford has led ten games, trailed in another ten and been tied 16 times. The IceHogs have drawn first blood in 19 games, just over half of their 36 games played.

Rockford has gotten more dominant on the scoreboard as games have progressed. They have outscored their opponents 38-33 in the second period and 38-23 in the third.

Could you say that the Hogs have worn down the man in net with the offensive pressure? Rockford’s shot percentage nearly doubles from the first period (5.4) to the third (10.4). Either goalies are getting sick of the barrage of pucks or the IceHogs take better aim.

Ross Back In Action At Opportune Time

Garret Ross, injured December 16 in Iowa, made his return to the lineup Saturday night in Chicago. Starting the contest with Peter Regin and Mark McNeill, Ross’s return is a welcome one indeed.

With Teuvo Teravainen recalled to the Blackhawks, it was a great time for Rockford to get back one of its top goal-scorers. Ross, who led the team in goals at the time of his injury, was still tops on the team with 11 goals at the start of Satuday’s game. McNeill drew even with his line mate in the second period before Ross took sole possession of the team lead with an empty net tally.

Defenseman Stephen Johns was on the shelf for another week of action with a concussion suffered November 26. With Johns out indefinitely, Teravainen up with the Hawks and Alex Broadhurst out until spring at best with a broken arm, Rockford has just one extra forward and one extra defenseman on the roster right now. That doesn’t figure to be an issue, however; I wouldn’t look for the IceHogs to add any players at the moment.

A Look Back At The Two Road Victories

It was a wild night in Grand Rapids. The Hogs came out firing, putting 25 shots on goal in the first period but was behind 1-0 after 20 minutes.

Teemu Pulkkinen came down the right side and scored on Michael Leighton 34 seconds into the game. Griffins goalie Jared Coreau did the rest as Rockford dominated the rest of the period but could not score.

Grand Rapids added a second goal when Pulkkinen set up Andy Miele 4:23 into the second period. Back came Rockford, who tied the game midway through the game.

Matt Carey was the beneficiary of sweet passing by T.J. Brennan and Ryan Hartman, lighting the lamp from the slot on the power play. Less than two minutes later, it was Hartman’s turn. Brennan sent a laser toward the right post and Hartman was there to knock it past Coreau.

The IceHogs outshot Grand Rapids 48-25 in regulation. In overtime, it was Leighton’s turn to stand on his head. The veteran net minder withstood eight Griffins shots in the extra time, including a couple of breakaways. The last came with just seconds remaining.

The shootout was decided by Peter Regin, Rockford’s last shooter, who slipped a backhand past Coreau to send the Hogs home winners.

Michael Leighton stopped 31 Wolves shots for his third shutout of the season. The IceHogs took it to Chicago in the first two periods, taking control of the contest with a pair of second period goals.

After a fast-paced opening 20 that saw the Hogs dominate puck possession but held out of the net by Wolves goalie Matt Climie, Rockford struck early in the middle frame. Mark McNeill took the puck from Adam Clendening behind the IceHogs net and took it on a coast-to-coast journey. The excursion ended when McNeill sent a shot off of Mathieu Brodeur and into the Chicago net. This gave Rockford a 1-0 lead 36 seconds into the period.

The Hogs ended the second period with another tally. This one came at the 18:40 mark and was created by Phillip Danault, who took a pass from Ryan Hartman and wove his way to the crease. After a scramble for the loose puck in front of Climie, Klas Dahlbeck scooped a backhand into the net to put Rockford up 2-0.

The Wolves were the aggressors in the third period but Rockford killed off a couple of Chicago power plays and withstood 18 shots. Climie was pulled with 1:20 remaining, but the IceHogs kept the Wolves from putting together a serious scoring chance. McNeill picked up a loose puck and hit Garret Ross, returning from an injury that kept him out of the lineup for a couple of weeks, for an empty netter to sew things up.

The Hogs have just two games this week, both with the Milwaukee Admirals. The teams face off in Milwaukee Thursday night before meeting in Rockford Friday night.