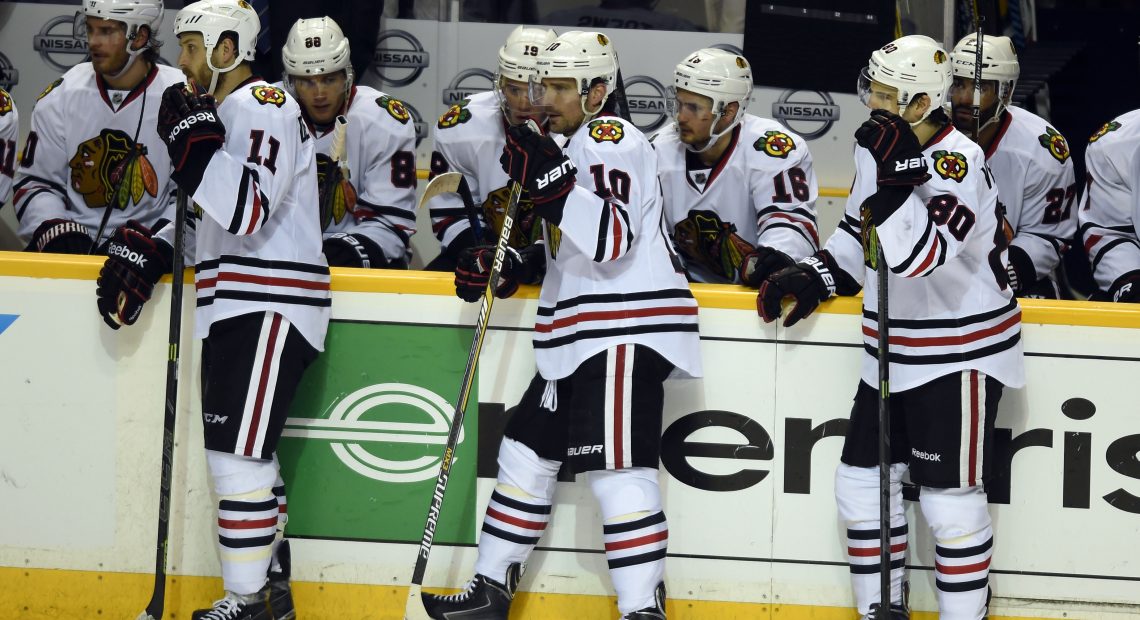 Well, it sure sounded like it could be a fun day/night for Chicago sports in theory. The reality, though, was far from it. The Bulls were able to win in double overtime; the Cubs blew a late lead and the Sox were looking to set series momentum of their own with a bench clearing brawl, which ended up in an extra innings loss.

And then your Blackhawks. You can say this, it was a decent 40 minutes on the road. Then the 3rd period started.

–In that 3rd period, the James Neal goal was just goofy. It seemed like the Hawks had it pretty well covered. I hate to throw the term lazy or lackadaisical on Duncan Keith or Marcus Kruger. Keith had the far post covered and Kruger was right behind him taking away any passing lane. Neal, to his credit, jammed the puck off Keith’s skate and into the net.

When we talk about puck luck or getting a bounce, this is a prime example. 98% of the time, the Hawks keep that puck out of their net. For whatever reason, Neal got enough of the puck to muscle it past Keith.

Could Keith have positioned his stick better? Maybe. But he’s been successful in the past making the exact same play so….it’s hard to expect he would do anything different.

–Nashville’s 3rd goal was set up by a pretty terrible Michal Rozsival penalty. Then the Hawks PK gave Colin Wilson enough time to explain the invasion of Poland and he scored one of the easier goals of his career.

I get why Hjalmarsson played the pass in that situation given the Predators propensity to look for the backdoor pass in Game 1…but the Hawks have to make it more difficult there. Keith has to close down the passing lane to get Wilson the puck. The Hawks have to collapse on to Wilson when he makes that spin move. That goal was way too damn easy and quite frankly, they’re lucky that’s the only time it has worked so far in this series because it’s been there every damn time.

–In professional hockey, the use of your one timeout is generally very obvious. Whether it’s after an icing, the opposition potting a few quick goals or to draw up a play late in the game, the situation almost always screams “USE YOUR TIMEOUT.”

Tonight, after the Predators made it 3-1 less than 4 minutes into the third, it certainly seemed like the ideal situation for Joel Quenneville to call his timeout, settle everything down, let his team catch their collective breath and use the final 16 minutes to try and claw back into the game.

Instead, he fell asleep at the wheel, let play continue and the Predators scored another 12 seconds after that. You can lay blame at whoever lost their man on the play but that one could have probably been easily prevented if the game was slowed down with a timeout. Making matters worse, he didn’t even use his timeout after that goal.

It really came back to bite the Hawks when they cut the lead to 4-2 with 5 minutes to play. In a situation where they could’ve been chasing one goal, it was two.

Ultimately, there are a lot of hypotheticals here but my point is, it’s easy to recognize when a coach should use his timeout and Joel Quenneville failed to realize it tonight.

–The good news is the last time the Hawks failed to drop the sword on an opponent when they had a chance, they made them pay when they went to Vancouver and beat them 6-1 in 2010. Also good news, as we have seen, is that Nashville is a different team outside of Bridgestone.

The bad news is they only need to put together one strong road game to bring this series to a coin flip.

The Hawks, as usual, have said all the right things after this loss. Winning Game 6 won’t be easy; it may not be fun but it will be a whole helluva lot better than another Game 7.