The Hawks begin a stretch of four of five games at home before they head out west for the Circus Trip, and four of the five opponents (not the Lightning) are pretty much fighting it at the moment. If the Hawks are going to have something of a surge before the trip, which they usually play pretty well on, there would be no better time than now.

It begins tonight with the visit of the now Barry Trotz-led Washington Capitals, who face-plant their way into the United Center on the back of a five-game winless streak. It’s not all that hard to pinpoint what’s been the problem for the Caps, as Braden Holtby has been simply terrible. He’s not facing that many shots per night, yet hee’s given up 12 goals in his last three starts, all while not seeing more than 28 shots in any of them. Backup Justin Peters hasn’t been any better, and thus you get what we’ve got here. Shouldn’t expect this to continue for Holtby, who has been pretty good for the Caps behind complete overturned semis of a defense before.

Maybe that’s the problem. He’s used to getting pelted with pucks and Trotz’s defensive system leaves him bored, cold, and feeling alone. The Caps give up the second least amount of shots per game, so it didn’t take long for Trotz to bring over some of his tendencies from Nashville. Eventually, this will result in more wins than losses for the Caps, you’d have to assume.

While the shine of the go-go Caps under Bruce Boudreau still makes some people think this is a dynamic offensive unit, the truth is it really isn’t. There’s Backstrom and Ovechkin, making for as dangerous of a top line as anywhere in the league. Beyond that? Not much. There’s some useful wingers in Troy Brouwer or Marcus Johansson (who has moved to wing for Evgeny Kuznetsov). There’s a couple pluggers in Joel Ward and Eric Fehr and the like. But really, the Caps’ forward depth hinges on the development of Kuznetsov and Andre Burakovsky, 20 and 19 respectively. Beyond that, there just isn’t a whole lot, despite what we remember from a few years ago.

We also think of the Caps as Pompeii in its current form on the blue line, but that’s not necessarily true either. Yes, the Brooks Orpik signing is kind of hilarious but combined with Matt Niskanen, who is overpaid but still very useful, has really made this a unit with depth. I’m not sure there’s a #1 pairing here, just three solid ones. Karl Alzner, John Carlson have always been better then they got credit for trying to put out all the fires their previous coaches and systems caused. Mike Green can barely stay on the ice, but when he does he drives possession just as well as anyone from the back and is nearly a point-per-game this season. And it’s not like Trotz hasn’t wrung offense from skilled d-men before (Weber, Suter, Hamhuis, Ellis, etc.)

For the Hawks, tonight begins Patrick Sharp’s absence, which is now being filled by Peter Regin. This would be better if they let Regin play his natural center and moved Andrew Shaw to a wing on any line, but this is yelling at the rain again. Regin will play on the left side of Richards and Morin, at least that’s how it looked in practice yesterday. Regin had been playing win in Rockford, withe Teuvo a lot, so maybe it’ll look a little better than it did last year.

Corey Crawford will start, and with no back-to-backs until Western Canada, you’d imagine Crow is going to gobble up every start from here until then.

It’s a Trotz team, on the road, so even though it’s not the Predators you can bet it’s going to look a lot like it. The Caps will sit on the Hawks wingers on the boards when they’re trying to break out, with a forward patrolling the middle and a d-man hanging back in the neutral zone. If the Hawks can make the first pass, those two Caps sitting on the boards and that second forward can easily slink back into the neutral zone to make it a Chicago construction site to get through. If the Hawks foul up that first pass then those two Caps sitting on the boards will pinch down and make things a mess on the wall. It’s all about waiting for Hawks’ mistakes, and if they’re as sloppy as they were against Winnipeg and not as tight as they were against Montreal, there’s going to be plenty of kibble for the Caps.

Another slog with Trotz. Oh joy. 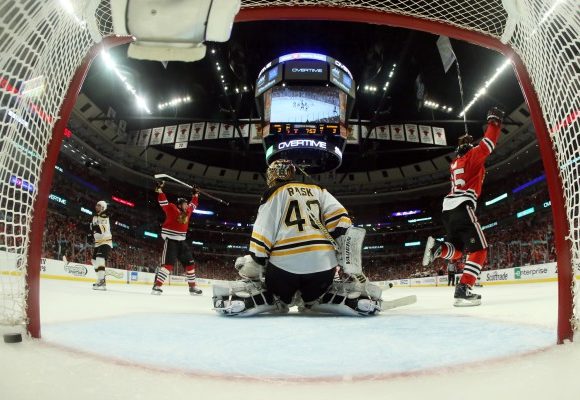