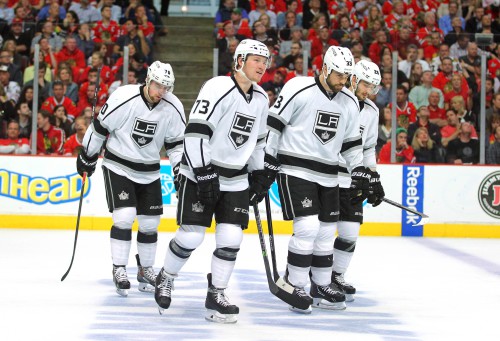 Well that was a weird one. I’m trying to think of another playoff game that the Hawks had in their pocket so clearly and then just let it slip out in such fashion. Game 3 and 4 against Detroit last year, especially Game 4, weren’t as bad as they looked. But they don’t measure up. Game 2 against Boston last year where the Hawks absolutely horsed the Bruins in the 1st period but only emerged with a one-goal lead came to mind. But the Hawks watched that one get turned over on them from the start of the 2nd on. Can’t really come up with one.

Still, as good as the Hawks were for the first 38 minutes–and it may be as good as they’ve been this entire spring–two goals is still in that bloop-and-a-blast range. Well, the Kings got two bloops and two blasts, and the Hawks find themselves tied in a series they really should have by the balls. Part of the reason they don’t is the stubborn and insipid decisions their coach keeps on making.

-Some people will point to Quick’s save on Seabrook as the turning point of the game, and in some ways that’s justified. But this isn’t soccer where every scoring chance is sacred. Each team gets at least a handful. Seabrook did just about everything he could with that saucer pass and got it off the ice. Quick beat him. It’ll happen again. It shouldn’t have signaled a collapse. And yet you were worried after it, weren’t you?

-So you have this two-goal lead, and late in the 2nd the first thing that should be priority is getting out of the period right there. Yeah well…

A dump into the corner, and Seabrook gets ridden off the puck. That’s ok, he should have support. But he didn’t, because both Sharp and Versteeg kind of floated around like they just inhaled some noxious gas which gave Mike Richards all the room in the world. I want to blame Handzus, you know I do, but he was actually beating it to where he sensed danger. He just couldn’t get there in time. and there you go.

-So ok. Bad goal to give away at a bad time. You still have the lead in the 3rd. Should see it out if you are who you say you are. So what can’t you do? Take a selfish, dumb penalty 100 feet behind the play. But keep icing Brandon Bollig, and that just might happen.

We said it before the series, and the Hawks have been lucky in that for six straight series before this they were confronted with limp dick power plays, including L.A.’s last year. Well, this isn’t last year’s L.A. power play. Give Kopitar, Doughty, Carter, and Gaborik an unnecessary look and you’re going to fucking pay. And they did.

-As for how it went from there. Well, I feel the balance between the too many men they got called for in the 3rd and the one they didn’t that led to Smith’s goal is probably about the same.

-As for the 4th goal that basically ended it… I don’t even fucking know. Rozsival and Leddy both stopped, Kane didn’t, but the other two forwards did which left Toffoli open. Some bad luck, some idiocy, game.

-What kind of has me worried is that the Kings got this one and they still basically got nothing from their top line. And now they get to choose who that line faces in the next two games.

-I’d hope for better, but the third line of Sharp-Regin-Versteeg got absolutely ass-clowned tonight and mostly by the Kings’ 4th line. Whether Sharp is hurt or tired, basically he needs Hossa on the other wing to do everything or he’s Casper’s twin.

-At least on the plus side Kane and Saad were able to drag Handzus into something resembling even-strength competence, though that offensive zone penalty would have gotten a handful of other Hawks forwards launched into the sun.

-Oh and Michal Handzus won 4 of 16 draws tonight. So remind me what it is he does again?

-There was a lot of good though. Like, Nick Leddy’s backhand. Seriously, did we know he had that in the holster?

-Q once again matched up his 4th line against the Kings’ 2nd line, which was the most dangerous last year and again this year. And they can’t handle it right now. If both top lines are going to play to a standstill as they did tonight, then letting the Kings’ second line run riot while yours is staring at Handzus stumbling up the ice probably isn’t the way to go about it, hmmm?

One last thing. The Hawks have carried this for 2/3rds of the series, 4 of 6 periods. They’ve done it because their forwards are exponentially faster than the Kings D. So why wouldn’t you opt for even more speed in the lineup when Shaw returns?

All that said, it’s only one. Getting clowned at home might actually spur them to come out with some piss and vinegar on the road (though the Hawks haven’t won their first road game in a series since the Sharks in ’10). They only need one, and even if they don’t get it both the Sharks and Ducks have managed to win three in a row against the Kings this playoff. The Kings are an underwhelming 3-3 at home this spring. Wearing the dunce cap for two days probably could only help.

At 1-1, the Kings only have what the Hawks allowed them. So they don’t have to allow them any more.