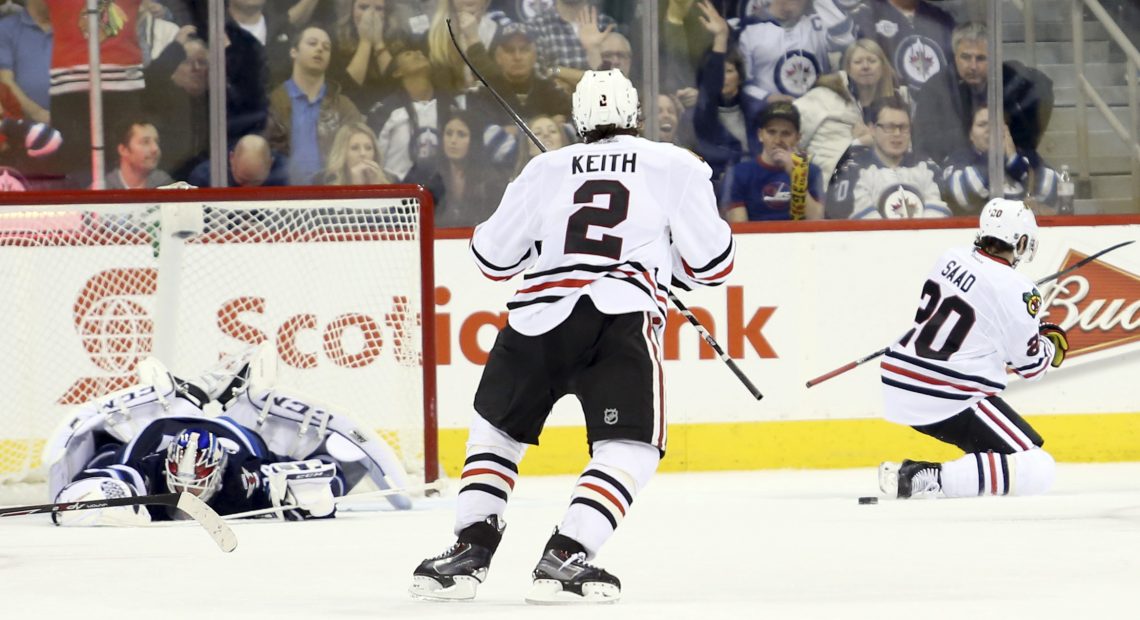 Michael Hutchinson stopped 91% of the shots thrown at him tonight and that doesn’t come close to his season save percentage against the Hawks previously this season. In their previous three meetings, Hutchinson only allowed 3 goals on almost 100 shots.

Tonight, (not surprisingly) the Hawks played a much tighter defensive game only allowing 21 shots on goal. Conversely, they were pretty conservative on the offensive side, only generating 22 shots on net.

With both teams playing it very close to the vest, high percentage scoring opportunities were few and far between. If it weren’t for a referee’s skate getting in the way, you could make the argument that the Hawks could have turned the table on the Jets with a 1-o win of their own. Alas, there’s not much to fear when Patrick Kane gets more than a few inches of space a couple times a game.

–As I mentioned, the Hawks were much tighter defensively than they have been for awhile. The Hawks were collapsing within the hashmarks in the defensive zone, eliminating a lot of Winnipeg’s shooting lanes. The majority of the Jets’ chances were coming through transition when they were able to shake the Hawk defender or isolate an odd man matchup.

And for all the hitting Winnipeg did, it certainly didn’t create much offense or turnovers from the Hawks defensive corps.

This is quite encouraging.

We’ve been bitching about suppressing the shot totals. That happened significantly tonight. Can’t be angry about that.

–David Rundblad didn’t crack 4 minutes in a game where everyone else played more than 10. I feel kind of bad because while he did get beat in the corner, that was a pretty fluky bounce off of a referee’s skate to lead to a goal. And if that happened to Michal Rozsival, does anyone really think he only gets three more shifts in the game?

That being said, it’s becoming quite apparent what Joel Quenneville and Mike Kitchen think of David Rundblad, a player that Stan Bowman acquired for a 2nd round pick. But hey, two Cups.

–The first two times the Hawks lost to the Jets, it was slightly disheartening thinking they were getting beat by a clearly inferior opponent. After four viewings, it’s pretty clear Winnipeg is no joke. Assuming they right the ship after this rough patch, they are going to be a nasty playoff team for whomever they draw. That building is going to be rocking for their games and they are incredibly physical. The matchup against Anaheim, Nashville or St. Louis will play into that style and it wouldn’t be a shock if they win a round.

–We mentioned a few games ago that it appeared Johnny Oduya was trying to jump in the play offensively more often. Sure enough, Oduya had a quote before today’s game that that was exactly what’s he been trying to do to help break out of his recent struggles.

Oduya played a solid game for the most part even with Winnipeg flying two forecheckers at the Hawks defense for the majority of the night. A 2-1-2 forecheck was usually what gave Oduya fits in the past. For him to play as well as he did tonight even though his season has been a struggle has to be an encouraging sign for a hopeful upswing in play.

–Patrick Kane. That is all.

–The pass by Brad Richards to Kane on the first goal was pretty amazing. With three Jets looking to murder him, having the presence of mind to wait that extra split second for the passing lane to Kane to open is why he’s been an offensive star throughout his career.

–With the Blues getting clobbered by the Blue Jackets tonight and a matchup looming on Sunday, the Hawks can close the gap to 4 points followed by a 8 game homestand looming where they can really clean up. So while two nights ago all seemed lost, home ice advantage in the first round doesn’t seem too far off.

Until we meet again.