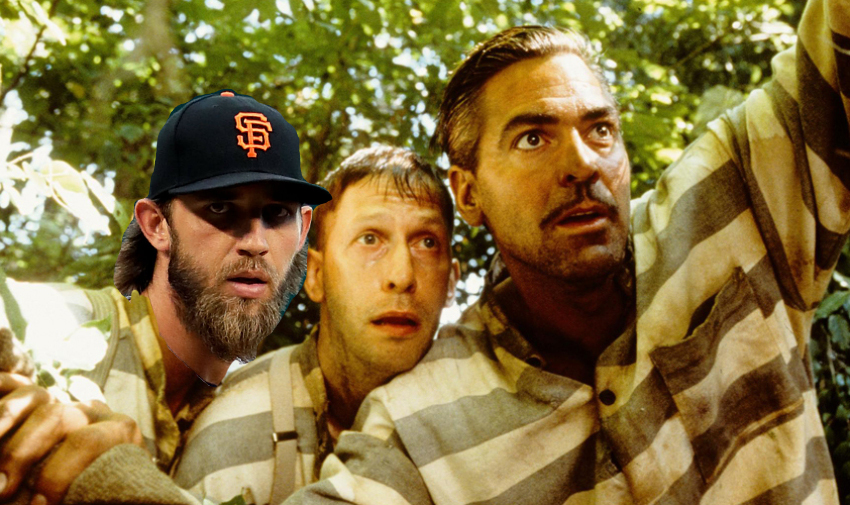 There will be no bigger name on the move in the next week or so than Madison Bumgarner. That’s what happens when you get tabbed a playoff hero, seen as someone who can still swing a playoff series (rightly or wrongly, and mostly wrongly these days), and also keep your name in the headlines by being a miserable son of a bitch. Bumgarner checks all those boxes.

The first thing to clear up about Madison Bumgarner is he’s not THAT good. Through most of his career he’s been a low-level #1 or a high-end #2, which was fine when the Giants had Lincecum and Cain in front of him and worked out well when he did pitch like a celestial being for a few weeks in 2014. Since he came into the league, he ranks 13th in WAR, which is good but is also right on par with Gio Gonzalez and Anibal Sanchez and yes, Jose Quintanta (who has made 40 less starts than Bumgarner in that time). He’s not a Sale or Scherzer or deGrom or anything like that, though sometimes it feels like he’s billed as that because of 2014.

So what would any prospective team be getting from this Madison Bumgarner? One, it’s a healthy one finally, as MadBum only threw 241 innings the previous two seasons dealing shoulder problems caused and not caused falling off his dirtbike looking for various woodland creatures to cook over an open fire for dinner that week. Bumgarner has already thrown 125 innings this year, which pretty much matches last year’s total.

And those innings have been much more effective. He’s striking out far more hitters (9.10 per 9 vs. 7.57) and walking less (1.86 BB/9 vs. 2.98). His ERA is strangely worse but his FIP is much better. Also strange for a pitcher of Bumgarner’s age is that he’s gained some life on his fastball this year, averaging over 92 MPH on it for the first time in four seasons. That’s probably something to do with health. His curve is also getting more sweep, picking up horizontal movement without losing its tilt. It makes it more slurve-y, which isn’t ideal, and maybe why Bumgarner is using it far less than he did last year.

There are some warning signs with Bumgarner as well. One, his ground-balls are down measurably and the lowest rate of his career. Again, some of this is just because this is happening to most everyone, but a drop of five percent is more than one that can be dismissed as a sign of the times. And it’s been replaced mostly by line-drives, which is not good either. Bumgarner’s hard-contact rate is the highest of his career by a distance, and if he were to move to a park that didn’t require a bazooka to get a ball out of, that could turn into a real problem fast.

Recent outings only muddle the picture more. On the surface, Bumgarner has only given up three earned runs in his last four starts, But two of those comprised only seven innings combined, as rain shortened one start to two innings. The walks were non-existent, but there’s been a ton of loud contact in July (53%). Bumgarner has also lost a full MPH off his fastball in the month, which wouldn’t get anyone putting on their red shoes to dance the blues in excitement either.

The next question is what is Bumgarner worth. His contract being up after the season certainly lowers his value, and this is not Verlander or someone like that changing teams midstream. The Giants are probably dreaming about a package similar to Chris Archer netted the Rays last year, as Bumgarner is better than that. But it’s hard to find a teams as stupid as the Pirates again, and Archer wasn’t a free agent to be. That was two prime prospects, and any kind of bidding war probably inches the Giants toward that. What they may fear is a return that Cole Hamels provided the Rangers, which was a journeyman major leaguer in Eddie Butler, and a couple of lower-level lottery tickets that are nowhere near the majors. Bumgarner is younger and not struggling as Hamels was at the time, so the answer is probably somewhere in the middle.

Then again, it becomes a question of do the Giants move him at all. Logic tells you there’s no choice to be made here, and their window has shut and whatever they feel they might “owe” mainstays like Buster Posey, Brandon Belt, and Brandon Crawford are just going to have to wait a few years while they try and redo the supporting cast beneath them. And the way Crawford is playing these days, it probably doesn’t matter anyway. Still, the Giants are one of the hottest teams in baseball, and are somehow only 2.5 games out of the wildcard. Of course, if you have to go nuclear just to get to .500 and be within touching distance of a coin-flip game with four teams to leap still, that’s pretty much every answer you need on what you should do.

Bumgarner’s trade isn’t going to change the fortunes of the Giants as heavily as they might want. But it would certainly signal a change in direction for good, and put an official bow on their run. Even though those things are hard to quantify and shouldn’t matter, they make this kind of move hard to deal with for everyone. But nothing lasts forever, except the three flags in the outfield at Oracle.