Game #81 – Blues vs. Hawks Douchebag Du Jour: A Tage by Any Other Name 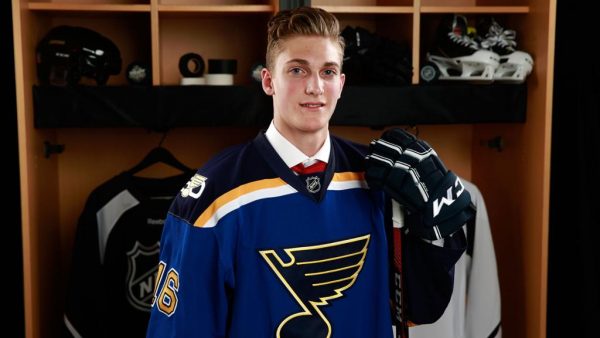 Full disclosure, I’m named after a flower. Sure, there was a great-aunt Rose somewhere back in my family tree, but she was long gone by the time my parents picked my name. Kids at school used to taunt me that I was a flower child and my parents must be hippies, which was bait I didn’t take since nothing could be further from the truth. So I get it that having an unusual name can give kids a reason to pick on you, and as we don’t really choose our names, that isn’t really fair criticism.

However, that won’t stop me from asking, what the fuck kind of name is Tage? That’s not a name. That’s not even a word. That’s not like a Kayden, or Madison, or Mackenzie, all of which have become inexplicably popular lately. Kayden (spelled in a million different ways) has become ubiquitous and so we’re stuck with it, kind of like what happened with the name Stacy back when I was a kid (you never heard of any Stacys in Laura Ingalls Wilder books or Little Women, so when the fuck did that one come around?) Madison…well, I may laugh at the idea of naming a child after a street and/or last name of a very old, dead white guy, but if you’re really trying to prove your Hawks fandom, I guess it could be worse. And we all have that rando friend from college who now has a kid named Mackenzie, boy or girl, doesn’t matter. Come on, you know you do.

But Tage? That sounds like a joke Rob Delaney made on Twitter about his muscular sons. It’s not a clever approximation of another existing name (Bruce was a common name, switching out the vowel for a Y made it Bryce, which is different but better). It’s not a random noun that sounds kinda cool as a name, possibly in the vein of parents like mine, who aren’t necessarily hippies but want something unique (Juniper, Piper, words you would find in a dictionary even if they’re not exactly your thing).

Nope, this one is just stupid. Even on a team of dumbass names (Colton, Jayden, etc.) this one takes the taco. It screams “I’m super-young white guy and all my life everyone made a fuss over my entitled ass.” And while this guy has played about half the year with the Blues, he’s not good enough to make his bizarre name cool: his nine total points (3G/6A) and 49.6 CF% do not a phenom make, and you’d have to be generational-talent good to turn that name into an asset, rather than a pointless curiosity. Besides, look at this fucking guy. That hair has “Tage” written all over it. But if he ever makes a real impact on the Blues roster, expect lots of St. Louis-born babies to be sporting a moniker as dumb as they are.

Tags: The fuck kinda name is this