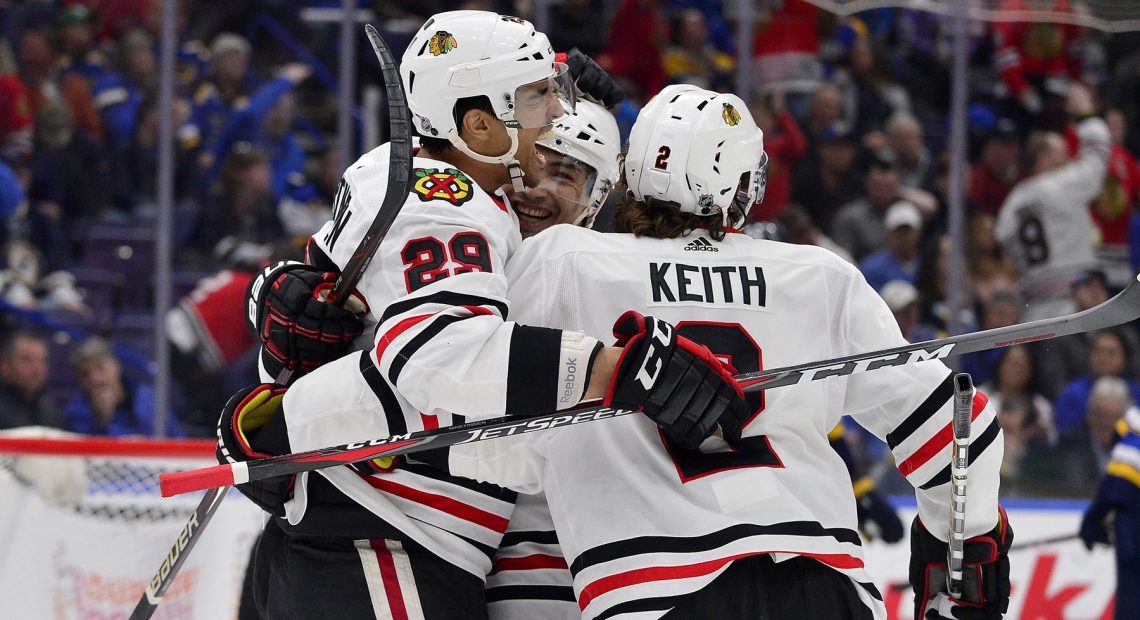 By every measure, the Hawks got their asses kicked in this game—shots, possession (in the first and second), faceoffs, you name it. And yet, they capitalized on the Blues going full-on Blue-ing themselves, and the Hawks are halfway towards fucking them over completely and keeping them out of the playoffs. To the bullets:

–It was a big night for Hawks’ nobodies. Both Andreas Martinsen and Blay Killman took their first steps toward what is assuredly legendary status with the Blackhawks with their first-ever NHL goals. And Killman’s was short-handed! (That’s his name, isn’t it? Ah, who gives a shit.) Everyone gets their 15 minutes, right?

–It was a bigger night for Alex DeBrincat, who now leads the Hawks with 28 goals. He just undressed Edmundson midway through the third to tie the game at 3. We’ve said it before and it’s no surprise at this point, but this guy gives me hope for the future, which is about all we’ve got. Well, that and schadenfreude.

–And it was an even bigger night for Duncan Keith, who scored is second—count it second—goal of the year, and the timing couldn’t have been better. Patrick Sharp drew a penalty late in the third and Keith was able to miraculously avoid all shinpads in the area and get the winner. Dreams do come true!

–All that’s great and not to be Debbie Downer here, but Connor Murphy had a rough one. I’m particularly bummed to see it come near the end of the season when he really needs to finish strong, both for his own confidence and as a fuck-you to Quenneville. But no, his turnover in the defensive zone led to Bortuzzo’s goal in the first, and his high-sticking penalty later that period resulted in the power play to start the second that set up Schenn’s goal (time on the pp had just expired so it wasn’t a pp goal but it was one of those situations where they were cycling and still riding out the man advantage). Murphy recovered his composure by the end of the second but finished with a 42 CF% for the night. Overall, not one for the highlight reel.

–In other tales of questionable defense, Tarasenko scored in the second period after Jan Rutta turned over the puck at the offensive blue line, but honestly, as he reached the zone, Rutta was alone with three Blues closing in around him, and c’mon, it’s Jan fucking Rutta, what did you think was going to happen? Pierre and the rest of the broadcast team lost their shit over him giving the puck away, but again, it was Rutta for god’s sake. It just felt like a matter of time before Tarasenko capitalized on an opportunity; Rutta has had way worse offenses this season than this one.

–All that aside, we fucking beat the Blues and severely damaged their playoff chances. Sikura had some flashes, Jurco had a strong game and led the team in possession, and Berube was just good enough…better than Jay Gallon which may not be saying much but so fucking what?

This is my last Hawks wrap of the season, people! Pullega and Hess are going to bring it home for you for the last two games. It’s been absurd amounts of fun, and I want to thank all of you for reading even if we don’t love the way the season worked out. Onward and upward!

Line of the Night: “Play like Scott Foster is in the net!” –Adam Burish, giving his best advice of the season.